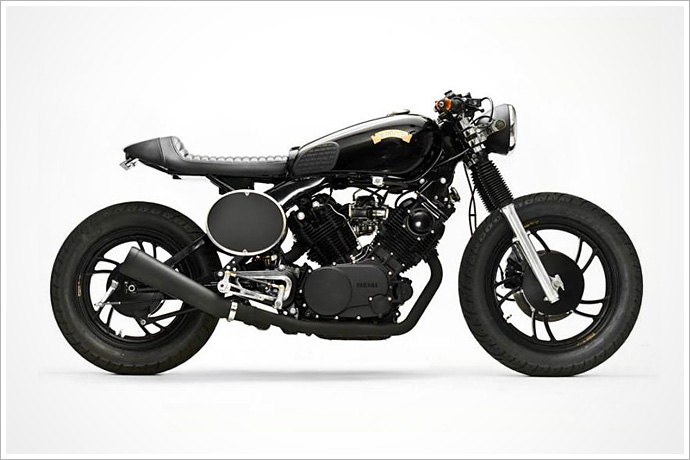 As a card-carrying member of the XV750 owner’s club, I’m always on the lookout for sweet examples of the species to share with you, our beloved readers. And if there’s one place on this planet that I’m almost certainly going to find the best examples of these fine creatures, it’s the sunny wetlands of Tampa, Florida. Specifically, they seem to congregate in large numbers around the workshop of one Greg Hageman, a.k.a ‘Doc’s Chops’. This breeder of beautiful bikes has just landed 1st place in the Yamaha Bolt build-off, but never one to stay in a place for long, he’s now back in his Florida nest. And just look at what he’s hatched up now… “This ‘82 750 Virago is one I’d refer to as a more budget friendly bike,” says Greg. “I made this to fit into the $8k range. Granted that’s not cheap, but you can’t skimp on the important things that still make the bike reliable, dependable and safe. Bringing a 30 year old bike back into the 21st century isn’t just a matter of a little paint and polish.” “In the pictures you’ll note I originally set it up with a single carb, but I wasn’t satisfied with the past 1/2 throttle performance, so I took it off and have now installed a set of new Mikuni VM34s. I’ve also been running them on my 920s for a while now. And man oh man, those things turned this anemic 750 into an animal; now she wicks quickly up to the 8500rpm redline with a smile. The 2-into-1 exhaust and muffler do their part, too.” “The front forks are from a 920 and are lowered 2″ internally and 1″ up in the trees. There’s also progressive springs installed. The front wheel is actually a rear Seca 18″ rim converted with a kit made by Matt Dunlavey. It’s running a pair of Kenda tires; 120/90/18 at the front and 130/90/16 at the rear. There’s Tarozzi clip-ons, Dime City Rearsets and a Dime City seat. I also build the bolt on subframe unit for these and sell them on ebay. It uses the stock XV750 tank and raises the rear about 3 inches to straighten up the lines.” “I blacked everthing out and had Craig Skivers from Craig Paints Bikes apply the tank black and the ‘Variant’ logos. All the other black bits were powder coated by Profab in Clearwater. I know a lot of people prefer the Viragos with the laced wheels. Well, the ones I use to convert them are apparently made of ‘unobtainium’,  so they aren’t cheap. And the rear rim must be drilled specifically to the correct offset, so I have to charge an additional fee to convert them. The Benelli tanks I’ve used on other builds also seem to be going that way. The whole idea with this bike is to have a quality starting point so it could be added on to later, or just ridden as is.” And the coolest thing about this build? If you like what you see here, you might be interested to hear that the bike is on eBay right now. I kid you not when I say that if I weren’t sitting here, on the other side of the world, I’d be begging my better half to give me the keys to the vault. Pleading even. So what are you state-siders waiting for?