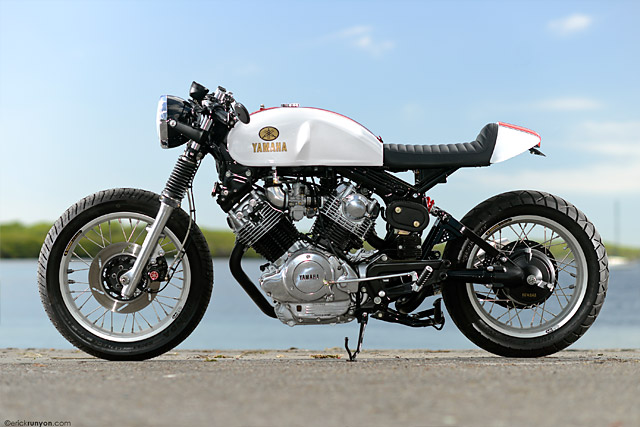 In nature, metamorphosis is a process where by a creature will undergo an abrupt and rather startling transformation. During this process, it expends a whole bunch of energy in a rather short period of time. Tadpoles become frogs. Caterpillars become butterflies. And nymph cicadas become, erm, bigger cicadas. Now you could argue that in the custom bike world, just about any restoration is a metamorphosis of sorts. But you’d be wrong. Because if you think that your new seat and fresh rubber has transformed your bike, think again. There is nothing in the bike world that matches the frog-to-prince change you see when an old Virago sheds its faux-Harley skin and becomes a bike like this. And no-one does Viragos like Greg from Hageman Motorcycles, aka Docs Chops. Here’s Greg. “Hi Pipeburn. Here’s a recent Virago build of ours. It’s an ‘82 XV920 which was commissioned for a gentleman from New Zealand. He basically gave me free reign to build what I wanted.” Sounds like most bike builder’s wet dreams. Ours too. “So I took ideas and learnings from all the past builds and then I added a few things I wanted to try out.” “After building several of these, the most important thing I’ve learned is to take the stock carbs and chuck them in the dumpster. Then I just replace them with nice, new Mikuni VMs. They idle and run much more consistent than the stock (and old) CVs. In the end, you have more torque and horses with the bike also easily revving to 8500rpm. And it’s not just for the 920s either; they especially help the anaemic XV 750s.” Taking a leaf out of Yamaha’s rather shiny racing history, Greg got to painting things. “Some of my favorite bikes have been the TZ race bikes, that’s why I used the decals and paint scheme I did on this one. You can’t go wrong with those colors on a Yammie.” The final bits of the build included the rear sets, handlebars and fork brace. This time greg chose an all Tarozzi ensemble, and modified some of the parts to fit. The front suspension is also modified and uses progressive fork springs. The rear shock, with its nice little flash of red, is a Hagon unit from the UK. The seat is the same type Greg’s been using for a lot of his recent builds, but just to mix things up a little he made a removable seat cowl. “Just so I could give it some more colour,” as he puts it. As always, Greg and the boys have knocked it out of the park. And if you like what you see, we’ve been lucky enough to receive another Hageman build, which is being ushered into the starting gates as we speak. Stay tuned for more.