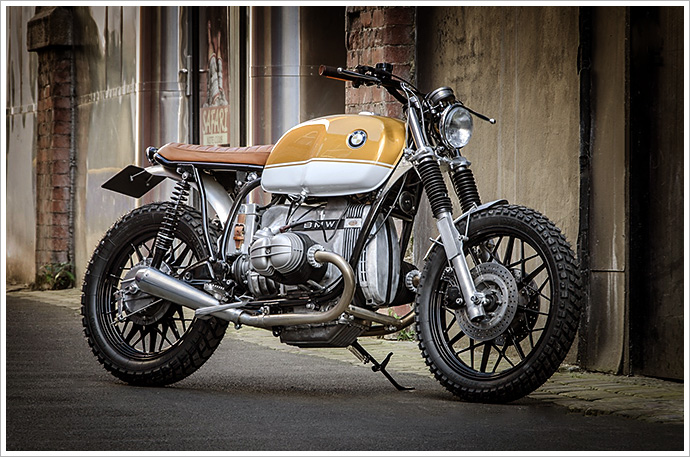 It’s the worst possible scenario for any bike builder. A project for someone ‘in the industry’. What chance have you got to satisfy a customer who’s seen it all? Someone who knows exactly what they want and isn’t afraid to micro-manage you to make sure they get it; someone who is about a likely to say ‘it’s up to you’ as Miley Cyrus is likely to keep her tongue in her mouth. Yet that’s just what Shaun and Carl from Down & Out Café Racers were up against when they took on their latest build. And who was this client, we hear you ask? “This is us,” begins Down & Out’s Shaun. “Me and my fitter Carl run a small UK shop building one-off café racers, bobbers and brat-style bikes. I started building them a long time back now; and although I originally built scooters around old Lambrettas, now we are focusing on projects around BMWs bikes. Specifically, bratting older-style BMWs.” “This particular bike was named ‘Gold Top’ by it’s new owner. Soon after we got the bike, an ‘83 R80, we decided we wanted to do a full range of bespoke parts for it. To start, we made a new bolt-on sub frame as most builders out there were simply modifying the old sub frame. Then came a new alloy battery box, a one-off head light mount, custom front fender and mounts, a new rear fender and a new leather seat. And that was just the start.” “When we got it to a good place, I sent some photos over to Dutch from Bike SHed fame to let him have a look. His reply floored me. ‘Can I have it,’ he said. I was in total disbelief as out of all the builders in the UK, he wanted the bike.

So after shooting some more ideas over to him on how we saw the finished product looking, the bike was stripped and sorted before we put it all back together and got it up and running.” “Over the following weeks I watched the bike come together,” says Dutch. “Shaun & I planned out the look and the spec, item by item. Having seen a zillion Beemer customs I knew what I wanted, but Shaun also had a clear idea of what he wanted to present to the cafe/custom community. Fortunately we agreed on pretty much everything.

By now you may all be getting bored with seeing so many BMW R-Series customs, but I’m really enjoying the fact that they are providing a staple, quality custom donor that is allowing so many people to join the custom scene at an affordable-ish level, and can be a scrambler, brat, cafe racer or whatever. Whether it’s a posh pro-build; completely remade, and as-new, or a shed-built Rat/Brat, they manage to balance being a proper rider’s bike with being something to be immensely proud of being seen on. They shift too. If you’ve never ridden one, prepare yourself for a big surprise – they’re not even heavy.” To finish, Shaun notes that he “just loves how these old bikes can look so good. It always impresses me. I’m happy to say it’s now treading the streets of London as Dutch commutes to work and back on it every day. For our first BMW build, it has turned out great. And we now have 3 more BMW builds on the go, including an R90 for my personal ride in 2014. Can’t wait!”