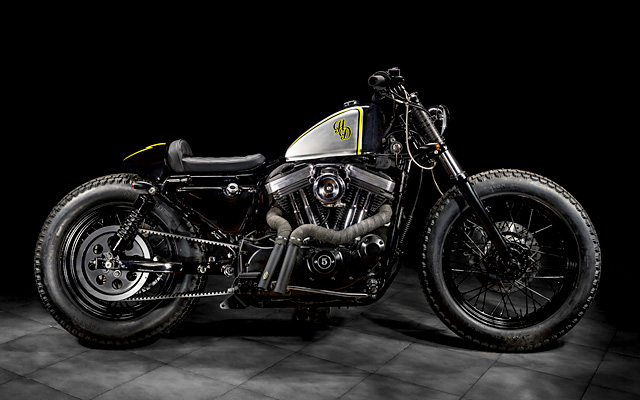 Nature has a way of telling us perpetually inquisitive humans when enough is enough. When our touchy little fingers and our peepy little eyes should just back the hell off. It’s called a sting. Whether it’s delivered via fangs, spikes or spines, you know it’s gonna hurt you. Maybe more. And for those who aren’t the sharpest knives in the drawer, it’s often accompanied by a visual cue, a flash of colour, to let you know that things are probably going to get ouchy should you choose to continue. But when the creature is the latest build from Macco Motors and it looks this good, to hell with the pain. After a quick hit of antivenom, Jose & Tito from Spain’s Macco Motors took the time to run us through their latest build. “Here you have our new bike, an ‘03 Harley Davidson 883 Sportster Anniversary Edition that we have just finished customising. We call it ‘the Sting’. When the boys first laid eyes on the bike it was a real mess; the Hog’s latest owner told them it had essentially been totally neglected for five long years. Add to that some amateurish, chopper-styles changes including a comically long springer front and we’re sure you’ll agree that the boys had a HD basket case on their hands. “It was rude, rusty and dusty. But it was also our first Harley Davidson commission, so we were excited, too.” “First of all, we cleaned the engine and brought it back to life. Next we sourced a pair of original forks and remounted them, which was an unbelievable improvement. Then we began to think about the overall design. To be true to our principles, we wanted to build something useful and smart. It’s what we try to do with all our bikes. Luckily, we had the permission of the owner to create a ‘Macco’ bike; something that we were free to make amazing without too much intervention from the owner.” The next big mod was to remove the standard (and huge) Sportster tank and replace it with an adapted, smaller 8 litre unit. “We worked on it to get the raw look you see here, and then we choose the glossy black and vivid yellow colour for the ‘sting’. Next cam Biltwell drag bars, a Bultaco 4″ 1/2 headlight with a protective grille and new digital speedometer.”

The lads then chopped the rear frame to add the lovely, rather wasp-like new fiberglass tail section. And over it, a new rhombus-patterned seat was attached that matches with the black Biltwell Thruster 1″ grips. “We attached some aluminium bullet indicators and a lowered rear progressive suspension set-up with bearing housings to adjust the shock length. Then a new air filter and two Avon Safety Mileage MKIIs; 5.00/16s on the rear and 4.00/19s on the front. Finally, we added some short and very fruity gringo exhausts and we were done. We hope your readers like it!”