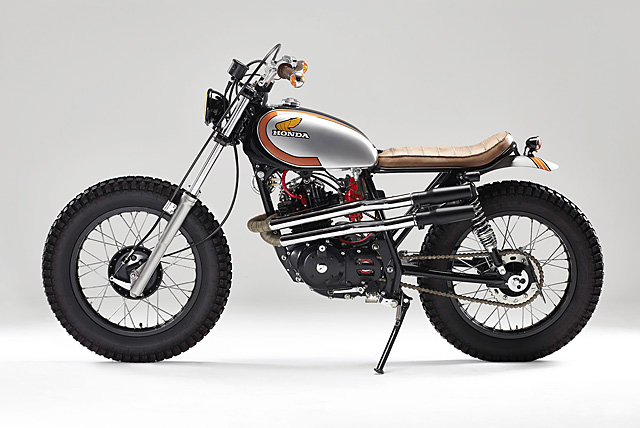 The financial centre of Brazil, Sao Paulo, is one of the world’s great cities, but on the surface it can appear to be just like any other sprawling metropolis. With an enormous population the biggest city in South America can be a tough and intimidating place to the uninitiated. But amongst the mix of high-rise buildings and historic architecture is a maze to be explored, filled with incredible bars, gourmet restaurants, art-house theatres and a 24/7 night life. To properly explore this urban jungle and find the hidden gems takes a special machine, it’s no place for a Sportbike and Cruisers are just too big. So local Carlos Eduardo Manso has built a go anywhere urban assault motorcycle that can squeeze through the tight spaces, handle the potholed back alleys and look the goods while doing so. It’s a 1984 Honda XL 250 that’s been given a custom make over with tip of the cap to the VMX scene and it’s ready to take to the streets. By day Carlos is a successful lawyer but he has grown up with a deep love for all things motorbikes, “When I started to have knowledge of the world of customising motorcycles, especially cafe racers and scramblers, I knew I would have to share the advocacy work with the customisation of motorcycles.” Not only did he have a desire to take off the suit and tie and get his hands dirty but it was a necessity given the distinct lack of custom bike shops in the country. Unlike Argentina and Colombia, the new wave of custom motorcycles is only just catching on in Brazil and being the smart man he is Carlos has founded C2R Custom to service this growing market. To get this project underway he picked up an ’84 XL250 that was in fair condition, sure the pipes were rusty and it needed new tyres but it was no basket case. However Carlos had very particular plans for this bike and it meant getting the it back to a bare frame and boxing up all the ’84’s extras. With the bike stripped back, the angle grinder was unleashed on the frame cutting back the subframe and supports all the way forward to the centre posts. The swingarm was also ditched as Carlos planned to do away with the mono-shock Pro-Link suspension that had become standard on many Honda’s by the 1980s. The front half of the frame was smoothed out before a new rear section was designed and fabrictaed that takes a similar shape to the XL’s of the early ’70s. But with a custom seat in mind the rear is now shorter and features a neat upswept hoop section complete with intergrated fender mount. At the join of the subframe and its supports each side received new shock mounts that were welded in for what was to come. A ’70s Honda swingarm was then modified to fit the newer frame, with a set of new bushes added before the whole lot was sent off for some hard-wearing black powder coat. With the frame back in his hands and pieced back together Carlos was ready to begin the work to lay out the design he had in mind. But getting the vintage look when working in Brazil is not as easy as one might first think. “The hardest part was to harmonize the new chassis with the new balance for the bike, stay proportional and also the difficulty of finding parts in Brazil.We have nothing of first-rate equipment here, all parts were imported!” One of those imported parts is the straight as an arrow vintage tank from a 1974 Honda XL 250, which was fitted up to the frame with new mounts. The tank might appear small but it actually has an increased capacity over the South American delivered ’84 model and it looks a million times better. To match the tank a new rear fender was also taken off an older model XL, which was chopped and then fitted to the mount that Carlos had prepared earlier. After the body work was mocked up, it was time to select a paint combination and this one comes straight from an old Honda catalogue. Both the tank and fender have been given a base coat of silver, with orange graphics broken up with black striping. But on the tank there is extra lashings of the dark hue that covers the top of the tank and the awkwardly designed factory mounting points that in black seem to fade away. Honda factory graphics were laid down on the tanks side before the tins were given a final clear coat and with a chrome filler cap on top rarely has an XL tank ever looked this good. Sticking with the vintage theme but moving away from anything strictly VMX the brown leather seat adds a touch of style to the Enduro base and has been shaped to match both the lines of the frame and the mounting point of the tank. Of course the bonus of starting with an ’80s XL and then making it look like its older sibling is you get the running gear from the more modern bike and it’s well worth the extra effort. The revised donk did away with the dual counter balancers and the 4 valve, 249cc engine received a single cam driven balancer, an extra gear making 6 speeds overall and 12 volt electronics, all in a lighter package with more torque. The engine was given a total refresh before being resprayed in black engine paint and it looks better than the day it left the factory. The larger 28mm Keihin carb was re-jetted to suit the exhaust modifcations to come, painted in a heat proof red paint and fitted up with a pod filter for a throaty induction roar. Designing the exhaust Carlos was after a more scrambler like appearance and so hand crafted a stainless steel system that runs the two pipes down the left side of the bike and finished with twin hot dog cans in black. Heat wrap haters will be happy to see only a small section of the pipes covered to prevent the downtube becoming a heat sink and the rest of the chromed system left on full display. Having previously put the work in on the frame for the new twin shock setup it’s back to the future with a pair of progressive rate springs on adjustable shocks providing the vintage look. Up front the factory triple trees have been powder coated black while the air assisted telescopic forks have been given a full rebuild to handle the new geometry change. Braking is Honda’s leading/trailing actuation setup that while not favoured in competition is spot on for the urban jungle and the hubs got sprayed with powder too. These have been relaced with stainless steel spokes to new black rims that are wrapped in a front and back matching pair of Pirelli 18″ MT’s. These not only give the bike a flatter stance as opposed to the factory nose in the sky look, they’re the perfect tread for a go anywhere machine. To finish out his build Carlos kept things simple wanting the core elements of the bike to take centre stage. A small yellow lensed headlight has been fitted up front with the rear fender now playing host to a vintage tail light. There are turn signals at both ends with bar end items up front, a set of cleaned up switchblocks, new grips and a single speedo getting the job done. “I could have spent much more money to customise this bike, but the goal was to make a beautiful, vintage and inexpensive bike.” Which seems perfectly logical to me when you can create such a magical little machine and still have some dollars in your back pocket. And having seen the collection of vintage Japanese fuel tanks Carlos has got his hands on expect to see a whole new wave of incredible bikes coming out of C2R Customs and Brazil!