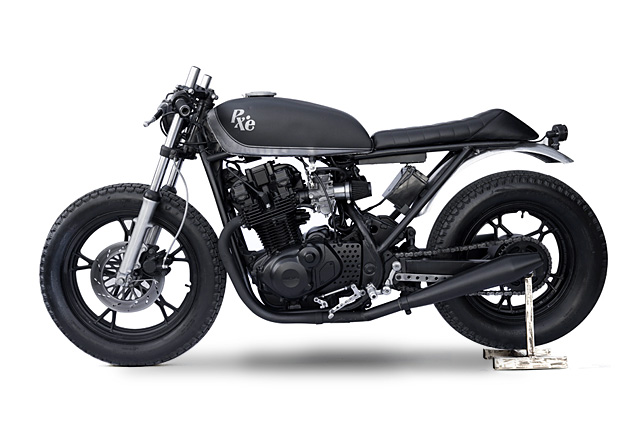 Want a quick and easy way to sort bikers into ‘buyers’ and ‘builders’? It’s easy – just talk about a tragically unpopular model. See, a buyer will judge a bike on its factory form. These are the guys that think showroom looks are somehow hard-wired into a bike’s DNA; the guys who will dismiss an entire model or range because they don’t like the size of the headlight or the shade of red on offer. Then there’s the builders. These are the guys who can see beyond the superficial to appreciate the soul of a bike, no matter how ugly it’s superficial, outward appearance. Italy’s Anvil Motociclette fancied themselves as the latter, and to test the theory they took on the challenge of customising the optimistically named Suzuki GR650 ‘Tempter’. It didn’t tempt us before, but it sure does now. The Anvil ‘Pixie’ Seiemmezzo (or ‘Six Fifty’) was originally a Suzuki GR650 from 1984. The donor bike wasn’t exactly loved by the Anvil boys at the start of the build. “It is definitely the worst starting bike we’ve ever worked on,” says Anvil’s Marco. Calling it after one of the world’s greatest bands sure raised the bar, as did naming it anything but ‘Tempter’. “The only reason why we decided to bang our heads in frustration to get this bike looking beautiful and loose hours of sleep in the process was its engine.” Large parallel twins like this scream ‘classic motorcycling’ from the rooftops in an unmistakable British accent, guv’nor. The boys had eyed the model even before the build began, flagging it as a possible base for a customer who was after a bike with a traditional aesthetics wrapped up in a fresh, Anvil treatment. “We’d come across this unfortunate model launched by Suzuki in 1983. It was so unpopular in Italy that it was available for only two years. So we started toying with the idea of ​​a two-cylinder build, a choice motivated by trying to give the customer a lightweight and manoeuvrable.” On paper alone, it’s not hard to be impressed. 650cc’s, 51CVs (Italian for cavalli vapore, or steam horses – a tax horsepower measurement) and only 180 kilos – on paper it has Kawasaki’s infinitely more popular W650 licked. But those aesthetics. Oh, the horror. “After the purchase of the bike we started the complex task of the transformation. First, we completely cut the back of the frame off and then we rebuilt it from scratch with a new set of lines that suited our look a whole lot better.” From the Japan-meets-Harley, chopper-esque beginnings, Anvil have clearly worked hard to transform the GR into a light and compact café racer with a touch of brat. The factory handlebars have been replaced with two Tommaselli clip-ons. The stock ‘chrome spittoon’ headlight has gone – replaced with an agricultural item that’s now small enough to be able to fit between the middle of the front forks. “Instead of the old ‘elephant saddle,’ we made a seat tailored in a ‘Giuliari 70’ style and the rear fender is now a brushed aluminium unit. The horrendous mufflers were removed and were replaced with two torpedoes from an old Norton. The filter box and tray under the seat were dismantled and removed. Now thanks to two stainless steel flanges, there are cone filters that help with the new muffler’s freer flow.” Thanks to the 16″ rim at the rear, they were able to mount a tire with a nice, deep profile. This change has clearly helped delete the bike’s original Easy Rider stance and has given the build a much more sporty appearance. Pronto! ‘The visual strength of the bike is definitely the tank; it originally belonged to a Kawasaki S3 two-stroke. We reshaped it on the inside to allow it to fit on the new the frame and, as with all our builds, we left the wear and tear intact before painting and decorating.” “The bike now looks better, and the mods make it agile and great fun to ride. It looks fast, but it’s enjoyable even if you do not want to travel at ten tenths. The riding position, without rear sets, is quite comfortable. And while it’s not a bike you’d welcome on long trips, this set-up does not exclude weekend get-aways from the city should the mood take you.” And we guess that with a bike like this, it would take you. Often.