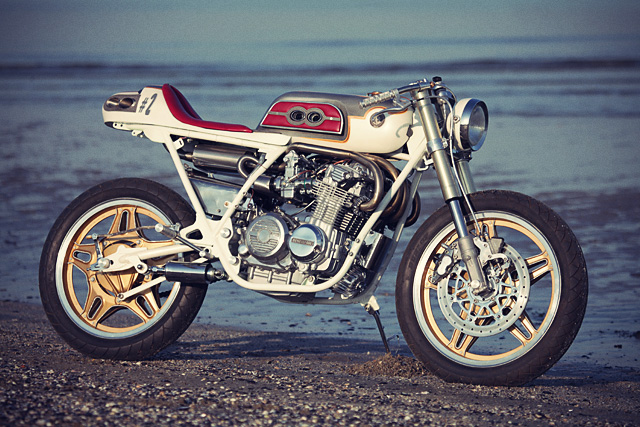 You have to admit, the global custom motorcycle scene at the moment is anything but boring. While the current generation waxes lyrical about their new-school café racers and brats, the old school revel in their baggers, billet and bobbers. Each to their own, we say. But what if your own isn’t one or the other? Well, here’s a perfect case in point; Bologna’s Inglourious Basterds Cycles. Equally comfortable with classic Americana builds as they are with old-school bobbers and retro racers, they’ve just taken their second AMD trophy in as many years with a bike that couldn’t be more different from their previous builds. Introducing “Madiba.” The boy’s Benelli 654 Sport is a build channeling a rather cool late 7os-style café racer vibe with some neat aesthetic and technical additions that make it a whole bunch of unique. “The idea of placing the air intakes inside the gas tank was really as an homage to the tradition of the in-line four and it’s unique ‘rack’ carb set-up,” says head basterd, Vincenzo Ciancio. “We wanted to take the bike’s defining technical feature and make it an amazing visual feature as well.” Other notable modifications to the bike include the rear suspension and the cleverly recessed exhaust pipes. “The rear was designed with a shock absorber working in an extension rather than a compression mode. It allows the owner to vary the geometry of the tail modifying the trim on the vertical axis as well as the stiffness/softness of the spring.” Vinny also notes that the hand-tailored stainless steel mufflers rotate the spent dino gasses upwards and past the carb intakes via a 2 mm reduction in the pipe’s diameter to improve the power low in the rev range. The muffler stage takes the exhaust pipes from four to two and on into a twin-hole escape port neatly built into the bike’s tail. “Considering that ‘Madiba’ was conceived to be a sports bike, we decided to make some of its newer parts out of magnesium and aluminium in an attempt to make the bike lighter and easy to ride. And if you look closely, you can also see our new ‘stardust’ metal finishing effect. It’s a brand new technique that adds a beautiful, shimmering on the bike’s rims and engine parts.” As the café racer concept is a sport, DIY and urban genre all rolled into one, Vincenzo was careful to balance the elegant, aggressive and sporty aspects of the build. But when it came to the trait that gave the bike its name, the ever-powerful biker idea of freedom was the clear winner. “The name ‘Madiba’ was given to the machine in honor of Nelson Mandela. We finished the build during the same night that the great man departed.” Vincenzo, along with his friend and workshop assistant Massimo, started the Inglourious Basterds Cycles project in early 2013. Immediately after they created “Calliope,” an Indian Chief which pulled in the gold at the 2013 Italian Nation Championships. Their second creation was “Bastarda senza Gloria” (or Bastards without Glory – the name of the aforementioned Tarantino film in Italy), 1st place winner at the 2013 AMD show. “And our latest is what you see here; a Benelli 654 Sport.” “In our company we manufacture and sell bikes, custom pieces and special accessories that are all handmade. Our motorcycles are conceived to be ridden and enjoyed, not just to be flaunted in showrooms. We are always excited to build new custom bikes for our customers. Interpreting their desires and needs, we hope to create machines that are perfectly suited to their owners. Our philosophy is to create one-of-a-kind motorcycles and our usual approach is to be as different as possible from all the other builders.” And in case you were wondering, it just so happens that Madiba is currently up for sale. Get in touch if you have a cool €27,000 burning a hole in your pocket. Trust us, your pants will thank you.