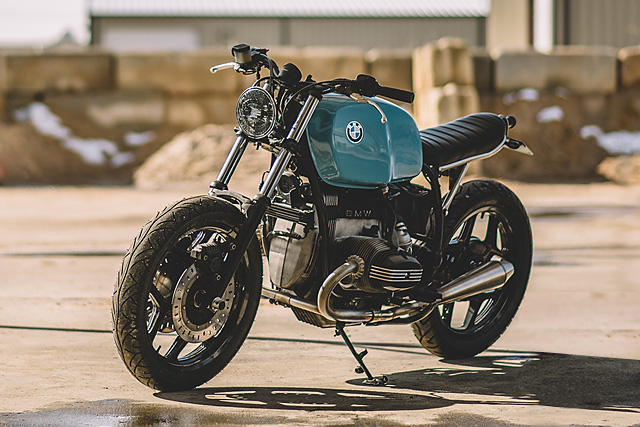 In this life, you’ll soon find out that there are friends, and then there are friends. Friends are the ones who will drop you home on their bike after you’ve had a few too many. Friends are the ones who’ll wash the vomit off the back their favourite leather jacket and never mention the night again – until your wedding day. And afterwards, they’ll take you aside and tell you that they skipped all the crap on your wedding registry list and decide to make you a custom motorbike instead. Needless to say, Junior Burrell from the Texan shop Retro Moto is one of those friends and this is the bike he made for his buddy. “My newly-wedded buddy had just joined the Air Force and he had a month until departure,” says Junior B. “We had decided to build him and his bride a bike. The plan was to get it done so they’d have two full weeks to ride it and enjoy each other’s company before he left.” Junior shopped around and found the perfect build platform at a local BMW shop called Perry’s. It was a stock R100 complete with a full fairing and all the options boxes ticked. “Not that we really wanted for those options, but the bike itself was a low mile example and it had just been fully serviced. Despite our luck, there was still a lot we wanted to do to it and with the timeline we had, we knew it’d be tough.” Without pausing for thought, Junior smiles and states that all the night were late nights were totally worth it. “We built it in six or so very late but fun evenings over the course of two weeks. It was in a great state and a mechanic had just been over the engine, so thankfully we didn’t have to worry about the mechanicals.” The two then stripped her down and started on the stainless subframe and alloy seat pan. Since Junior had mainly been working in stainless of late, the structural options for the subframe was an automatic choice. And the slick, brat-style seat to top it off wasn’t a difficult call, either. The new tubing was also drilled to allow the rear wiring to hide inside. “I  repainted the tank, hooked up the Acewell gauge and made a mount for the Hella light. The charge light was relocated under the tank, and a progressive suspension shock was bolted on. Then came the new tires and some powder coating for the wheels, along with a set of Renthal bars.” As the icing on top of the (wedding) cake, Junior added a quick reroute of the stainless exhaust into a spiffy new cone muffler, and finished with the world’s smallest sissy bar to wrap up the neat little tail light.

Naturally, Junior took it for a quick burn before he handed it over. “The ride is the best part; after dropping 80 pounds, she became quicker and much more agile. Torque is in abundance, even from the smallest twist of the throttle. She rides smooth and handles amazingly.”

“In the end we made our deadline and the newly wedded couple rode off into the sunset. It was enough to bring a tear to my eye… or maybe it was just the wind and the ash from my smoke. I can’t be sure.”