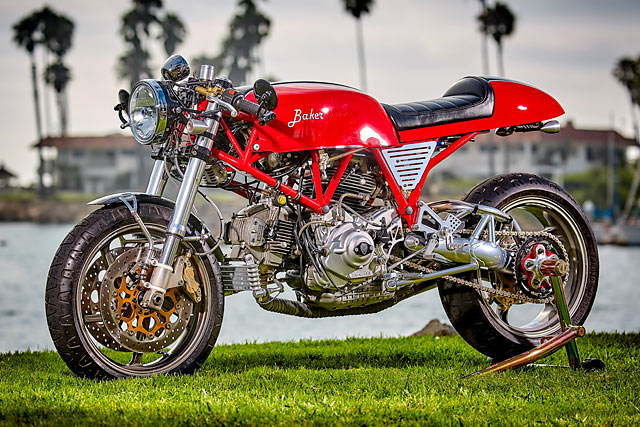 George Baker has an enormous, professional workshop at his disposal. Described by many in the scene as the ‘deathstar of custom motorcycles’, his premises also takes in a 200 seat cafe, a small theatre, a bar and a huge apparel store. Alright, that’s a lie. George Baker is just one guy, chock full of American ingenuity and determination based out of Southern California. A sucker for Ducatis, he’s created his own sweet caf’ based around a 900SS two valve Ducati. 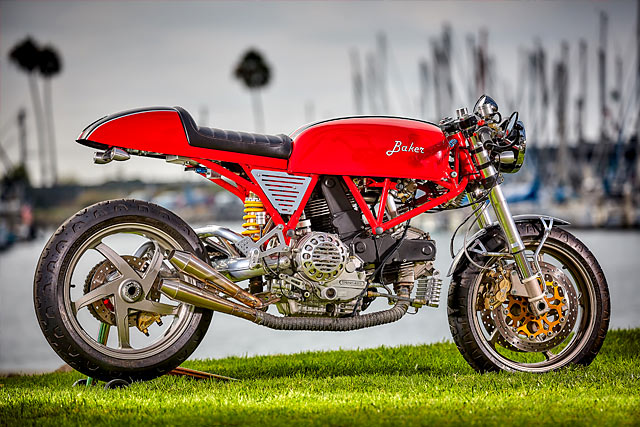 And it’s George’s first attempt at building a one-off custom motorcycle. “I decided the best way to go was to dive in head first and start from scratch rather than using a donor bike,” he recalls. “The thought process behind that decision was that every component and system would have to be thought out and made to work together with a vision in my mind of what a modern Ducati cafe racer would look like”. 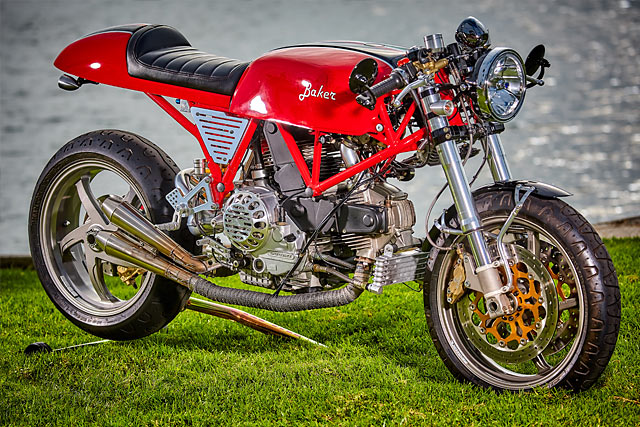 I know what you’re thinking – and George is all over it. “Sort of like my version of the Ducati Sport Classic line of a few years ago”. But it wouldn’t be as easy as tracking down a GT1000 and selling a kidney to get his hands on one. George Baker decided to build his own take on a modern Duke cafe. But there’d be way more challenges. “SoCal’s San Diego County, where I hail from has a wealth of talent in the custom bike scene, so connecting with knowledgeable and expert craftsmen is an easy proposition”. 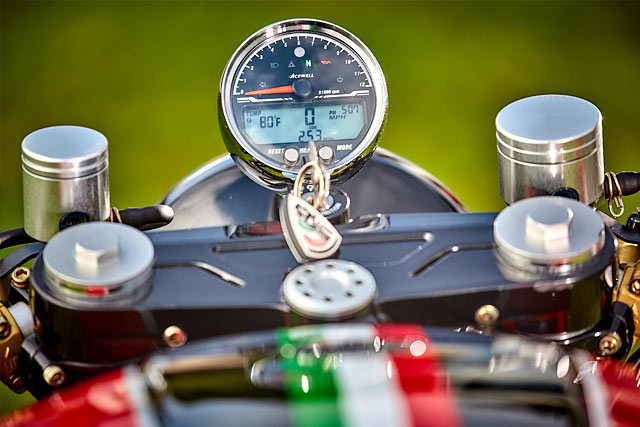 So with all that in place George started mulling over which Ducati powerplant he’d use for the build. And for him, the decision was easy. “I’ve owned a couple of different Ducati models in the past,” he says, “so I decided on a air-cooled two valve motor as the base. The engine’s simplicity and lack of needing to deal with the aesthetics of a liquid cooling system lends itself to a cafe racer design”.

[superquote]“I use the term ‘muffler’ loosely,” George says. “The decibel level is quite high.”[/superquote]

He went with a 900cc carbureted model as his basis. And he wasn’t too worried about the work involved – having put together a fire-breathing 1100cc Hypermotard in the past. George stripped down the engine and rebuilt it with new Mikuni carbs, matched to a pair of velocity stacks with filter elements – which was also a good reason to ditch the airbox and save some space. Aftermarket ignition coils and ignitors deal with the spark, while a new pair of shorty Cone Engineering steel mufflers round out the exhaust. “… I use the term ‘muffler’ loosely,” George says. “The decibel level is quite high.” 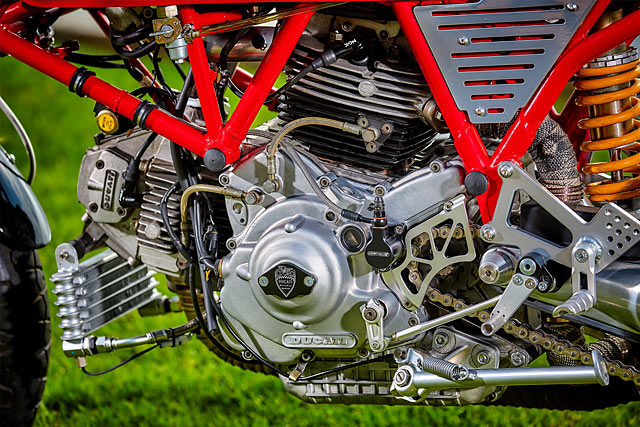 Now, Ducati snobs, this is the time when you best turn away. A new old stock 900SS frame was found to start the framework off. “One personal issue that I have with the Ducati trellis frame in a cafe racer build is the forced ‘vee’ profile taken on by the tank, seat and tail angles,” George says. “To give it a more traditional horizontal line like early cafe racers I used a 1979 Honda CBX fuel tank”. George apologizes to both Ducati fans and Honda nuts who might be slighted by this mix. But rivet-counting nazis from both scenes will appreciate the transformation that tank makes. 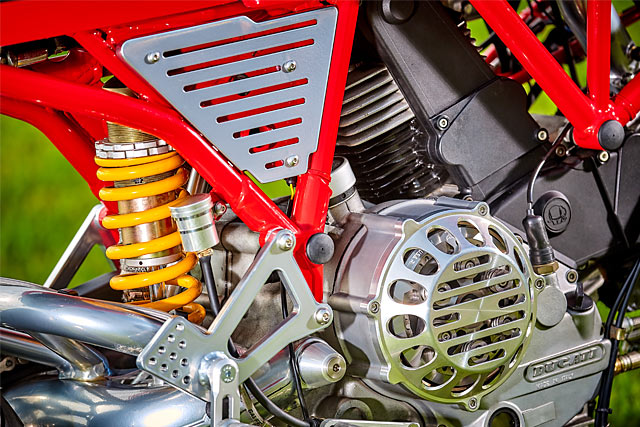 It seems like a minor thing, but the CBX gas tank is key to giving this bike such incredible lines. So we’ll dwell on it for a moment. The tunnel was cut out and a new one fabricated and welded in place, which allows it to sit down over the top of the frame rails. “Special thanks to Sal Peluso, a long time flat track racer and fabricator for his invaluable expertise and assistance with the tank,” George adds. A flush mounted filler cap keeps the top of the bike low. 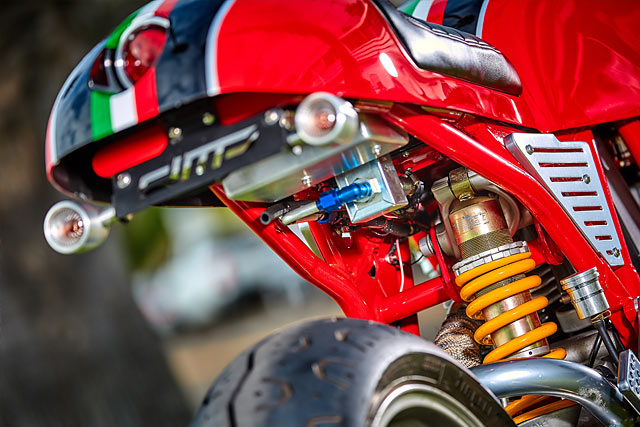 The frame also needed a bit of careful massaging. George cut the rear frame short, keeping the back-end of the bike nice and stubby. The upper frame tubes were also heated and bent to better match the line formed by the bottom end of the fuel tank. New lower supports were welded in place. 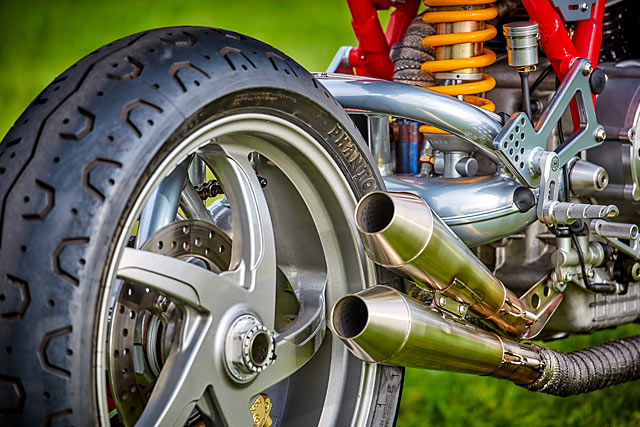 There’s so much going on with this cafe Ducati 900SS it’s impossible to run through it in just a few hundred words. There’s performance modifications like the beefy Brembo front brake set up, single sided swingarm conversion, wheel swap and Ohlins suspension. And a smattering of tidy aesthetic touches like the recessed brake light and gorgeous tricolour livery. But it’s when you take a step back and take in the lines of the bike is it truly impressive – and doubly incredible given it’s George Baker’s first tilt at a complete bike.