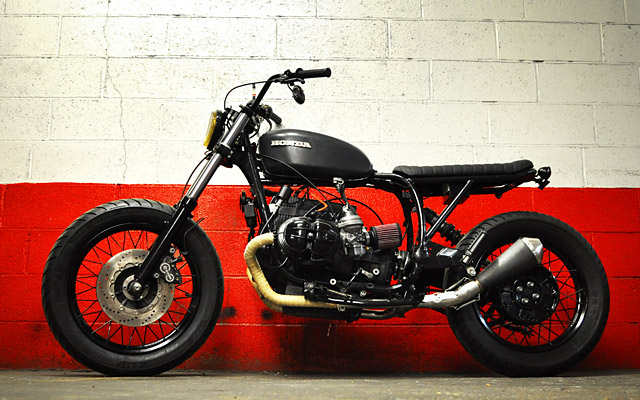 As the school ma’am cliché goes, “begin as you wish to continue”. Or maybe legendary Australian racer Peter Brock said it better, when he coined the phrase “bite off more than you can chew and chew like hell.” Whatever the case, we thought that we’d kick things off after our big redesign with the latest (and dare we say sweetest) bike from one of Europe’s best shops. Or should we say ateliers. It’s a rather svelte-looking BMW R100R , and it’s from those famous Frenchmen with a German name, Blitz Motorcycles. We ask Fred from Blitz to walk us through the build. Here’s the highlights. “The donor machine was a BMW R100 R from 1992, which was the last carburetor boxer engine ever produced by BMW. The whole engine has been opened and checked, but given it was only 3000 miles old, nothing needed to be changed.” “Speaking of electrics, we completely simplified all the wiring which also allowed us to mount the non-BM tank and the Blitz Motorcycles mini switches which control the starter, headlights, blinkers and horn. Then we mounted them to vintage Triumph handlebars with an aftermarket front brake and clutch lever. As you can see, we finished it off with little handmade brake reservoir.

The frame and foot pegs are in a dark grey powder coat, which is the same colour as the U-Boats of WWII

The wheels, handlebars, forks, engine covers, brake pedal and gear shift have all been powder coated in a shiny black. The frame and foot pegs are in a shiny dark grey powder coat, which is the same colour as the U-Boats of the Kriegsmarine during WWII. The real eye-catcher is obviously the vintage Honda CB125 S tank. For that we  chose the same dark grey as the frame, but in a matte. The frame had of course to be adapted to ‘welcome’ the new tank, too.” “For some finishing touches, we added a mini Bates tail light and hand-made some front blinkers which we mounted on the fork tubes; the inspiration came from the Stealth Speedtractor ones,with their blessing, of course! Then we stumbled upon a vintage rally car fog light and used it as the headlight, naturally with original yellow glass in place.” “The final mod was a 100% bespoke 2-in-1 exhaust pipe and stainless steel muffler made on our behalf by Hat-tech . Believe it or not, the bike now sounds just like a R1200 R.”

Chatting with Fred via email, we also nominated the exhaust as his favourite part of this build and looking at the hero shot above, it’s not hard to see why; not only does it make the bike but it also adds a rather lovely racing twist to the already intriguing brat-meets-scrambler vibe the Parisians have got going on. For more shots and all the other Blitz build, be sure and visit the Blitz site.