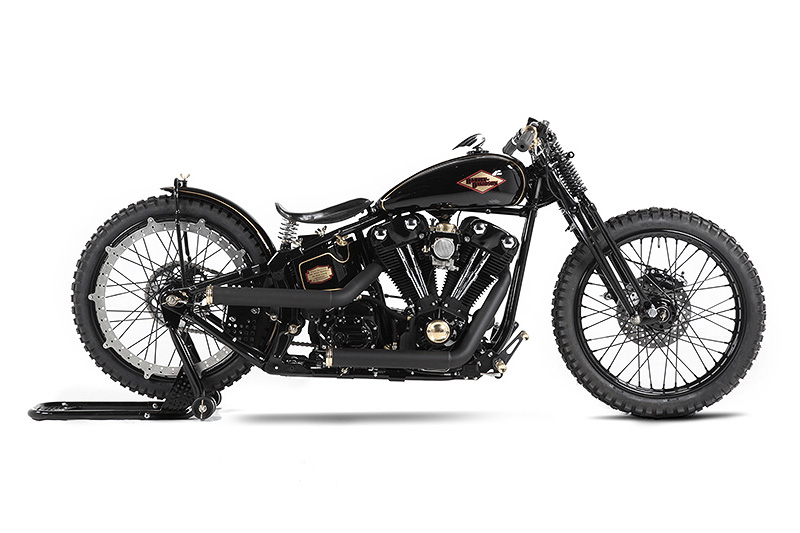 The AMD World Championships for 2104 have come and gone for another year, and as always there’s quite a mixed bag of new bikes to peruse. But what’s good to see is that some of the more traditional Harley builders are embracing new-school influences to move the game one a little. Less billet, more brilliance so to speak. One of those builders is middle Deutschland’s One Way Machine. Starting with a decidedly old-school, mid-ninties HD Softail, they’ve managed to build a boardtracker-inspired custom that is about as close to the original hog as Frankfurters are to sushi. Here’s their ‘La Salle’ Fat Boy bobber. “La Salle is our interpretation of a boardtrack racer,” says One Way’s impressively named Julian von Oheimb. “After a month of planning, some crazy attention to detail, and a whole bunch of fully qualified, university engineering know-how, we came up with this. We like to think of it as a kind of ‘next level’ custom done in a classical or traditional style – which is our real sweet spot.” As we all know, there’s been quite a few genuinely great board trackers builds done in the last few years. Mostly, they were built on old Panheads or Knuckleheads; some were even done on bespoke frames. For Julian, it would have been very easy to have copy those builds. But no. “Since One Way likes bikes that are a little more unique, we decided on a Fat Boy Softail from the 90s. So we searched high and low and eventually we found a really nice frame and an engine from the same year along with a whole bunch of other parts in the States.” Jools cleaned the frame, rebuilt the engine and trany, and restored the oil tank. “After that, I designed and made a lot of one-off parts. The main ones were the rear perimeter brake, the fork tree, the handlebars, all the brass parts, the fender and bracket, the swing arm modifications to fit the 21″ wheel… and the list goes on and on. Then, when I had the raw bike finished, I took all the parts to the powdercoater, painter, chromer and polisher. Once the parts were back in-house, I did the final assembly and a road test.” Reports are that it’s very rideable; most likely because the boys have kept the original Softail geometry, with no tricky rake or stretches. There’s the original Softail suspension under the transmission, some extra springs for the seat and even additions to the fork springs. “You can’t see them, but they are there,” notes Julian. “I intentionally ruled out balloon tires or anything else which could make it unrideable. For a Softail it’s very light and fast.”

Preempting the peanut gallery comments, Julian also took a moment to explain the tire choice. “Yes, I used the tires mainly for the look. But for this bike they perform more than well enough. Honestly, the only negative is if you ride over about 80mph; they tend to get a little noisy.” One Way had a distinct lack of customers for this build when it was kicked off; it was intended as a lock, stock and barrel build for the AMD championships and a little self-promotion thereafter. “In the end we sold it to a very happy customer in Romania.” For a bike that could drop jaws on Hollywood Boulevard, we could barely imagine what it would do down the main street of Bucharest. “And apart from the 2nd place in the Modified Harley class at the AMD show, it’s also got a further 12 wins under its belt including ones from Austrian and Italian shows. We couldn’t be more pleased with the results.” It goes without saying, but Julian and his metal-bending cohorts are definitely the guys to watch. Personally, we can’t wait to see what they reveal next. In the mean time, be sure and check them and their other builds out here and here. Tell them we said ‘hallo’.