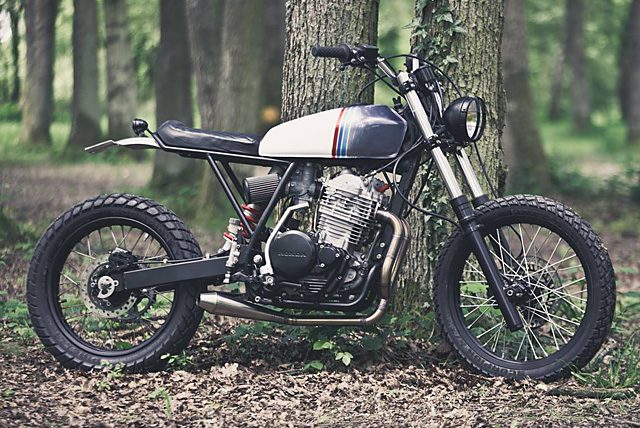 The historic walled port city of Saint Malo set on the French side of the English Channel can lay claim to hosting many important events in world history. But as the port of choice for the swashbuckling French buccaneers of the 17th century it’s hard to argue had they still been coming to shore today this wouldn’t have been their ride of choice. Quick and nibble, capable both on and off-road with the ability to out run and out manoeuvre local law enforcement and angry traders this 1994 XR600R Street Tracker is definitely the moto du jour. Built by a new workshop from the port city, Escapade Custom Motorcycles is the brainchild of good friends and business partners Allan & Jérôme. Not interested in the glitz and glamour of over the top builds and acres of chrome, they craft bikes that are all about a single purpose, the simple joy of riding a motorcycle. The two Saint Malo natives are unapologetically part of the second wave of the custom motorcycle renaissance. They draw inspiration from the likes of Roland Sands, CRD, Diamond Atelier and many others as well as taking design cues from old cars to modern art in their quest to create brilliant weekend warriors. Having already built a scrambler from the popular BMW R series platform they loved what CRD had done with an XR and found this 1994 example to make their own. An Enduro model with all the plastics, someone had decided to paint the entire thing black, straight over the existing rust and not bothering to remove a single part in the process. It was a mess, but as part of their new venture the build is as much about learning new skills as the end result and the rusty XR would do just fine. “We decided to modify it like the Apolo project from CRD, we love this project for is naked street tracker style.” Getting it naked meant removing all those ugly black plastics and with the body work stripped off the entire bike was taken down to a bare frame. With the rear subframe removed the stock main frame appeared to be in good condition and on its return from sandblasting it was deemed fit for use. Considerable time was spent on crafting the new subframe, with a particular focus on getting the transition from seat to tank just right. As a new operation without a workshop full of tools they had to use their ingenuity to bend up the metal precisely before welding on the new piece. With it now securely attached to the frame the whole lot was sent out for hard lasting powder coat in a black finish. With the frame up on the bench the kicked up rear end now wears a minimalist custom fender to keep the dirt off the riders back and allows for the neat mounting of the license plate. Then it was time to get busy with the part of the build that gave the lads the most satisfaction, having laid down the perfect foundation the seat and tank combo could be pieced together. The plastic enduro tank was just never an option but instead of going for the typical CB Honda unit they went a little left field and picked up a tank from an early CG125 commuter bike. The compact size fits perfectly with the design brief and with new mounting points created the road bike tank was secured to the off-road frame. With the fab work out of the way, it was time for the spray gun to come out and a base white was laid down for a classic look. “We love to mix modern and old-fashioned inspiration”, so instead of leaving it there, three candy colours have been applied in vertical stripes with heavy flaked grey featuring at the front of the tank. The seat too is an Escapade creation and one they are understandably very proud of, butting perfectly up to the tank the generously padded unit was hand stitched in-house. Of course the form of a custom XR is almost always secondary to the function and it is no different here with the legendary Honda single taking pride of place. With success in the Paris-Dakar and various dirt track and motocross events it was the Baja 1000 that truly cemented the status of the 600 version of the XR motor. The 591cc donk with its dry sump and four valve RFVC cylinder head defies everything we think about singles. It’s got the torque you would expect, but just when you think it can’t rev any higher it keeps going and produces even more top end power. To stretch that powerband a little further a custom-made exhaust runs down to the right side of the frame with a single Dime City Cycles reverse cone muffler screaming into the French air. The pod filter means the big clunky airbox has been disposed of and micro blasting and a lick of paint have the engine looking brand new. The standard wheel and suspension combination is great on rutted roads and sandy deserts but it’s all a little high and soft for a street application. So the front hub was removed and rebuilt before being re-laced to a 2 inch smaller than stock 19 inch rim. The rear wheel was given new spokes and the stock rim painted front end matching black before all-purpose Pirelli Scorpion rubber was fitted to give the Honda a surefooted feel on any surface. The standard forks might look basic but fully adjustable 43mm air adjustable units with Showa cartridges are no ordinary telescopic items. Lowered 5 inches along with the Pro-link adjustable Showa rear the street tracker’s centre of gravity is now much more suitable for carving up the urban environment. With a dry weight of just 134kg and having already removed the bulky bodywork the 2 piston front caliper on a single 256mm disc is more than capable of providing adequate stopping power. With such a passion for riding and a joy for bikes that are just a hoot to blast around on, there was no desire on Allan & Jérôme’s part to add unnecessary weight simply for the sake of including expensive accessories. The tail light is an old school unit perched on the new rear fender, while the grilled out bates style headlight gives the XR a tough demeanour. A single instrument provides all the information the rider needs, the rest comes from the seat of the pants, with new tracker bars sporting shorty levers, new switchblocks and grips. The end result is the perfect example of less is more and the lads couldn’t be more pleased “”It was a year of work because Escapade isn’t our job, just for pleasure and fun. We are really happy with this custom build, fun to ride and pleasure every time we kickstart the engine.” And it looks like the fun is set to continue, with four more builds under way the buccaneers of Saint Malo have a whole new mode of manic transport, so let the swashbuckling Escapades continue!