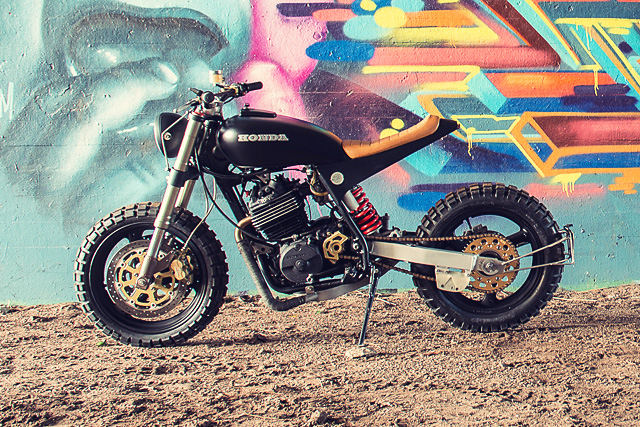 With the world of small custom bikes booming globally and being far more affordable than the outlandish choppers that were so popular 10 years ago, it’s no wonder small companies are using custom bikes as promotional tools. When you’re a surf store that focuses on the vintage look, a tough street tracker is the perfect choice. One 1994 Honda XR600 with extra black and bad ass please!

Just the second custom build by Jeroen Potters of Ozz Customs he was commissioned to have the tracker done in just 7 months. Normally you wonder who would commission a new builder and place a time limit on them, but Jeroen (Ozzy to his friends) is no stranger to speed. He lost a leg many years ago in a serious motorcycle accident, so rather than sit on the couch he built a trike and then for more than a decade has been a champion kite buggy racer and designer. And with the sort of behaviour that gets your friends branding you Ozzy of the Osbourne variety, the design for a blacked out, bad ass, urban assault, street tracker starts to seem like it was always in Jeroen’s head! There are plenty of reasons to pick a Honda XR600 as the basis for a Street Tracker build – one of the most successful Baja competition bikes of all time – a thumping single cylinder that’ll go all day and a dry weight of just 136kg. But dominating the Mexican dessert is not the same as being a successful urban assault vehicle and to take to the tarmac requires a drastic rethink of the suspension. Ozzy knew the perfect solution, swapping out the pogo stick like factory Showa’s for a set of different Showa items. Front forks from one of the great middle weight road warriors the Ducati 748 that instantly transform the bikes handling and appearance. But with such an impressive set of front forks Ozzy couldn’t leave his customer under braked with the tiny factor single disc, so putting his fabrication skills to work a set of adaptors was made to allow Suzuki GSX twin disc fronts to work with the Ducati Shocks. Having done this it made perfect sense to then use the same model Suzuki front rim. On many other bikes the logical next step would be to then use the Suzuki rear wheel as well, but a 160plus tyre on a tracker is just never going to fly. So believing in his skills Ozzy took another Suzuki front wheel and made it work at the rear of the Honda. Making stainless adaptors to not only run the Honda brakes but then doing the same so that a Honda sprocket could be run on the wheel as well, it’s brilliantly done and by no means an easy feat! With the Honda Tracker now having its function sorted Ozzy turned his attention to the looks and you can’t have a Street Tracker with a plastic factor tank. Back to the Honda parts bin and a CB tank was made to work with the XR frame before being sprayed in black and cleared in a matte finish. To get the proportions right Ozzy made the decision that there was simply nothing that could be done with the XR subframe, so he cut it off and started again. But rather than going tubular like most builders the subframe is in fact plate steel that not only acts as the seat support but gives the bike the look of solid body work while maintaining that all important negative space. This too was painted in the same black paint while the engine was given the wrinkle effect and then dried in a home oven. The loan contrast comes in the tan leather seat that sits perfectly into the new plate rear with only a tail light fitted for an ultra-minimalistic look. Now the bike is ready as a promotional tool and with the big knobby tyres taking pride of place it’s as visually drastic standing still as it is ripping up Dutch streets. With another bike under his belt and many more ideas floating around his brain, get set for the next Ozz Customs build as the Crazy Train rolls on, ALL ABOARD!!