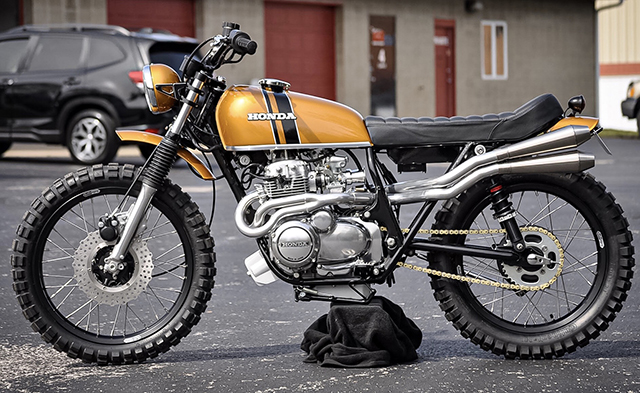 “You say you want a revolution. Well, you know, we all want to change the world” sang John Lennon in 1968. Honda Motor Co., Ltd. took Lennon’s words on board and between 1972 and 1974 the factory produced what would change the face of motorcycle racing forever. Soichiro Honda’s deepest memories were of the golden days of Honda racing, following his attendance at the Isle of Man TT competition in 1954. Here, his decision that the factory would build not Twins or Singles but the then incredibly revolutionary four-cylinder machines (Fours series). One of these being the 350 Four as a tribute to the Honda racers he loved so much such as Jimmy Redman and Mike Hailwood. 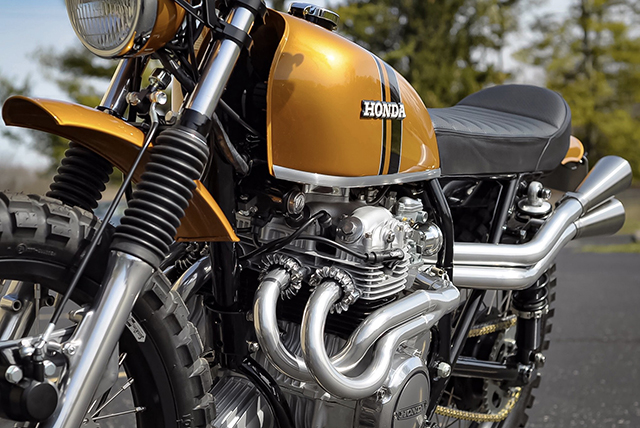 Today, almost 60 years later and in order to fulfil one of their customer’s idea of making the first 350 Four scrambler, Northbilt Customs are bringing back those memories of racing and smooth build with their radical “concept custom” CL350F. “The bike itself started with a CB350 four that was a true barn find and purchased for cheap. As it evolved, we began calling it a “concept custom”, which essentially meant that we built two bikes at the same time. A concept of the CL350F and then building a modern-day custom from that fictional model” says Bret Johnson, the owner of Northbilt Customs. 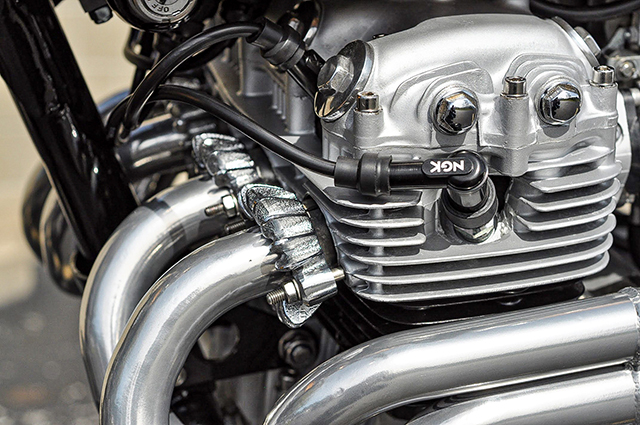 Northbilt has been representing quality, unparalleled craftsmanship and hard work for over six decades in America’s Midwest. It was originally founded two family generations ago by Dick Northam (the “north” in Northbilt), a driver, builder, team manager, chief mechanic, and speed shop proprietor in the IndyCar series, the United States Auto Club, CORA midget series, UMRA and several others for 40 plus years. Initially servicing the flourishing dirt track racing industry, it has now evolved into a full-service motorcycle destination. 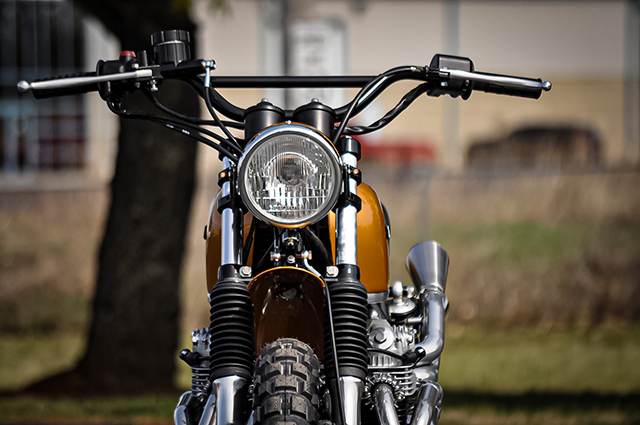 Northbilt Customs is now owned by Bret Johnson, Dick Northam’s grandson and a native of Indianapolis with third generation involvement in the professional racing industry of Indiana. His fabrication, design and mechanical skills are directly handed down from his grandfather and his father, Erik Johnson. The shop is located on Gasoline Alley in Indianapolis, which is one of several concentrations of custom fabrication shops in the city focused on the racing industry. 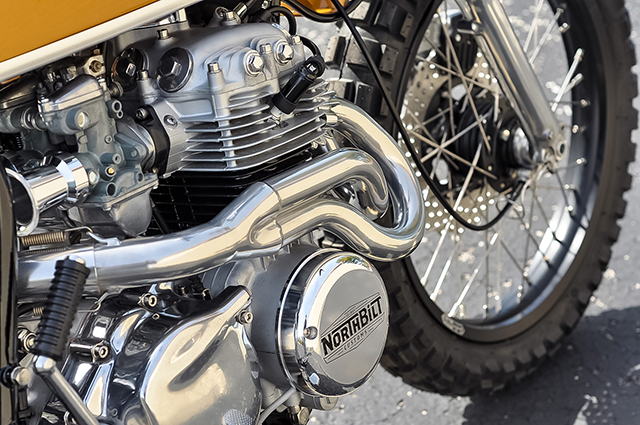 The concept started as a scrambler build and every component has been rebuilt to new specs, even down to every piece of hardware, which is 99% stainless steel. Frame and subframe have been modified extensively, giving the bike a balanced yet strong old school aesthetic. The forks and tank are from a Honda CB360. The bike features other in-house fabrication and design jobs such as new exhaust systems with 4-in-to-2 configuration, high front fender mount and gaiter grabbers, battery box, wiring harness, foot peg mounts, license plate mount and rear under panel. 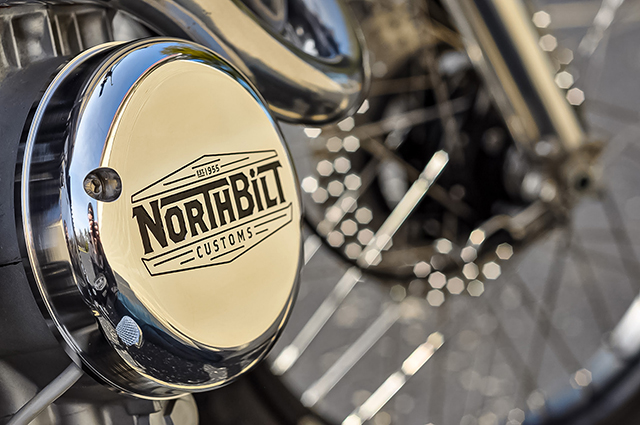 The engine is a stock 350 Four (347 cc) with Dyna electronic ignition – a time proven solution to the basic ignition needs of the vintage muscle bike. The wheels and spokes were sourced locally from Buchanan’s Spoke & Rim Inc. The tires strike the right balance between on-road grip and being just knobby enough to give the dreamy off-road traction. 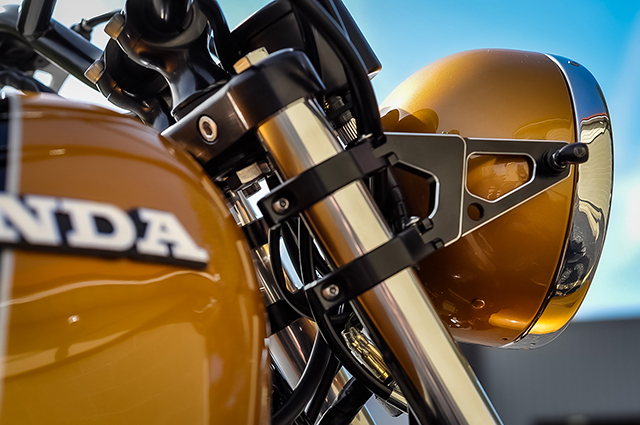 The shocks were custom built by Advanced Racing Suspension. The electrical system has been reorganised neatly under the seat. The last important piece of customisation that summarises the world class attention to detail provided by the Northbilt Customs crew is found in the painting. That Porsche yellow gold metallic with black and white threads across the tank give an old-fashioned, elegant-looking colour to the motorbike. 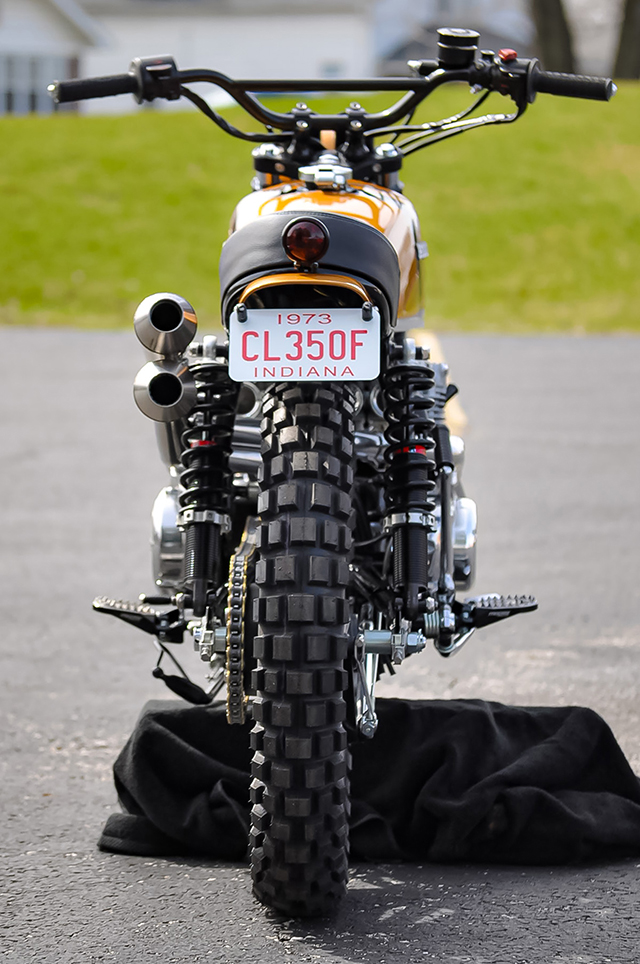 The project was completed in about six months. You can see the racing influence in the build throughout. It was built as an Urban/Street scrambler but not as a show queen. “It was a blast to build and the reaction has been overwhelmingly positive.” We resonate with that, Bret! 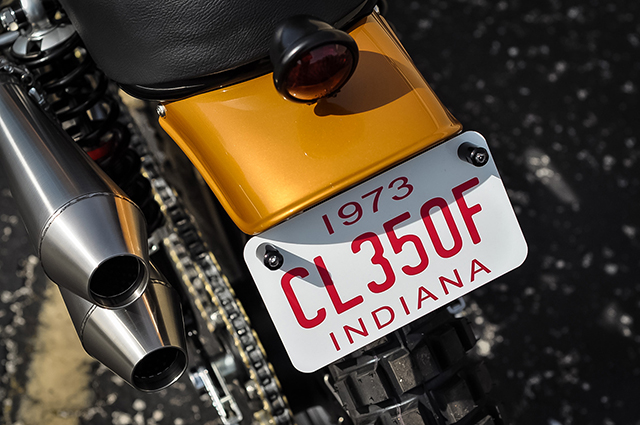 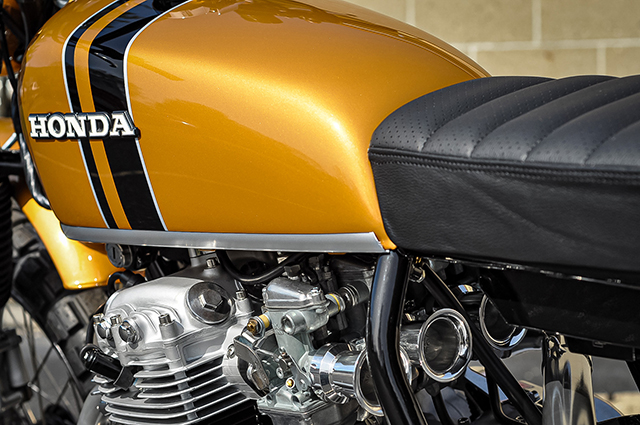 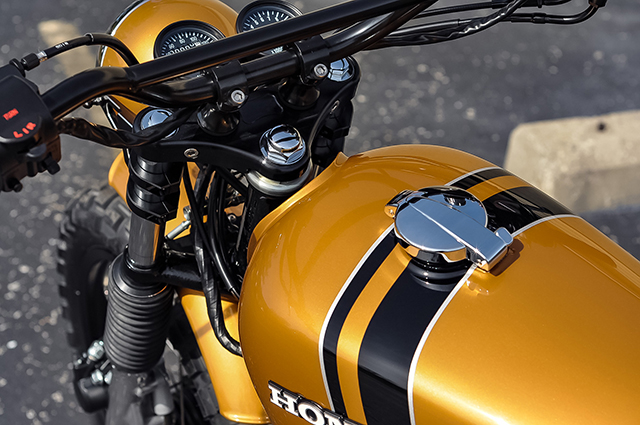 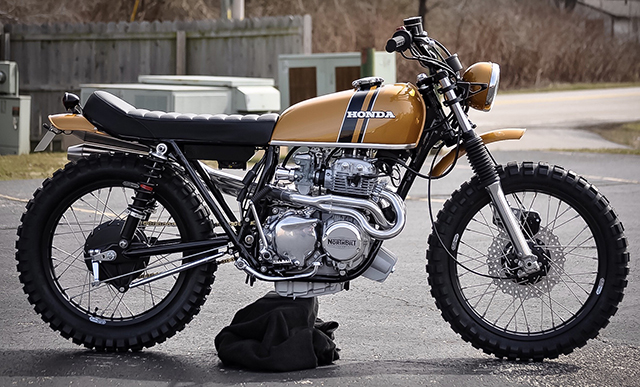