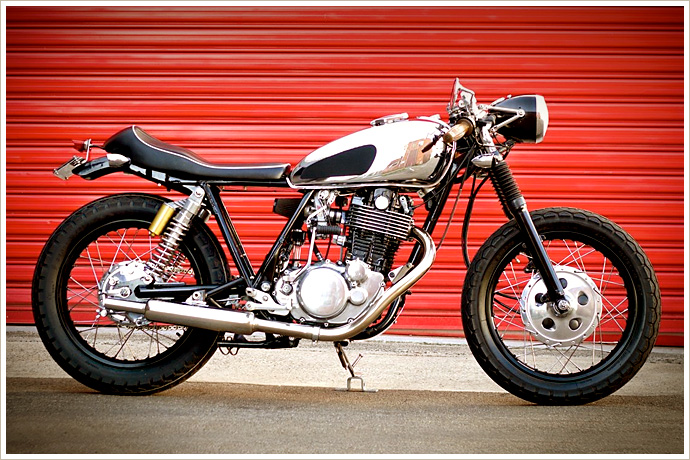 Being in a kind of retro mood, I just dug deep into the dusty recesses of my browser’s bookmarks folder. The one I was interested in tonight was the collection marked ‘motorbikes.’ See, contained in this folder are all the bookmarks I have kept from the very earliest days of my addiction, and looking back into it is akin to opening a time capsule that I buried some time in 2005. So what do you suppose the links there lead to? I’ll tell you; Yamaha SRs, and lots of them. And that’s because it’s the SR that we all must thank as the vehicle that reinvented what it meant to say the words ‘custom motorbike’ and ‘café racer,’ in the same way Nirvana reinvented ‘rock’ and Ansel Adams reinvented ‘photography.’ And what better way to illustrate my point than an SR that encapsulates everything that’s right about today’s custom bikes. Please welcome Mr Nick Blaxell and his wonderful Yamaha, ‘The Addict.’

Here’s Nick, “I’ve always had the need to get my hands dirty, whether it was respraying my BMX as a kid, or pulling the gearbox and diff from my first car. There’s something meditative about the problem-solving process involved, and I have a thirst for knowledge. My mum never let me have a motorbike as a kid, so it took me until my late 30’s, married with 2 kids, to get on two wheels with a donation from my brother-in-law; an ’82 GN250, my first bike… and I was hooked.” “I restored that non-runner and then another, and the bug bit. So when I saw my workmate’s SR400, I just knew I’d end up with one. This ’86 SR400 came as an unregistered Japanese import, and needed the usual extensive servicing; cracked tyres, dodgy bearings, but it had matching numbers and a really strong motor and gearbox. It had a few mods already; an underseat tray, battery-less kit, indicators, filter, sprocket, seat; just simple stuff, and mostly in a pretty well-used condition. But what attracted me most was the chrome tank; I’ve always had a soft spot for shiny things. So I spent a few months riding it, but as I’ve never been one to leave things alone it wasn’t long before the stock bars, headlight, gauges, carbie and exhaust had to go.” “I spent a year making changes and riding regularly with the Sydney Cafe Racers, but I knew I’d end up on a rebuild at some point. I’d built another SR with a mate in that time, so when I decided to launch Addiction Custom Motorcycles 4 months ago, with the goal of offering Sydney custom bikes on a budget, I knew it had to start with my own ride. I had the overall look, feel and performance sorted after stuffing around with different carbies and exhausts, so I set about stripping the bike back. It had 26 years of rust and corrosion on the frame, engine, and wheels, so after de-tabbing the frame and cutting off the rear sub-frame, it all went to be blasted and then painted.” “With the engine out, I sorted out years of build-up and painted everything but a few key bits and the engine side covers. If it didn’t get paint, it got polished, and I shaved the fins back on the cylinder head to break up the black. Next was to grind off the Yamaha logos on the covers, new gaskets and re-fitted the 37mm Keihin and a full stainless exhaust, also freshly polished. Painted rims, polished hubs and re-laced spokes, new wheel bearings, brake shoes, and TT100 tyres finished off the key bits.

“Living on Sydney’s beaches, motorbikes don’t last long
if you leave them out in the elements”

I’d already wired in the led lights, custom mounting them in the headlight, and the top bridge began it’s life as a die-cast WM with moulded handlebar risers and gauge tabs across the front. I hacked all that off and ground it back for a smooth cafe look with clip-ons, mirrors and vintage grips. I fabricated a stainless steel underseat tray to completely conceal the electrics and re-wired most of it while I was there. I knocked up a stainless rear fender guard, and then put the bike back together. Along the way I replaced every nut or bolt that showed any signs of rust, with 304 or 316 stainless. Living on Sydney’s beaches, motorbikes don’t last long if you leave them out in the elements.” “It may be just another SR to some, but in building this bike in 4 weeks over Christmas, and outsourcing only the sandblasting and 2 pack painting just before suppliers closed, I’m really happy with what I’ve created and learnt along the way. It’s a wicked fun bike to ride around Sydney, starts first kick, it’s loud, and it seems to grab the attention of so many people I meet. It seems I’m not the only one who likes shiny things, and that’s exactly what you want from a bike to showcase a new business, right?” “My wife calls it the Mistress, but I call it ‘The Addict’ as it’s a reflection of me; I’m pedantic, stubborn, single-minded and desperate to build again, and with two more builds already lined up, The Addict has done its job. Of course I said I wouldn’t sell it, but that’s what I’ve said about each bike so far. Many thanks to Andrew and Pipeburn for featuring my first build, and thanks also to Krys Drysdale and Ren de Haas for their work with the lens! If you like what you see, please come follow us on Facebook.”