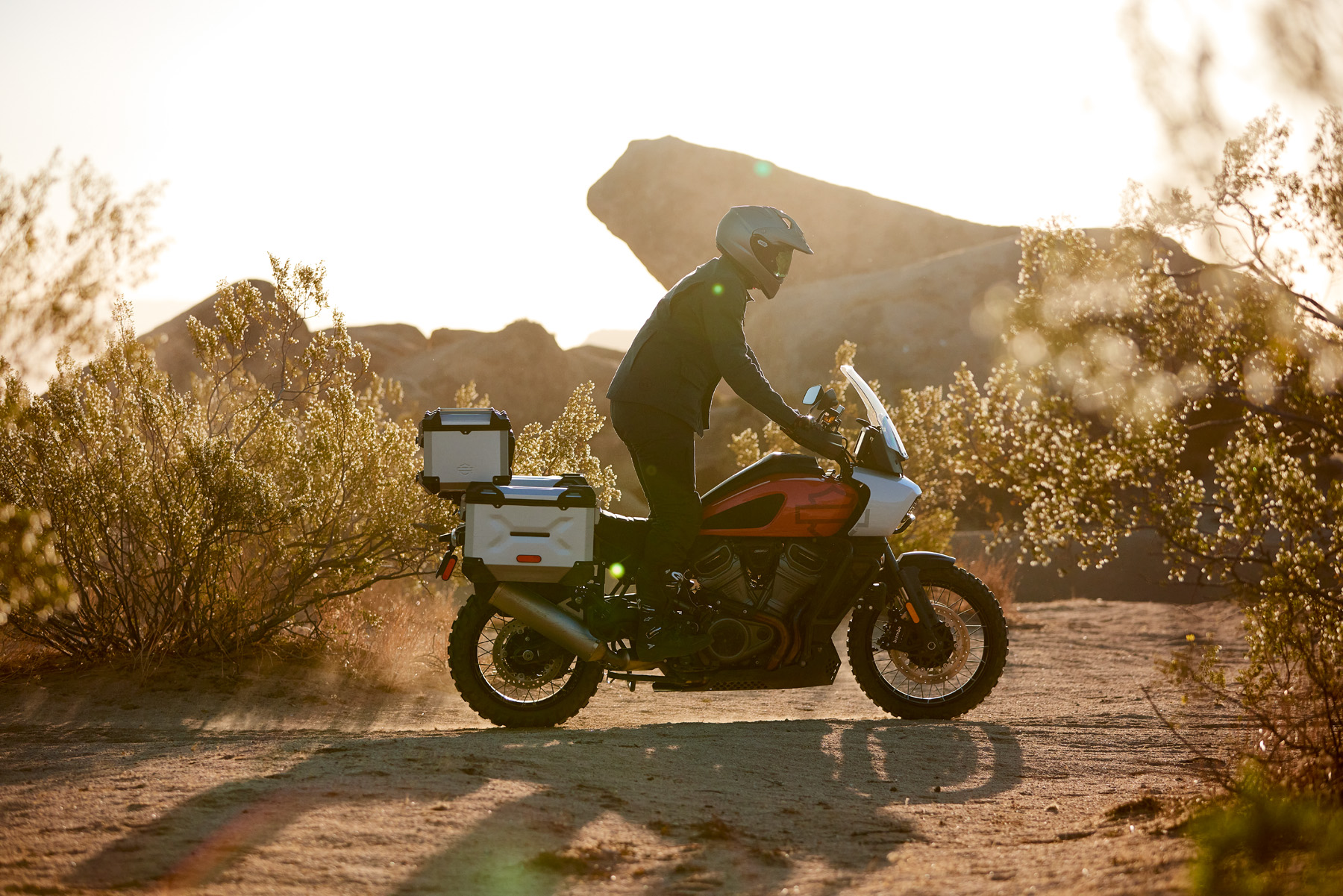 Off-road motorcycle development has always focused on pushing the limits of what’s possible in terms of reliability and performance, however, Overlanding takes this to new extremes, requiring riders to traverse markedly longer distances while being completely self-reliant, carrying everything needed for the journey, from camping equipment and rations to spare parts and tools for DIY repair. And while Overlanding had already been on the rise over the last decade alone, the need for safe, socially distanced activities brought on by the pandemic has resulted in the sport’s popularity hitting an all-time high. To celebrate the influx of interest in the space, the Motorcycle Arts Foundation has partnered with the Petersen Automotive Museum to deliver a new exhibit focusing on these long-range go-anywhere machines dubbed “ADV:Overland.”

Produced by Motorcycle Arts Foundation and Sasha Tcherevkoff and receiving support from Harley-Davidson, the all-new exhibit is curated by Paul d’Orléans (of The Vintagent fame) and features almost two-dozen Overland exploration and race rigs. In addition to a myriad of historically significant cars and trucks — such as a 1969 Honda N600 Baja racer, the Sojourner rover, and Parnelli Jones’ Baja-winning “Big Oly” 1969 Bronco — the 23 vehicles that make up the exhibit also include a diverse selection of two-wheelers, comprised of everything from primitive turn-of-the-century machines to modern-day production motorcycles.

The ADV:Overland exhibit’s pre-Depression era motorcycles include a 1903 California 1 1/2H.P. that holds the distinction of being the first-ever motor vehicle to cross the United States when George Wyman piloted the fifth-liter single from coast-to-coast in 1903. There’s also a 1912 Henderson Four and a sidecar-equipped 1915 Harley-Davidson 11-F, the former of which was the first motorcycle to be ridden around the world, completing the 18,000-mile trek in 1913, while the latter would ridden cross-country by Effie and Avis Hotchkiss in 1915, making them the first woman to cross the US via motorcycle. Additionally, the exhibit also boasts a 1906 Contal Mototri which was one of only four machines to successfully negotiate the first (canceled) Peking to Paris rally in 1907.

The exhibit also features a pair of motorcycles from the 1930s. The first of which is the 1932 Douglas H32 Mastif that Robert Edison Fulton Jr. rode the year it was built from the UK to the US — an 18-month journey documented in his 1937 book, One Man Caravan. Another historically significant two-wheeler on display at the Petersen is the 1933 Puch 250SL that holds the honor of being the first-ever Overlander to successfully make it from Europe to India. d’Orleans’ curation also includes the 1948 Indian 348 Chief that “RTW” Doug Wothke piloted around the world in 2006, as well as the custom, raked 1962 Harley-Davidson Panhead chopper that the Motosapiens.org founder built and utilized on another around-the-world attempt in 2009.

Considering the historical significance that Triumph’s scramblers and desert sleds played in the evolution of off-road motorcycles, it’s frankly unsurprising that the exhibit also features a 1966 Triumph T120 Bonneville racer that was built by Terry Prat and became the first-ever vehicle from the Hinckley firm to achieve a class win at the infamous Baja race in 2018 with Julian Heppekausen at the helm. The exhibit also includes Paul d’Orlean’s personal 1964 Honda CL72 Scrambler, which was famously featured in a Petrolicious video directed by David Martinez.

One of the main stars of the exhibit is undoubtedly the 1974 BMW R60/6 that a 23-year-old Elspeth Beard used to circumnavigate the globe in 1982. The architect and author’s ambitious and daring 35,000-mile trek — which is wonderfully captured and documented in Beard’s legitimately stellar book, Lone Rider — would make her the first woman to ride around the world on a motorcycle, inspire hosts of future riders, and ultimately earn her a prestigious place in motorcycling history. Another BMW that’s circled the globe before ending up on display at the Petersen is the 2002 BMW 1150GS A that Jason Grotte spent two years and 60,0000 miles aboard, going around the earth.

Wanting to include a two-wheeler at the top of the performance spectrum, the ADV:Overland exhibit also boasts ex Dakar and Baja competitor, Lyndon Poskitt’s 2007 KTM 690 Rally Factory Replica — a factory race machine that’s been modified to better lend itself to long-distance exploration and adventure riding.

Unsurprisingly, d’Orleans has also utilized his vast connections in the custom motorcycle world when piecing together this exhibit. Alongside the other Lost In Space vehicles on display and actual NASA moon rover,  the ADV:Overland vehicle lineup also sports a one-off interpretation of a “moon bike.” Known as the “Tardigrade,” this unique trellis-framed two-wheeler was penned by Russian designer Andrew Fabishevskiy, and constructed by Hookie Co., with the Dresden-based shop treating the NASA-branded machine to an electric powertrain with a 10kW battery and 3D-printed wheels held via single-sided swing-arms fore and aft.

After previously supporting d’Orleans when he curated the Petersen’s “Electric Revolution” exhibit, Harley-Davidson has once again lent a hand in the creation of this new exhibit, lending the Los Angeles automotive museum one of the Overland-modified Livewire bikes ridden by Ewan McGregor and Charley Boorman in the latest season of Long Way Up. The Black and Orange also fittingly bestowed the exhibit with one of its all-new Pan America 1250 adventure bikes as an example of a cutting-edge production Overland machine.

Just like with “Custom Revolution,” “Electric Revolution,” and “Silver Shotgun,” d’Orleans, Tcherevkoff, and the rest of the Motorcycle Arts Foundation have managed to deliver a world-class exhibition, shining a light on an increasingly important moto sub-culture and treating the topic to the attention and showcase it rightfully deserves.

The exhibit is now open and will run from now through March 27, 2022. Tickets are available starting from $25.