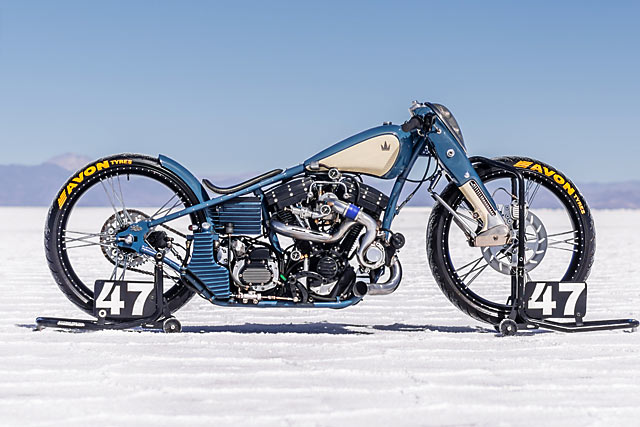 It’s easy to parrot the line ‘I don’t like Harleys’. It’s an simple trap to fall into, until you realise the huge selection of amazing customs that have been crafted out of Milwaukee’s finest. There’s cafe racers, bobbers, choppers and flat trackers aplenty but my personal favourite has to be the rarely seen board tracker style. And here’s the best goddamn one you’ll find – a stunning turbocharged Harley Evo-engined special crafted by Argentina’s Lucky Custom. Dubbed ‘The Cheetah’, this gorgeous bike is the forty-seventh build by the Córdoba-based workshop. So it’s safe to say the team there, led by Lucas Layum, know what they’re doing. They’ve produced all manner of bikes from every manufacturer and in every style you can imagine. ‘This time I wanted to do something special to celebrate the tenth anniversary of our shop,’ Lucas explains, ‘I wanted something that showed everything we’d learnt in the last ten years. The only problem was… I only had an engine.’ And that engine was torn from an old Harley Davidson Evo model. If you’re not well versed in the timeline of Harleys, the Evo engine was produced in the mid 1980’s after the dire days of AMF producing increasingly questionable Shovelheads. The Evolution engine is a very reliable and well-built unit – but it’s slower than a Miss Universe entrant. Lucas was going to change that.

[superquote]“The Evolution engine is a very reliable and well-built unit – but it’s slower than a Miss Universe entrant.”[/superquote] The engine was taken from 1340 to 1450cc’s with a new set of forged pistons upping the compression. On the outside the Evo is a heavy-looking looking donk that isn’t well suited to a slimline board tracker, so Lucky Custom trimmed back the engine fins to have the barrels looking more sleek. But with plans for a turbo afoot the heat needed to be dissipated somehow, so an oil cooler was added. Then eyes turned to the frame. The entire tube steel frame was designed and fabricated in-house. But what really makes the whole thing pop is the art-deco inspired front forks. They’re pinched from a diminutive 1960’s Honda Dream scoot – which would have been a Honda Nightmare for the pair but they’ve been beefed up to take the extra heft of the engine, and widened to take the massive front wheel. Both ends are a whopping 23 inches in diameter and run an unusual star spoke pattern. Up top the fuel tank is in two sections and connected through a series of hoses. Inside one a fuel pump is mounted, making sure the Cheetah sucks in enough gas to feed the turbo. The oil tank, battery box and all the finned covers you see carefully placed around the bike are all built from scratch in the shop. Everything was coming together for the team. But with all that assembled the guys at Lucky Custom felt the bike was missing something. ‘We needed something to bring the look of the whole bike together,’ Lucas says, ‘It was really difficult until I found a headlight from a 1940 model Ford that set it off perfectly.’ The Ford theme continues with the colour – the blue is a shade from the same time period, matched to some white and gold with a fine fleck throughout. The end result is amazing blend of board tracker, 1920’s decadence and a smattering of 1950’s hot rod thrown in for good measure. And with that turbo, the thing will scream harder than an exocet missile. Lucas is especially proud of this build, for a simpler reason than you’d expect. Unusually for a workshop in such high demand – he gets to keep this one.

[superquote]“And with that turbo, the thing will scream harder than an exocet missile.”[/superquote] ‘What I like most about this bike the most is that it’s staying mine!’ he laughs. And it should, with the bike being the end result of months of careful consideration and hard labour and the culmination of ten years of work. ‘Every part of it took imagination and lots of time to fabricate. And what you can’t see in the photos is how it handles. I absolutely love it!’