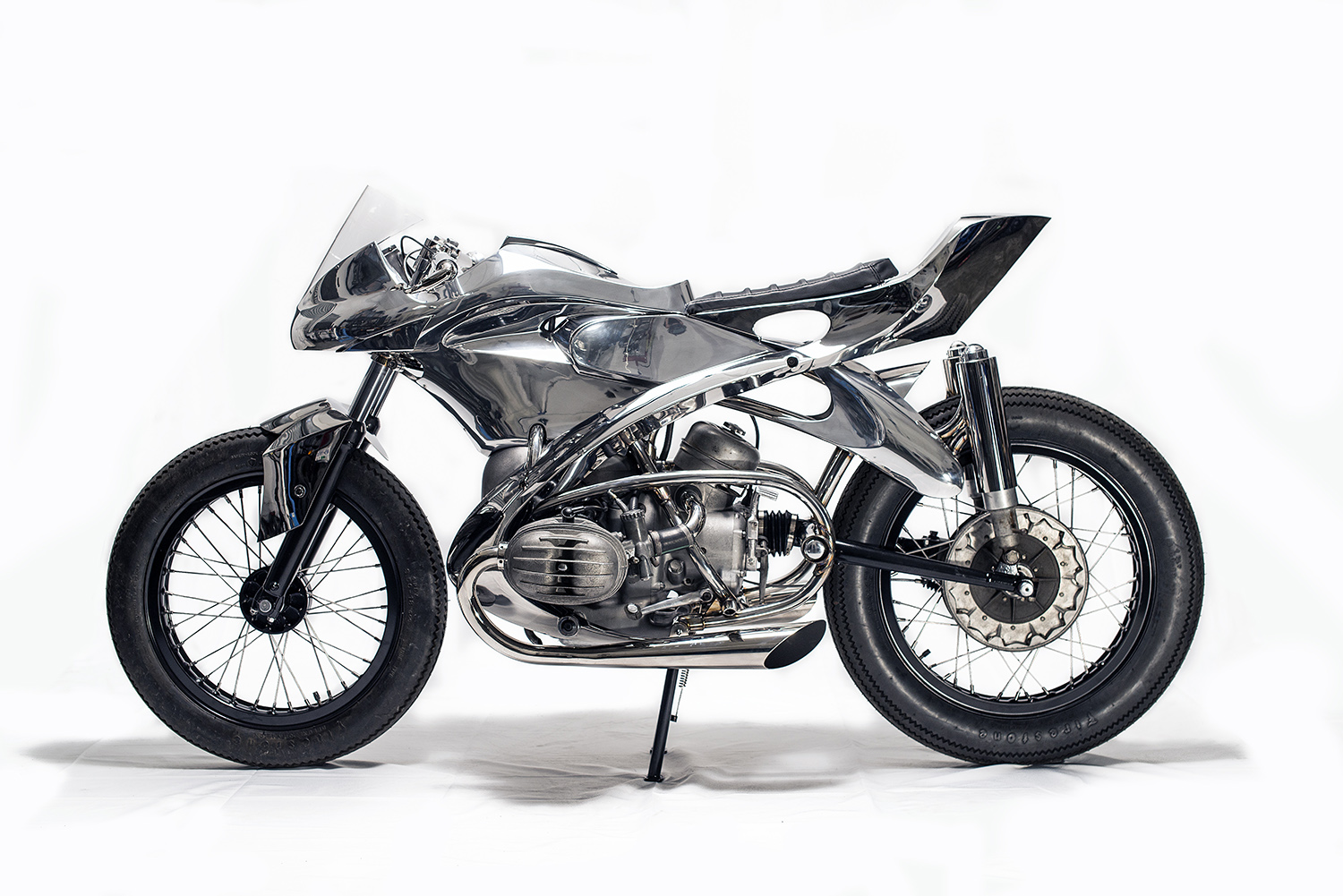 The modern superbike is the ultimate incarnation of each motorcycle company’s abilities and talents; they’re the flagship, the bike in their ads, their most expensive product, the one designed for you to lust after. But truth be told they basically all look the same and the days of radically unique machines on showroom floors are long gone. So to fill that void where mechanical machine meets metal art, a new generation of designers and builders have stepped forward to push the boundaries to the limit. One of the scene’s most talented is Canadian Jay Donovan, and his latest build ‘Amadeus’ explores the possibility of what a period-manufactured concept bike might have been and will no doubt get tongues wagging, as any good piece of art should.

The build is the third and final instalment of Jay’s bikes for the Haas Moto Museum in Dallas, Texas. Their founder and curator Bobby Haas, one of the world’s true renaissance men, has built not only a stunning facility filled with the most incredible two-wheeled machines you’re ever likely to see in one place. But in doing so has become the Patron Saint of the custom motorcycle world, providing the backing and support to enable the scenes’ most talented artists, designers, and builders a chance to push the envelope to the very edge.

“When Bobby reached out to discuss the idea of a third build to complete the series, I was just starting to break through into the concept with some more detail,” Jay explains. “As in the last build, the design itself still plays with flowing dramatic curves. The idea with this build was to maintain the drama, but make it feel more balanced,” he continues. “The initial concept for this build came about while working on the latter half of Stingray. It started out on paper as a few rough profile sketches, trying to work out the design and general proportions. Along the way, I became curious with how a more subjective sculpture could be better integrated within what would be considered the traditional design of a motorcycle.”

The basis for the build is the powerplant from a 1963 BMW 60/2, an incredible visual design in its own right and one that has appeared in books like ‘Two Wheels to Adventure’ and the legendary ‘Zen and the Art of Motorcycle Maintenance’. It was this that gave Jay his original components from which to work outward. “The rear suspension kept in a traditional fixture style and position, and the engine itself. Specifically, the 3 main mounting points (two on the bottom and one on top). Having designed the body first, its flowing lines became the blueprint and constraints to work within for the design of a stainless-steel trellis frame.”

So, while the frame was secondary, unlike its usual role as being the foundation of a motorcycle design, it still holds an important place in the build. Anchoring the engine both literally and figuratively, with its few exposed lines giving a strength to ground the rest of the build. “The body of the bike can be divided into two main sections. There is the main upsweeping section leading from the rear shock towers to the front of the fairing. A more traditional Bobber style, lifting line, made from Aluminum. And there is the more aggressive, downward moving seat and lower cowl section which crosses it. This section, as well as the front fender are made from stainless steel.”

“The integrated sculptural aspect of the design, (residing where a traditional gas tank would be located), consists of three main protrusions. One extending upward, the other two extending laterally out in front of each knee indent. The concave openings receding towards a central sphere residing within the body. It is designed to be seen from atop its mirrored platform in the Haas Museum and to catch and refract light back upon its environment. An attempt at creating an additional bit of beauty to the visual experience while introducing more metaphor into the concept.”

In the process, Jay came up with a way to express every different motorcycle through some basic geometry. A tool to be used to inspect a design and give a snapshot of its overall feel and balance. “The idea with this method is to use a “Background Triangle” which encloses the entirety of the machine. And a “Foreground Triangle” based on what your eye catches first within the design, (what would be considered the foreground). You then end up with two overlapping triangles which provide a general feel for the machine as well as intersection points to inspect. Additionally, you can circle the inside of each triangle, to give you an added layer of interactions to inspect.”

What ‘Amadeus’ then delivers is not only a complete motorcycle, one that will sit resplendent in the Haas Moto Museum. But also acts as a teaching tool for any motorcycle designer or builder in the same way that great art and music have inspired its participants for generations. The idea is not to copy, not try and recreate, but to learn, be inspired, and find new ways to push yourself in your own endeavors. For those who would like to learn more, Jay will be talking about his process in more detail on the Instagram and YouTube page “Moto Reflections”. For now, I’m going to drink in his build and then try his tool on my own bikes and just see where it takes me.