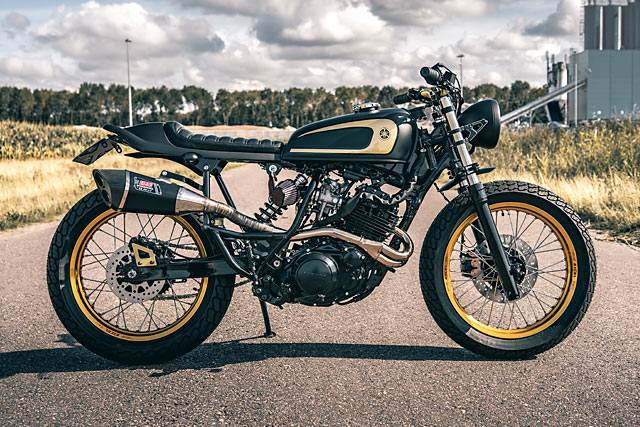 Motorcycles seem to be the vehicle du jour in Hollywood of late. Whether it’s Mission Impossible, Bourne or Bond, there’s bound to be some cool moto action sequence spread all across their trailers. And without fail, the evil assassins will be the ones riding black bikes, all dressed in black and taking potshots at the lead actor’s beautiful face. Similarly, Dutch customisers Ironwood have also made their latest production all about a hitman, except this one isn’t on a bike. It is the bike. Meet ‘The Sicario’ tracker. 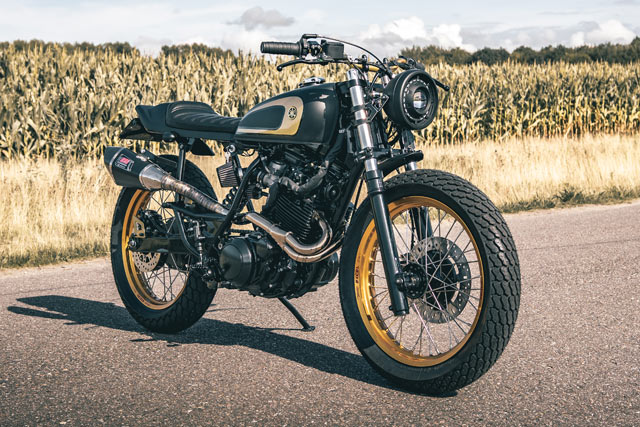 “Our ethos is to try to be both bold and minimalistic at the same time,” says Ironwood’s head honcho, the enigmatically named Arjan van den Boom who founded the shop in 2012. Located due East of Amsterdam, across the IJmeer lake, they are quick to confess a serious moto addiction. Never mind the style, type or kind; if it has two wheels and goes ‘braaap’, the Ironwood boys will be into them. 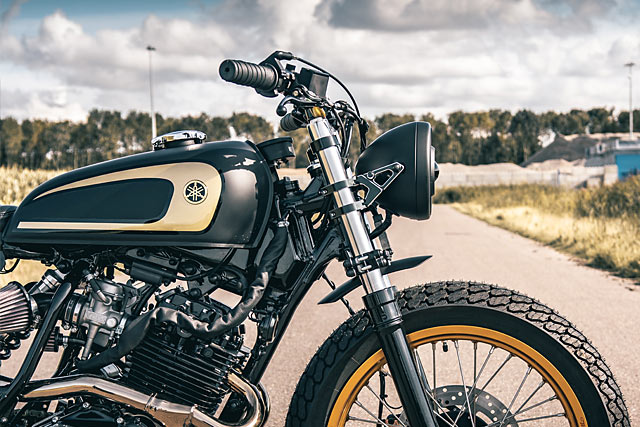 For this particular build, they probably had to rein in their obsession just a little, as the decision was made to go the tracker route. Specifically, a street tracker. Found all dusty and lonesome in a friend’s barn, the ‘92 Yamaha XT600 was rescued, cleaned and promptly tagged ‘destined for great things’ by Arjan and the team. 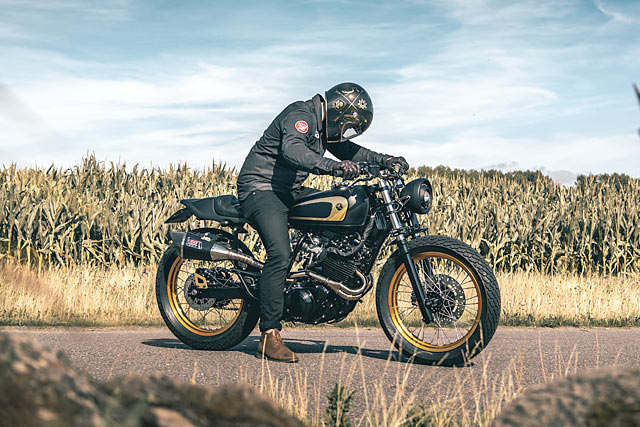 Following through with the inherent contrasts of their ethos, they took a similarly contrarian approach with the XT. “We wanted to make a petite bike with a big attitude; on the one hand sheepish and on the other courageous.” Seeing the embodiment of this as a matt black finish with golden highlights, they pressed the ‘go’ button on the build itself.

[superquote]“We wanted to make a petite bike with a big attitude; on the one hand sheepish and on the other courageous.”[/superquote] 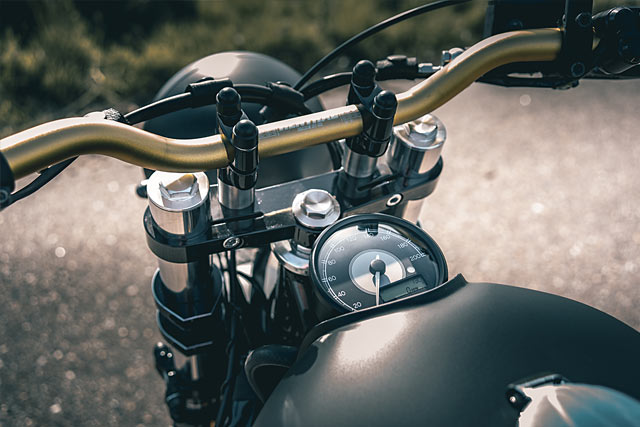 “The XT came from the factory with an iconic off-road look; after much thinking, I envisioned it being converted into a street flat tracker. So after a full tear down and engine revision, we significantly changed the dry sump frame on the back. Initially this was to fit a seat, but later this was revised to accommodate a full tracker tail with leather on top.” 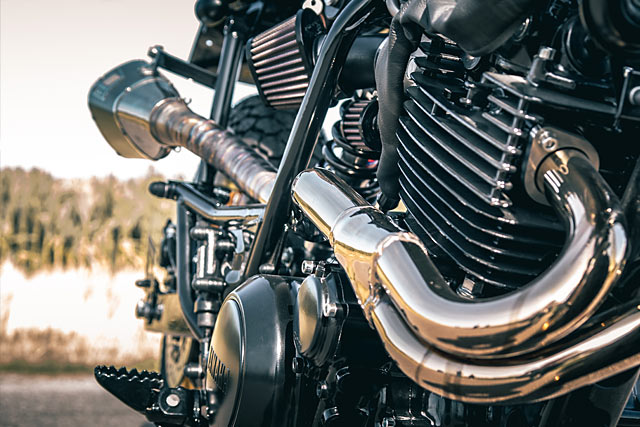 Looking outside of the XT’s immediate family, Mr Boom chose the always popular Honda CB360 tank to mount on the tracker, but not before it was slimmed down to present a more nifty, versatile and fun form. Next came the bike’s plumbing. While the exhaust gases travel through plenty of bespoke parts before it’s finally free, the final stretch is managed by a pretty sweet-looking Yoshimura can with a jaunty, upswept look. And needless to say, Arjan went for a Motogadget M-Unit to power the whole she bang and manage the bike’s LED lights, too. 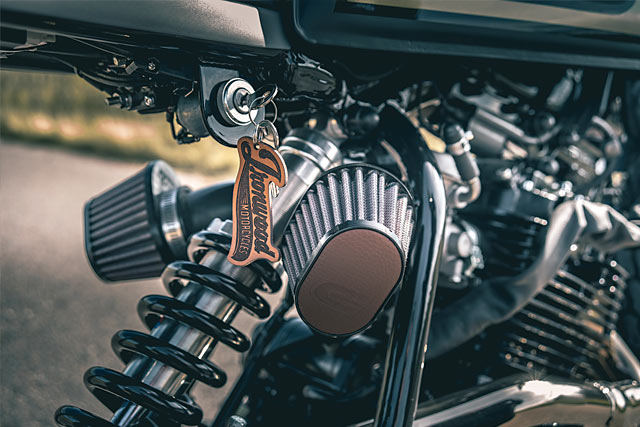 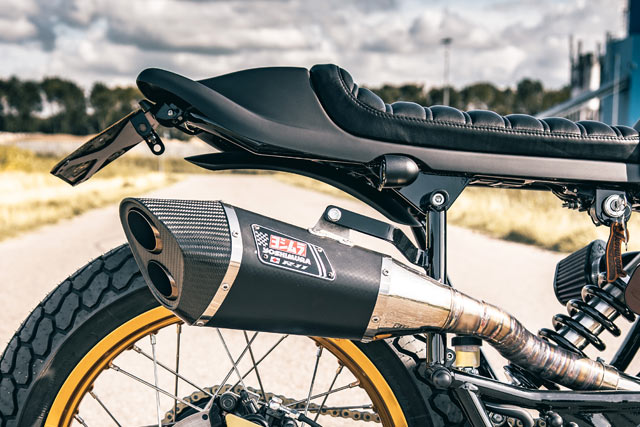 But it wasn’t a clean a kill as you might suspect. “Getting the right stance was quite challenging, as the original bike was high at the front, with a 21 inch front wheel and a 17 on the rear.” But ultimately, an epic stance was achieved by lowering the front fork, swapping the wheels to Excel 19s at both ends, adding a new Hagon rear shock and making a few choice mods to the rear frame. 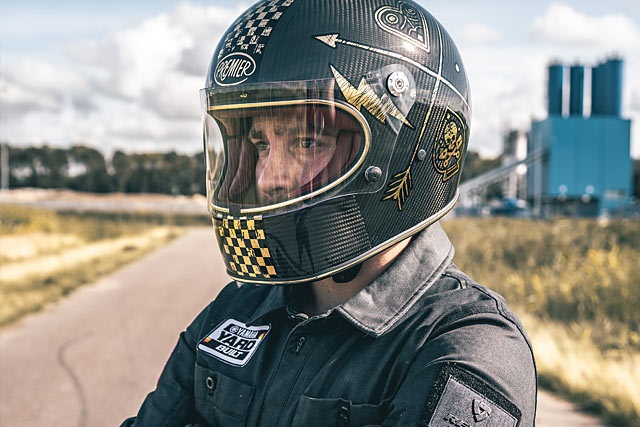 Mr Boom glows when we ask him about his favourite part of his Asian assassin. “Personally, it has to be the Yamaha’s exhaust. Yes, you’ll either love it or you’ll hate it. And yes, it’s in your face and very big – but that’s what I like about it.” For Arjan, custom decisions should be based on gut instincts. “It’s genetics – the essence of changing the look and feel of a bike according to your own desires.” There’s no accounting for taste, but in this particular case you can send the accountant home. This rocks. 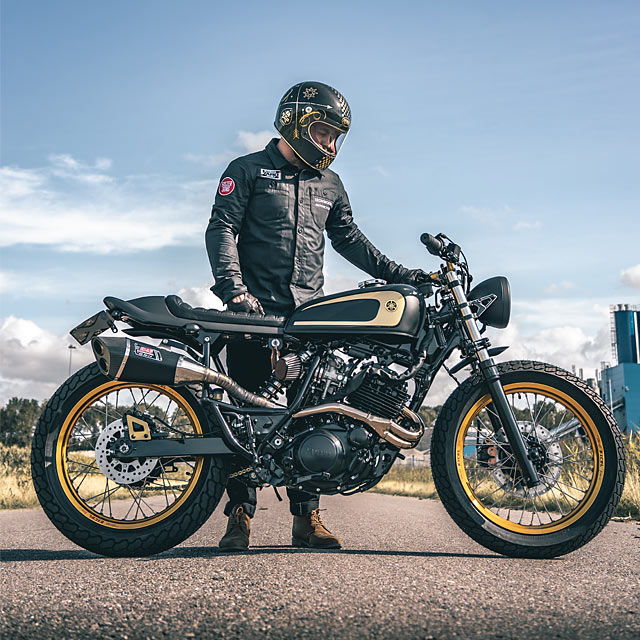