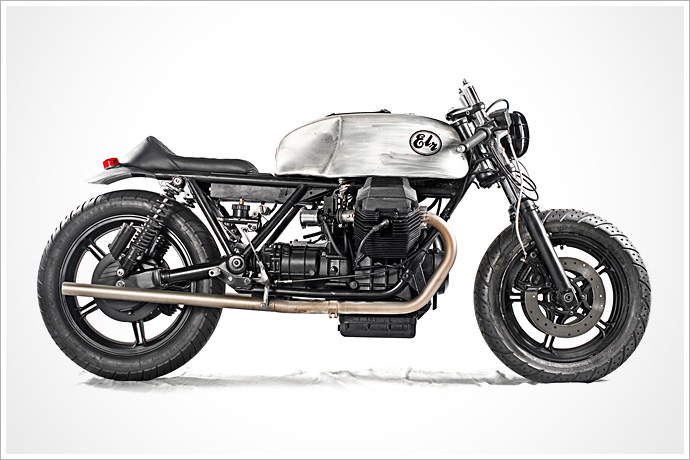 It’s been quite a while between drinks for Milan’s rather talented Marco and Phonz and their shop, Anvil Motociclette Costruttori. We featured them in an interview in April of 2011 and they teased us with some whispered, golden words concerning the next few projects they were undertaking. One of those was a slight departure from their Nihon-centric portfolio, a nice big Moto Guzzi. Excited, we made them promise to give us first dibs on the bike once it was finished, and low and behold, here she is. Meet the creama de la creama (see what I did there?) of Italian custom bikes, the “Mille ELR”. Flat front tire or photoshop faux par? You be the judge

The boys came across the stock donor bike while on a Corscian road trip. They got talking to the owner on the Ferry back home and eventually he revealed that he was looking to sell it. “It was obviously an overweight touring bike but those engines pull like nothing else and their road holding is up to modern naked standards.” By a stroke of luck they had a customer from Parma that had been talking to them about an Anvil-made Guzzi, so fate took over, the bike was purchased, and the project begun. The bike has been handled in the signature Anvil style, with a strong attention to the removal of the superfluous and a focus on the minimal with an abundance of black and silver tones. The bike was completely rebuilt from the ground up with new shocks, seat and a tank – in this case a Norton Aluminium number. They also worked their magic on the frame, bars, pegs and the headlight, too. The engine remains standard with the exception of the epic pipes and intake trumpets and mesh. Hey – why try and gild a lily? As with all the other mods, these were hand built by Marco and Phonz in-house. The end result is a very clean look with a few small-but-beautifully-conceived details that really make the bike sing. As with previous Anvil bikes, the Guzzi was lowered dramatically to achieve the desired stance by cutting the forks and raising a good chunk of the remaining tubage above the top triple. Call me quaint, but I’ve always loved that look – simultaneously sleek, low, and a little dangerous. God help anyone (and their gonads) who takes a trip over those bars… In our previous Anvil post, the guys were adamant that Anvil wasn’t a shop focused on shows. “Our philosophy is not to build bikes for the shows. First of all we build them for passion, for us and for our clients. But if, in the future, there will be the opportunity to enter some bike in a show, we think we are competitive enough to do it. The ANVILS would be quite different from the other bikes competing.” And it seems as if that particular thought has paid off for them. They entered the Guzzi in the 2012 Italian Kustom Kulture show at Cesena “for fun” and managed to pick up a first place in the “Metric” (or, as we like to call it, the “Bikes that aren’t Metallic Lime Green Harley Choppers”) class. Nice work! All up, we’re more than a little excited to see what these long-haired Italian country boys come up with next. Word on the street is that they are currently working on a Honda CBX 1000. Sweet lord, can you just imagine?