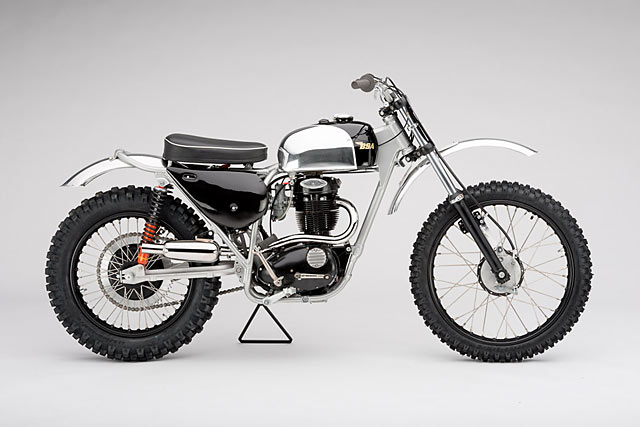 There was a time when British bikes of the ’60s could be had at a wrecking yard for chump change and the old scallywag behind the cash register was happy to see them go. But those days are over, as all that is old and oily is somehow new again with a steep price tag to match. The task is even more difficult when the object of your desire is a rare factory racer and crashing it first time out at turn two could be the most expensive ten seconds of your life. So Steve Bright from Washington State, USA, has done the smartest thing a man in his position could do. Taken a 1967 BSA B441 Victor Enduro and turned it into a factory works replica racer that wouldn’t have looked out of place in the privateer’s paddock of the day. Our man from Spokane has been riding bikes since he was five years old and in his early adult years started to wrench on them too. By day he’s designing equipment for a drilling company but he also runs his own motorcycle shop that is strictly “by appointment only”. Here you’ll find him working on all things air-cooled with enough tools and know how to offer machining services like rebores and cylinder head servicing. But it’s his combined love of BSA motorcycles, having previously owned a Victor GP, and vintage motocross that kick-started this build. Steve recalls, “I had always loved the BSA factory 494cc works bikes with the titanium frames, magnesium engine cases and other super trick parts, so I decided to build something that looks the part but isn’t so rare that you can’t actually race it.” This particular matching numbers ’67 Victor Enduro he found locally and it was already equipped with some high end racing parts, even better it came with a 1970 model as a spares bike. “I didn’t have a specific bike I was trying to recreate; I was just pulling what I thought were the best points from many of the machines that were raced by Jeff Smith and others during the mid to late 60’s from the BSA race team.” The bike was completely stripped down and the frame the first thing to receive some love, powder-coated metallic silver to give it the look of the works titanium frame. The new plastic oval number plate is attached with a set of custom alloy supports and sets the theme of the bike in the black factory colour scheme. To match the later model machines the gorgeous front fender is attached high up with a Preston Petty fender bracket. While the rear unit catching all the mud and debris is a new alloy item from Matt Hilgenberg at speedandsport.com. The side plates are new reproduction pieces from bsaunitsingles.com that need custom brackets but save the search for the rare original items.> The tank might be the stock BSA aluminium piece but the one in Steve’s possession had all but been destroyed with dents on both sides and the rear. But this just allowed him to show off his prodigious metal working skills restoring it back to a brilliant finish. The first task was to cut the tunnel out so he could metal work each section back into shape. Then with it welded back together he polished it up and sprayed it with PPG paint and gave it gold BSA decals. The execution is flawless; this is a no body filler job and looks incredible from every angle. To match Steve sourced a C15 Trials seat made by Wassell that was a period correct modification for many racers of the time. But if you’re going to go racing the suspension has to be spot on and Steve once again hit it out of the park. Up front the forks are Ceriani 35mm MX items, rebuilt and painted just like those used by Vic Eastwood. But it’s out back that things get serious as Steve happily explains, “the swingarm is quite a rare original A&A aluminium unit. These A&A swing arms are the only aluminium units allowed in this machine’s class in AHRMA racing. But it didn’t come to him in the best of condition with even the shop’s 100 ton press not able to budge the bushings or pivot axle. Having to eventually destroy them to get them out Steve machined new items to finally get the swingarm mated perfectly to the frame. It’s hung by a set of 13.25” Boge Mulholland rear shocks, the combination might not be the same as the works bikes but it sure gets the job done. Another small compromise had to be made on the wheels, the factory 20 inch front makes tyres hard to find. So Steve laced a 21 inch unit up with stainless Buchanan’s spokes to a 1972 Husqvarna 250CR hub. The rear is an original BSA quick change hub using an 18 inch rim again with Buchanan’s spokes and like the front end powder-coated black to match the works colours. The engine needed plenty of graft to get it up to spec but it’s yet another area in which Steve excels, setup to do all of his own machining work. Damaged and with broken fins on the stock items he replaced the cylinder and the head. Internally it’s been honed and swings a .040” over piston with new rings while the head has newly ground valve seats and a fresh set of valves. There is an alloy rocker feed manifold from Peter Quick, a new set of gaskets throughout and then Steve gave it a coat of GM satin black engine paint. The outside is no less impressive with Steve going the extra mile to make sure the engine is a reliable racer. The ignition is battery-less, a Lucas energy transfer with a modern Japanese style coil, new points and condenser. “The factory machine would have come with an AMAL Monobloc, but I saw many works bikes with concentrics or AMAL GP carbs, so for somewhat originality and ease of use at the races, I went with the concentric AMAL 930,” explains Steve. Finishing the whole thing off and giving a barking great sound is the new chromed exhaust also from Peter Quick. The new Renthal vintage/desert bend bars are the perfect fit and only wear the bare basics to get the job done. AMAL type levers get the tick of approval and a full set of new cables makes sure everything operates as it should. The pegs are just like the works bikes, folding with bear-trap style cleats welded on that have been zinc plated by Novation Inc. All of which is further proof that this BSA might host a little bling in the looks department but it’s been re-born to go fast with the best parts for the job. It’s that perfect mix of purity and power that has people young and old stopping Steve for a look or standing and admiring for hours when it’s parked up in the shop. “I could easily display this bike but I’d rather see someone racing it.” Now that’s a sentiment we can drink to.