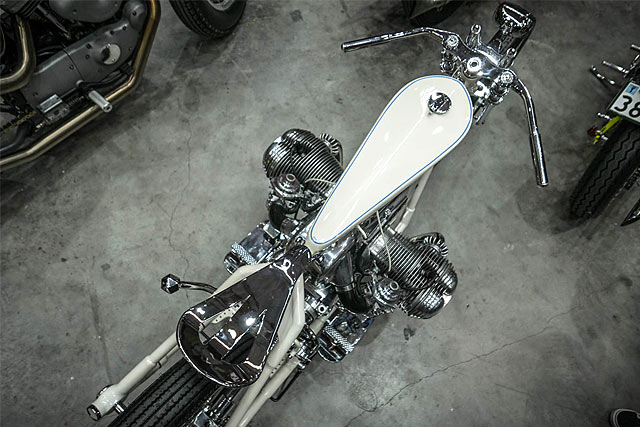 For much of my time in Malaysia I looked like a German sex tourist. My bags had been lost in El Salvador on the trip over, so, smelling quite ripe after 36 hours in the air, I’d bought the first shirt I’d seen. It was pink and floral and not really the kind of thing you want to wear to a show like the Art of Speed. Or at all, really.

But I was stuck with it. And it was worth looking like an absolute cretin to see the amazing machines on show in Kuala Lumpur. The Art of Speed is a relatively new event, one that’s expanded from a side note in a shopping centre to an all-consuming, all-singing and all-dancing display of everything custom in Malaysia.

It’s now two enormous halls filled with cars, art, apparel, stalls from all the major motorcycle manufacturers and most importantly, a whole bunch of custom motorcycles. The place was heaving, with tens of thousands of people dropping in over two days. The outside carpark overflowed with motorcycles of every vintage and description. More disturbingly, a nearby food hall offered nothing but Durian-based food stuffs. The less said about that the better. 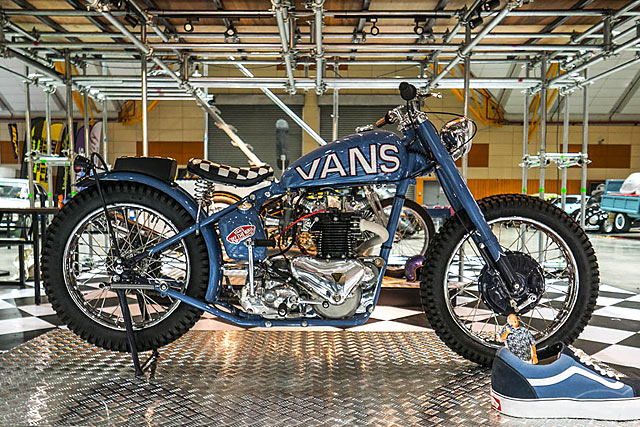 But what I can ramble at length about is the motorcycle scene in Malaysia. It’s not like many of its neighbours in South East Asia. Motorcycles are used as everyday transport by many, but there’s still huge amounts of cars on the road. The traffic is relatively sensible and you won’t see, say, thirty people and a goat on a step-through like you will in Thailand.

So while there’s plenty of motorbikes being used as runabouts there’s also a huge amount of big bore Triumphs, Harley-Davidsons, Hondas and everything else you can imagine. The long-distance adventure scene is also pretty big. I met a number of owners with 200k + on their R1200Tigerenerestradas, who travel to Vietnam, Laos, China, India and Southern Russia in their time off work.

Even though I’ve got no idea how they deal with the heat.

THE ART OF SPEED

Malaysia is cursed with oppressive humidity. So stepping into the air-conditioned hall for Art of Speed was worth it just so I don’t end up becoming a puddle on the footpath outside. Staggering into the show might be stepping into a heaving mass of people, but man that air conditioning feels good.

The show itself was crossed by trade booths, huge displays for brands like Triumph and Ducati, apparel sellers and a smattering of an international crowd from the United States, Japan and Australia. In amongst it all is yours truly, walking around and drinking beer I’ve pilfered from the American delegation, trying to pick my way through the crowd and not stand too close to any kids. 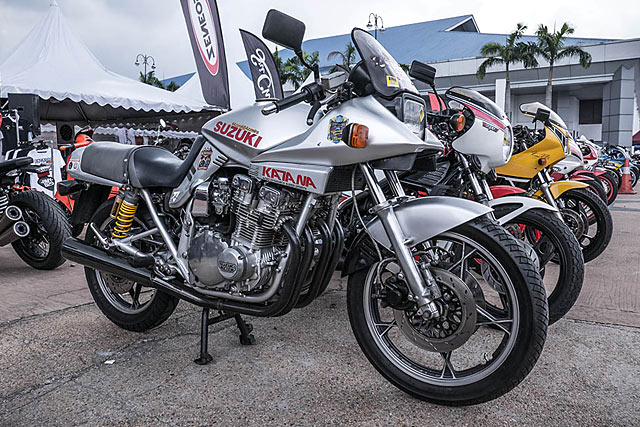 Perhaps the most amazing sight was the Hot Wheels booth. I had no idea that the little diecast models would act like catnip for the locals. A huge crowd of people crammed their stall for the entirety of the event as people waited in line to buy some sort of limited edition car. Despite plenty of time spent sitting at a booth I’ve no idea what it was a model of. The crowd was twenty deep and I couldn’t even see the signage.

Not really into the model car thing, I spent much of my time wandering around and looking at the motorcycles on display. 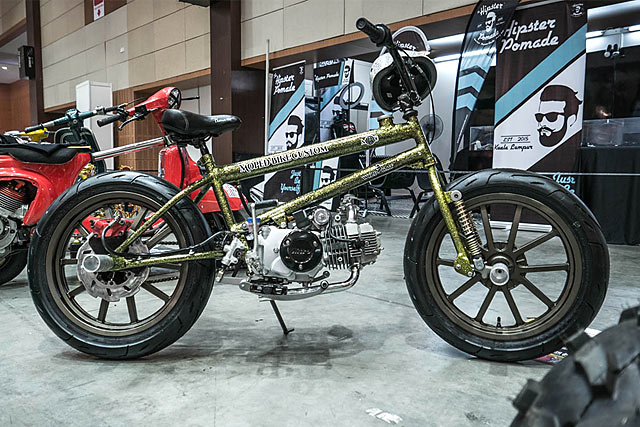 It’s rare to see the cross-section of motorcycles that I saw in Malaysia. The custom scene takes in every style of motorcycle you can imagine. There were cafe racers, trackers, scramblers, bobbers and choppers. Mad Max apocalyptica and beautifully polished restomods. But some of the greatest bikes on display were way more bombastic than anything I’ve seen in a while.

[superquote]“Later the next day the owner revved the hell out of it as a crowd gathered and I ran to save what little’s left of my hearing.”[/superquote]

One was as a chopper that sat groaning under the weight of it’s engine – a huge donk that looked like it was taken from a Nissan Skyline. Later the next day the owner revved the hell out of it as a crowd gathered and I ran to save what little’s left of my hearing. 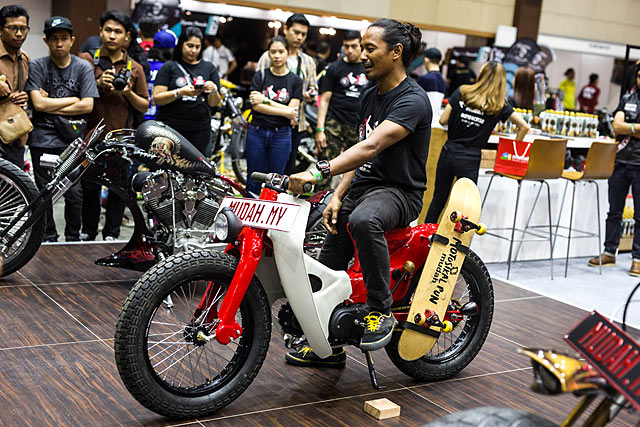 There was some impressive Honda Cubs on display, chief of which was the XR600-powered beastie that graced these pages not long ago. There was an incredible BMW bobber (also featured!) and a Akira-style scratch built motorcycle made by Kenstomoto, a coach builder who makes knockout motorcycles in his spare time. We sat outside for a while, flicking through his photo collection and ogling at the incredible amount of work he put into his latest creation.

The second day had me back at the show, still wandering around, still asking stupid questions of bike builders and watching the music on stage. I don’t know if you’ve ever seen a ten piece Malaysian funk band but Christ, one of the groups playing for the dancing crowd was one of the tightest bands I’ve seen in years. I pilfered more beers, meandered around the carpark (always the next-best-thing at any good show) and bought some cigarettes off a girl with a neck-mounted tray like something from Mad Men.

I was absolutely exhausted. The show is the best kind of sensory overload, with constant distractions like Japan’s Mooneyes, the sounds of a motorcycles barking into life or some other motorcycling oddity I’ve stumbled across in a corner. But I was also exhausted because I’d spent all night at the airport, on a python-esque search for my lost luggage, culminating in an argument with a very aggressive Malaysian airport version of the soup nazi.

It shouldn’t surprise me that an airline that can lose an entire aircraft can lose a bag. But the next day at the show had me in high spirits again – I had a chance to speak to some of the builders and take a look at some of the wild bikes being shown. Two of them have been run on Pipeburn already and both could be slated for bike of the year. One is a gorgeous Boxer bobber by Rusty Factory and the other a mental Honda Cub with a XR600 engine bolted on. But you’ve seen them and should have them as your wallpaper. Here’s one you haven’t. 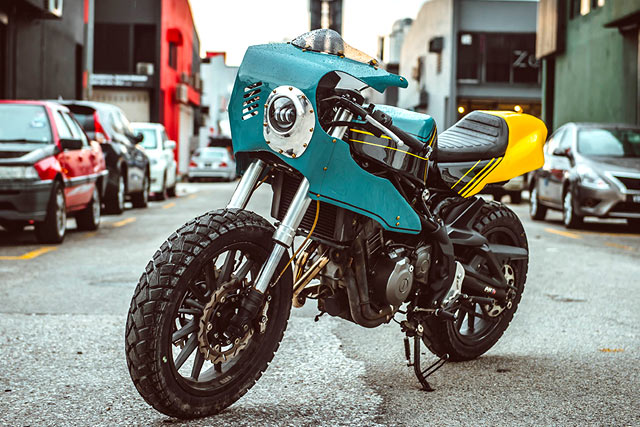 In a possible first, here’s a new Benelli TNT 300 that’s been customised by Beautiful Machines, wheeled outside and photographed in the cold hard light of day. The best thing about this build is that it’s designed to be a kit – all the parts can be replicated and are bolt ons. Pretty clever, eh?

With a few more beers down at the end of the day more awards were given, thank you’s issued on stage and a Japanese rockabilly band who had coordinated hair-combing moves took to the stage to round off the event. The crowd – possibly the best behaved group of people I’ve ever seen – made their way out of the hall and into the hot Malaysian evening. 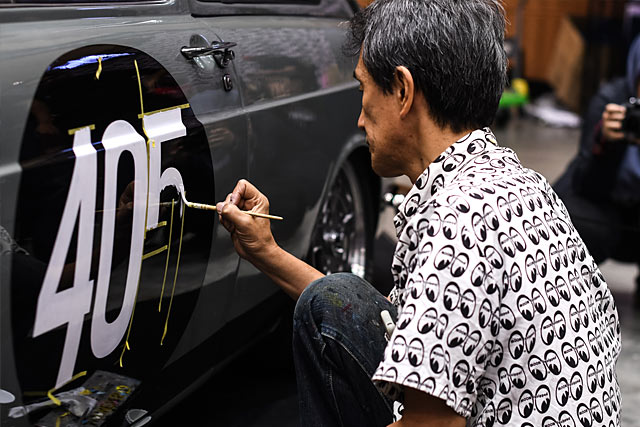 Since its inception the Art of Speed Malaysia has been going from strength to strength. This year’s was even bigger than the huge 2017 event and it’s looking like 2019 is shaping up to be an absolute belter. We’ll be back next year and can’t want to see the insanity they have in store for us. And if I’m lucky enough to be invited I promise I’ll wear a different shirt. 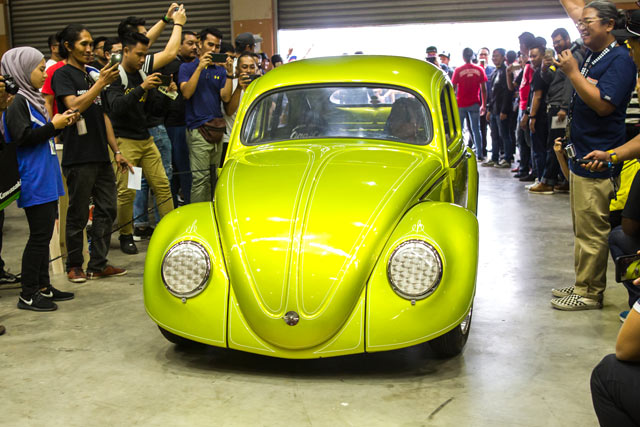