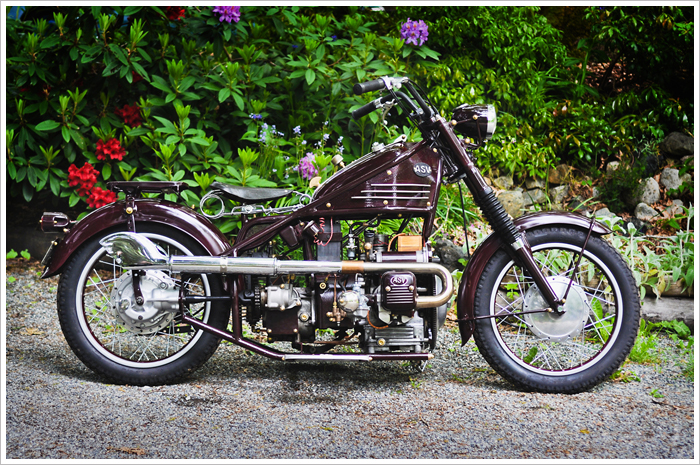 One offhand comment about Canadian bike customising has brought some rather passionate Canadians out, resulting in a raft of emails from Canadians wanting to show off their custom creations. Among these emails was the ASV, the Allan Special Vehicle, a custom bobber style bike built by Joe Allan, who wants to show just how much customising a Canadian is able to fit into one build. And what a radical, built from the ground up bike it is.

The build began when Joe picked up a Cushman Truckster from a surplus auction at his work, for the princely sum of $85. For those not aware of what a Cushman Truckster is, it is an industrial motorised cart, with a semi enclosed cab. Hardly the sort of thing one would consider when starting out on a build, however Joe could see potential in the air cooled opposed twin motor and three speed gearbox. After stripping the Cushman of it’s driveline, Joe fitted late model Kawasaki quad running gear to the Cushman, and put the factory running gear away for use at a later date. This later date arrived when the Joe’s local bike shop sponsored a Biker Build, with the rules stating a $5000 limit on the build – including purchase of the bike. Joe was already in front, having a set of running gear and numerous items he could use in the build, squirrelled away at his workshop. Knowing he wanted a 30s/40s look for the bike, and the material required to begin, Joe started on the build. Using a Suzuki 650 Tempter steering neck as the starting point for the frame, Joe bent up some scrapyard steel to make the frame around the motor. Running a driveline turned out to be a bit of a mission, as the Cushman transmission had the output in the centre at the rear of the case, right where the rear wheel is. This was remedied by putting a sprocket on the output shaft, a short chain running to a V65 Magna driveshaft output, along a hybrid Magna V65/Honda Shadow driveshaft to a Honda Silverwing rear drive hub. Although the Silverwing hub and wheel worked well, the Comstar rim didn’t fit in with the flavour of the build, so Joe knocked out the Comstar spokes out and machined the hub down to take a 1970’s Honda CB750 rim. After welding up the arrangement together, Joe’s son laced up a 1972 CB750 and the driveline was finished. A foot clutch has been fashioned from a part on a Chevolet pickup, mounted above 70s aftermarket footboards. The Cushman motor is rated at a factory 18hp, the single bendix carburettor being replaced by a set from a chinese dirtbike, the oil cooler pilfered from an industrial compressor. A Kobuta tractor alternator is the electricity supply, driven by a pulley off the drive stub, running power to the battery, and to the wooden coil box, picked up from a thrift shop for $1. Also thrift shop sourced are the air cleaner housings, fashioned from old silver plated wine goblets. The exhaust is a Joe Allan special, two stainless j-pieces, matched with reproduction Harley silencers. Aesthetically, the bike aims to look period specific, Joe going so far as to paint it Bordeaux red – a 1949 Volkswagen paint code. The front forks and rim are from a Suzuki 250 Hustler, front and rear fenders courtesy of a Suzuki T500. Special touches have been applied all over the bike, enough to notice something different everytime you look. The oil and grease lines are all copper tubing, the front and rear brake levers both mounted on the hand controls. Joe has fashioned the tail light from a 1970s aftermarket tachometer housing, fitted with a Honda cut down brake light lens. For seating purposes, a reproduction Penny Farthing Bicycle seat has been used, showing the variety of influences and sources Joe has access to. The ultimate personalising touch is definitely the ASV logos, cast from 50/50 solder and fitted all over the bike – surely making people hit google to find out what sort of bike it is. Starting from just an engine and transmission, this bike has grown into the unique creation you see today. Although it’s style may not be to everyone’s taste, you have to admit that Joe is one hell of a visionary, to see that Cushman Truckster and know he could do something amazing with it. If this is the sort of bike ingenuity Canadians can come up, then I’m not sorry I questioned their custom culture – as we’d never have featured this one of a kind motorcycle.

Check out more photos of the ASV, including many build pics here.