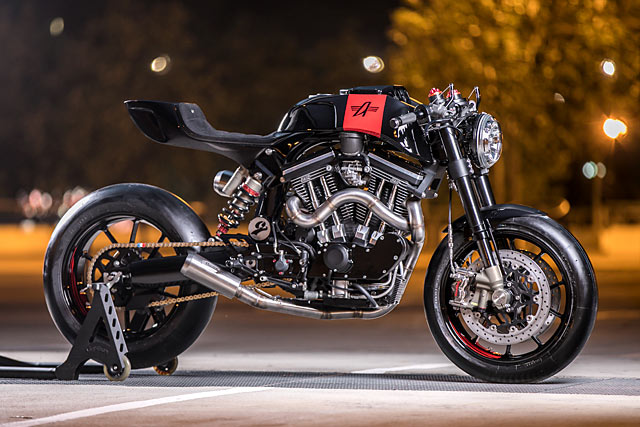 The idea of a European/American hybrid is not a new one in the automotive world, with vehicles like the Shelby Cobra using parts from each side of the Atlantic. A lightweight, well-balanced chassis with some Yank V-Power muscle to get things moving always seemed like the perfect combination. Inspired by the concept the French boutique manufacturer Avinton launched their Collector GT, a tribute to the Cobra in motorcycle form. Despite the quality of the product and the high-profile endorsement of NBA Superstar Tony Parker, things never really took off. So one lucky owner parked his 2014 model up until he could find a builder to truly complete the dream. Enter French motorcycle maestro Olivier Ortolani who took delivery of the big-ticket bike and sent home the perfect Ortolani Customs Avinton Cafe Racer. Olivier is no stranger to working on exotic machines or the Pipeburn faithful; having previously finished fourth in the 2017 Bike of the Year Awards with his incredible all alloy Ducati 1199 S Panigale. So being asked to completely modify a motorcycle worth more than $65,000 was not something he loses sleep over like most mere mortals. The client had purchased one of the very first Avintons off the production line, but wanting a few changes to be made had left the bike sitting for nearly five years before finally, in Olivier, finding someone he could trust with his prized possession. “The brief for this project was to lighten the rear of the motorcycle, which has a petrol tank, so a heavy part, visually. So I put myself in the visuals to reposition a tank of fuel on the front while keeping the particularity of the Avinton, namely the position of the air filter,” explains Olivier. That air filter is a bug catcher style scoop that fills the engine via the airbox but taking up so much room means in stock trim the Avinton carries its fuel below the seat. To fix the first of these problems a new tank was fabricated by hand from large sheets of hand-rolled aluminium. Maintaining much of the aesthetic of the original and yet removing the bulk from the rear. Now holding fuel, the tank sports a more sculpted look than the original with broader shoulders giving this Frenchman a muscular stance. The entire factory tail-piece has also been replaced with more brilliant aluminium sheet metal, each line meticulously laid down and hand formed until Olivier had the exact shape he was looking for. The dramatic scallops in the fuel tank have been mirrored on a smaller scale at the rear, a time-consuming process. Wanting to create contrast even on the seat, it has been stitched from two distinct pieces of material, Alcantara and gloss leather by NMB Design for a supercar style appearance. [superquote]“There is even the brilliant touch of mounting a push button starter in the bug catcher for that full on Hot Rod experience.”[/superquote]

But having removed so much of the bodywork from the factory machine it only made sense that something would be left exposed. Hanging out in the breeze was the wiring loom and lithium battery. But already having considered this possibility Olivier extended the lower half of the tail section, some of which neatly wraps around the frame and shock mount. Every last bit of this spare space is now used to hide all that wiring as well as a Motogadget m-Unit and LED taillight assembly. There is even the brilliant touch of mounting a push button starter in the bug catcher for that full on Hot Rod experience. All of this new work is mounted to the factory tubular frame that suspends the engine from the backbone and utilises the hollow tube in a sealed off section to act as the oil tank. Slung beneath it all is the thumping S&S V-Twin engine that at 1647cc sure means business. The quad cam motor and a lightweight bottom end with 10.3:1 compression will give a rev friendly 120hp and a tractor like 168nm of torque at just 3000rpm. But at Ortolani Customs that still not considered quite enough despite a weight of just 175kg.

To extract some extra cafe racer ponies Olivier had a perfect idea, “For the exhaust I wanted to make a system that doesn’t hide the architecture of the engine with a touch of MotoGP.” So he bent, cut and TIG welded a lightweight stainless system and finished it off with two race like end cans. In stock trim, big dollar Beringer brakes get the job done, but having chosen a more race inspired look and feel there was only one brand to turn to, Brembo! It’s all the latest technology gear with mono-block calipers clamping massive dinner plate sized floating and drilled discs. For most people a bike that comes standard with Ohlins suspension would be more than enough to keep them happy. But not Olivier and his client, the front forks have full kit internals from Italian suspension house Mupo, who also supplied a new mono-shock for the rear to better suit the new weight characteristics of the customised Avinton. Having removed so much mass from an already light and powerful motorcycle, further gains in performance can be had by reducing unsprung weight and no expense was spared when sourcing a set of Marchesini wheels all wrapped up in the stickiest liquorice strips, Diablo SuperCorsa slicks. Dressing the cafe racer up, Olivier selected a predominately black colour scheme with highlights in the factory red from Avinton. But always one for neat touches he hand fabricated both fluid reservoirs, adjourned the bike with just the right number of workshop logos and even painted a French flag on the chain. A Motogadget dash adds a little bit of glitz to the cockpit and to bring things into 2018 the stock headlight has been replaced for a brand new item from a Ducati Scrambler. It’s remarkable to think that the basis for this project was already an incredible machine, but the motorcycle that leaves the Ortolani Customs workshop was more than worth the wait for the patient owner. There is simply nothing else on the road like it; ferocious American horsepower, the finest of French engineering and a host of Italian parts from the MotoGP paddock. It has no name, but quite simply, it’s perfect and priceless!