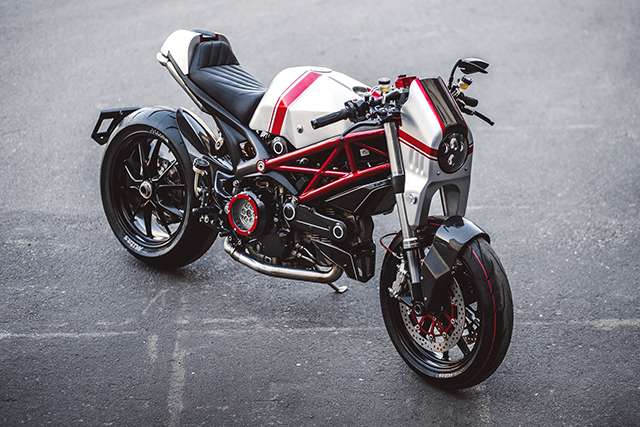 The agony and the ecstasy; that’s the roller coaster ride you learn to live with when you enter some of the world’s most prestigious motorcycle shows. But from his base in Russia’s beautiful cultural capital of St. Petersburg, Leonid Skakunov, has found a way to balance the triumphs with the adversities. And out of heart break, fuelled by determination, he took a bone stock 2011 Ducati 796 and crafted a show winning machine. It rolled into his Drive-in Workshop as a Monster and left as the God before you, Prometheus. 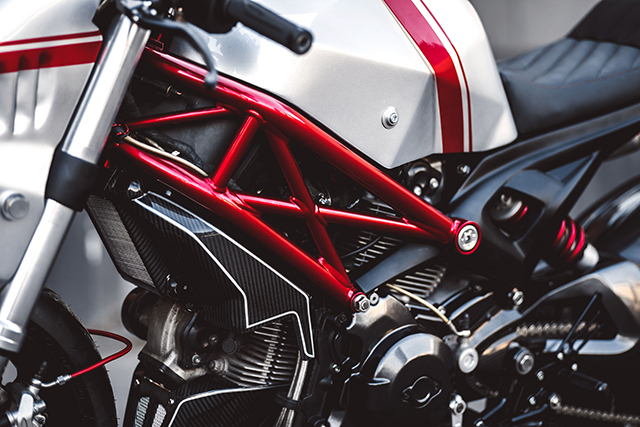 Leonid started his motorcycle building career as a mechanic across a number of workshops giving him a well established set of skills in all the fundamentals. But with a desire to have more creative freedom and spend more time building bikes for show than simply servicing them, he found a small location in the city and opened Drivein. It wasn’t long before the decision paid off and he’d taken home awards at the IMIS International Motorcycle Show and Russian Handbuilt Cup. 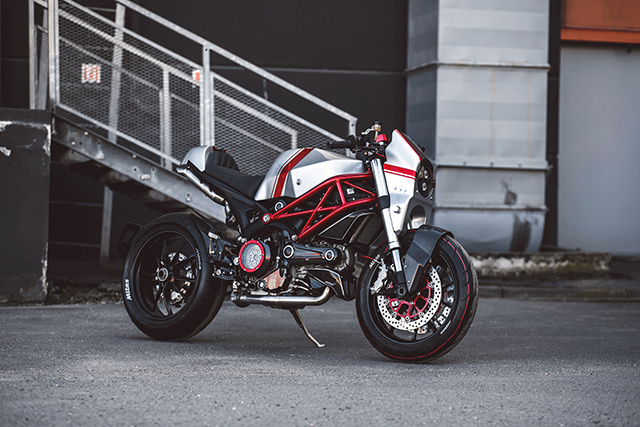 Next came a successful entry into the AMD, World Championship of Custom Bike Building, and things couldn’t have been better! But with nominations rolling around for another tilt at the AMD trophies, Leonid heard of new competition that came with the tantalising opportunity of a free motorcycle and cash to build it. His written entry made it into the next round, his design drawings went one better and his final rendering with help from friend Yegor Smirnov got him into the top ten! 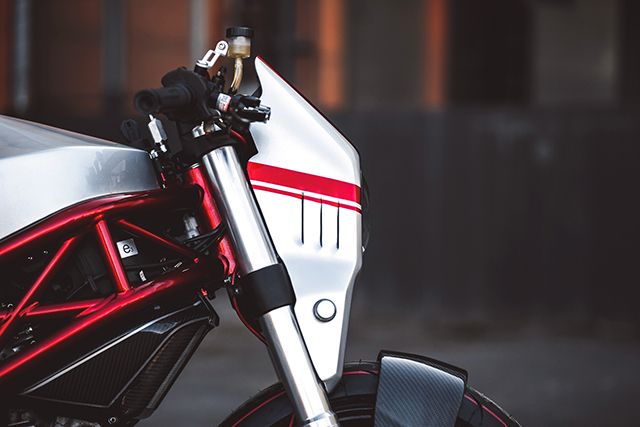 However, due to issues completely beyond his control, the journey ended there and that sick feeling set in. But quick to bounce back and with support from a loyal supporter, Oleg, who put his money down to be the owner, the brilliant renderings of Yegor would finally come alive! The Ducati was towed to the workshop and Leonid could finally do what he does best, build a showstopper! “The Monster is the ideal base for the project: a single-sided swingarm, a short frame, USD forks and radial calipers, I really liked the overall chassis,” he smiles. 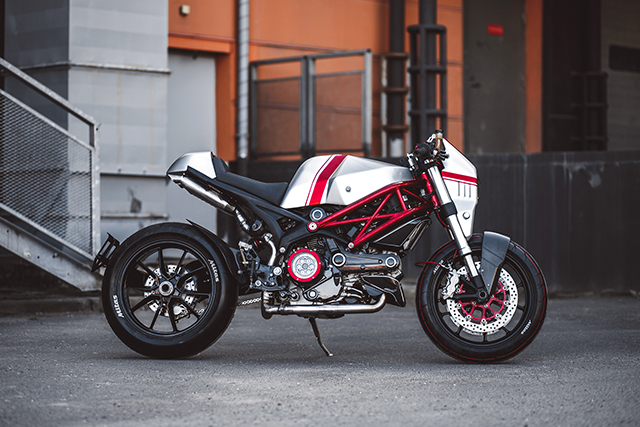 With the Monster stripped of all its clothes, scale drawings could be held against the frame to see what tweaks to the renderings might need to be made. What was immediately obvious was the large factory airbox would have to be modified to accept the fuel tank to come. With clever craftsmanship both retain their volume and Leonid began the process of hand forming the aluminium tank. The lines are very much in keeping with the Drivein Workshop style of ’80s superbike meets neo-cafe racer. 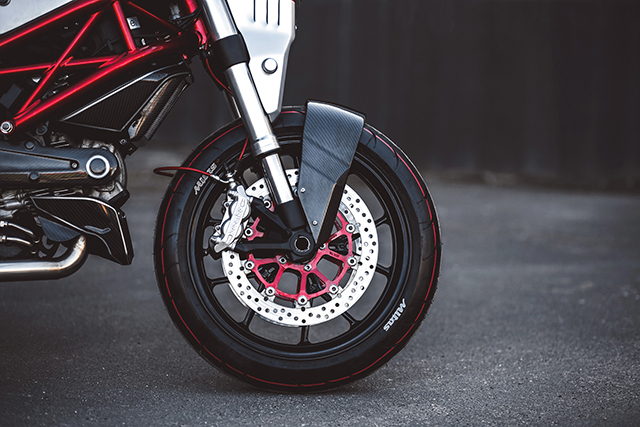 With the tank complete attention turned to the front end and the unique cowling designed to cover the triple trees from the front on. This is not a piece you simply hammer out one and done, it takes exhaustive hours of labour and constant correction until the piece is finished. Then it had to be trial fitted to ensure it didn’t interfere with the function of the bike. The next pieces to be built were the front guard and hugger, and despite the fact they would ultimately be made in carbon they’re first produced in alloy to ensure perfect fitment. 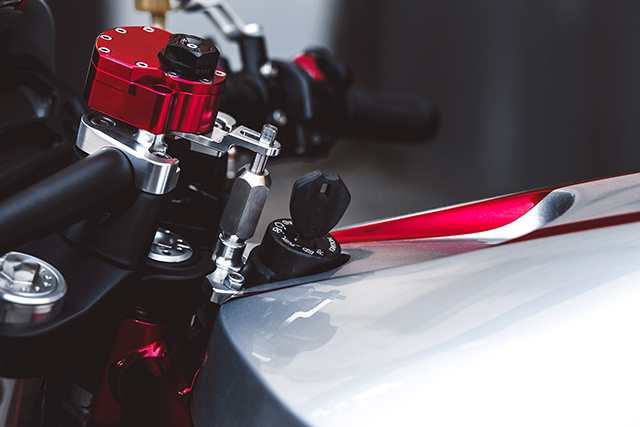 Moving to the rear and a change of subframe was considered before Leonid decided it would be cool to see if he could complete the visual effect he was after without having to fire up the grinder. The tail section follows the styling cues of the rest of the design, a mix of round profile that is complemented with sharp lines. The recessed carbon top piece flowing perfectly from the same design in the front. The paint only brings out the best in it all; Silver and Red candy are laid down throughout with a gloss finish applied over the raw carbon. 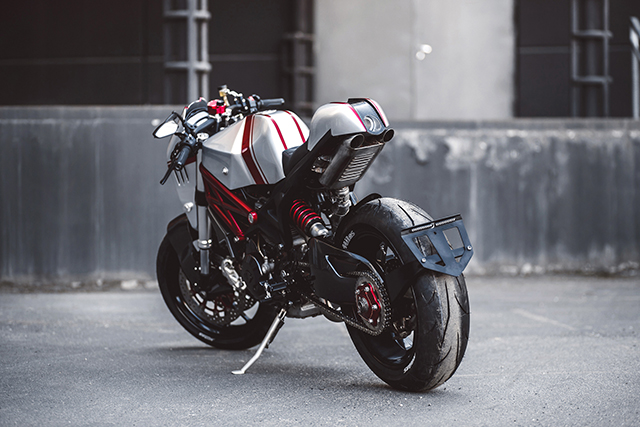 Even the functioning parts of the bike get a spray, with the frame, rear shock and inner parts of the brake rotors all Candy Red. Braided brake lines have been added along with a radial master cylinder to improve stopping power and a steering damper helps to tame the short wheelbase bike as it wobbles its head. Here too there is more paint applied, while the swingarm and engine cases get a white substrate added to the mix. With the final party trick appearing when the lights go down and the pinstripe work literally glows in the dark. 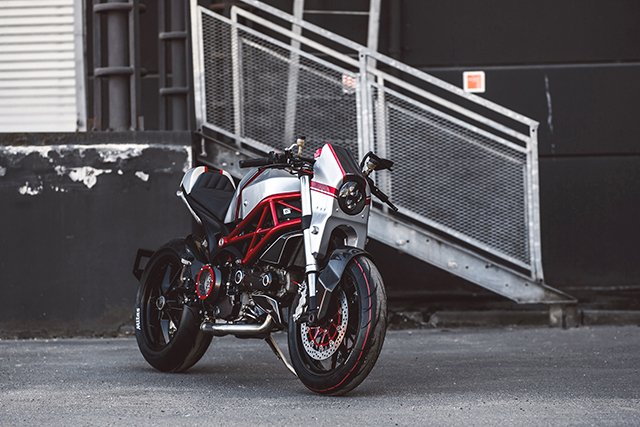 None of this is easy to achieve, nor is the exhaust system to extract some more ponies from the traditional Ducati L-Twin. The pipework is shaped to tightly follow the engine’s lines before disappearing under the seat with strategic carbon covers placed along the way. It all finishes out spitting flames from a custom muffler under the tail with the meshed out taillight glowing from above. Those who’ve studied Greek mythology know the name means ‘forethought’ and having designed the 796 build for a competition that he ultimately couldn’t enter, the prior planning has still resulted in Leonid being able to enter three other shows and picking up a bunch of trophies at them all! 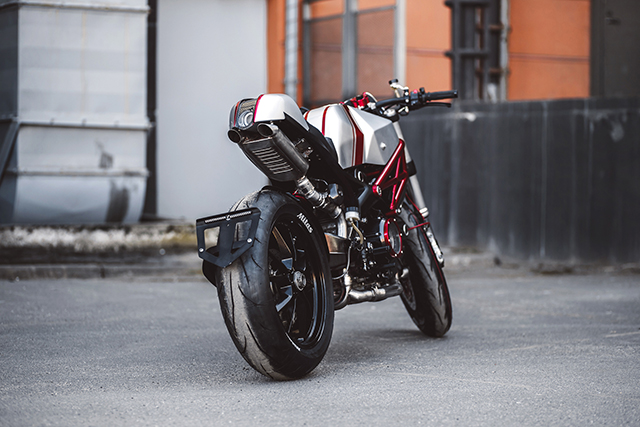 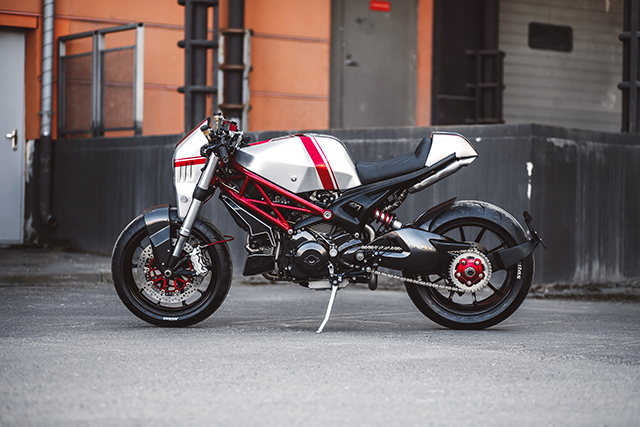 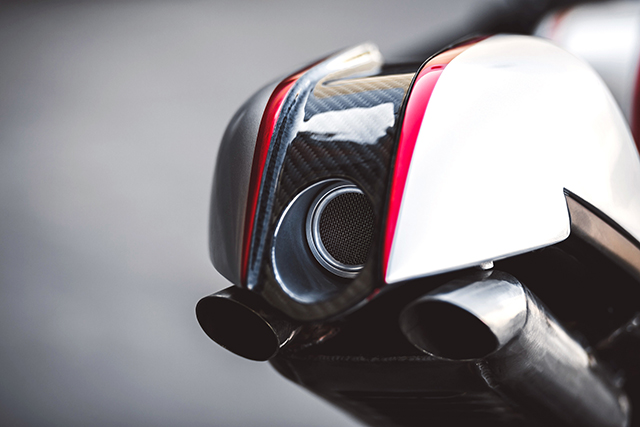 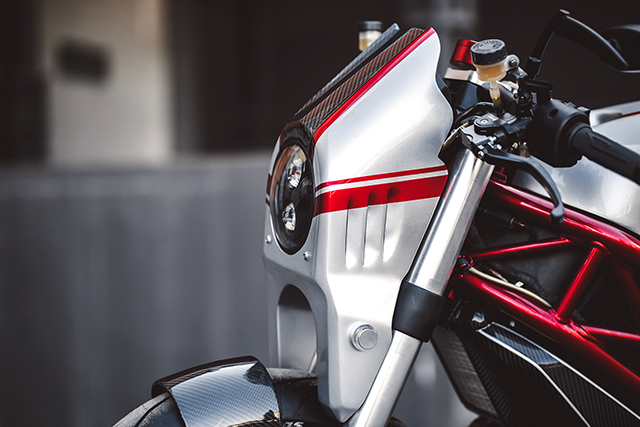 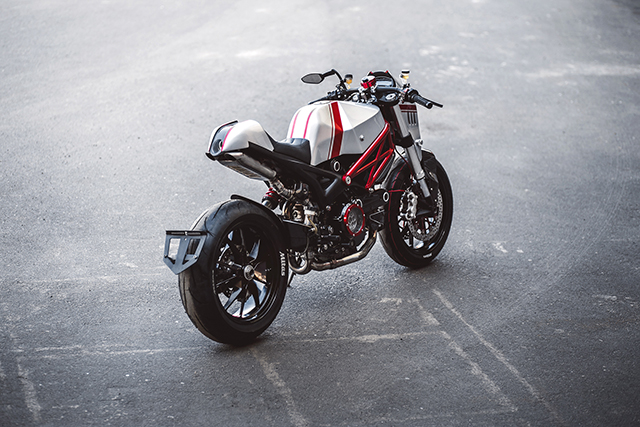 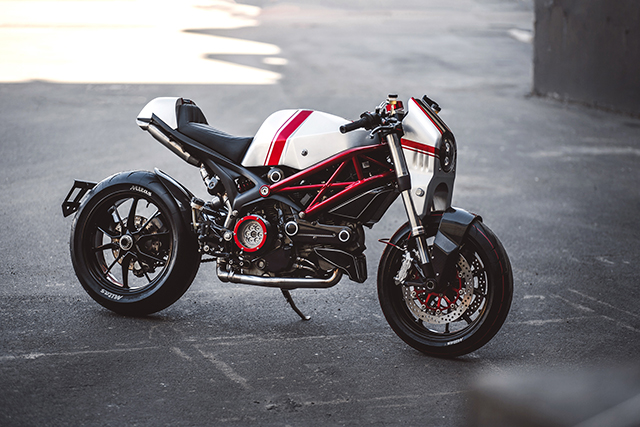