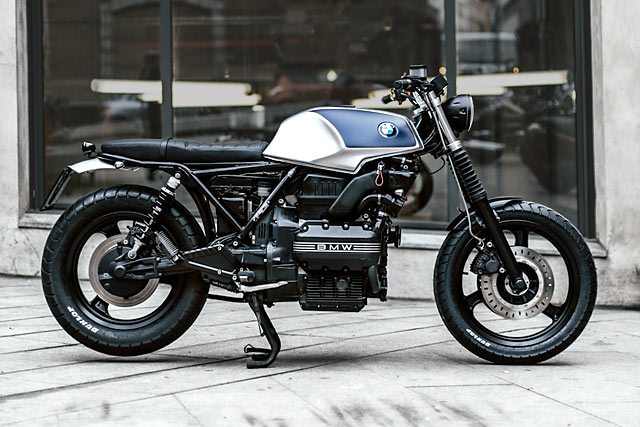 I always have an internal debate when considering commissioned custom works. Even when – like in this case – the owner says, “feel free to do what you like, but…” Bam! There’s always a ”but”. That “but” can mean so much more than you really planned for. Logically, the owner comes to you because he or she likes your work. But he or she probably also wants “a kind of bike” and – more importantly – has a specific amount of money to spend. Put simply, it’s all about balance. For this bike, the exact scenario was as follows. He was after a bike that looked a little different to everything else but not too aggressive, not noisy, something that could be used often – even daily – and with the odd passenger every now and then. Also he was specific about the seat design, so clearly comfort was an issue. And the rear fender had to be noticeable. And a round headlight. And gaiters. “But please, feel free to do whatever you like.” Sure! This is my second K in a row, but I don’t want to be a K specialist. I love all bikes in general and every one is a challenge that I always treat as a first attempt. And after facing the first K, the main thing now is how to do something I haven’t tried before. Most important was how to do something I would be proud of, but with the proper checks and balances for budget and the owner’s preferences while still having some fun in the process. Anyway, I was happy when he first rode the bike into my shop. I love challenges and at least I had some influence over the build. Also, despite his list of requirements, the owner was still open to my suggestions. From the very beginning, I had some clear ideas as to how I would proceed. I would be shortening the back, removing the BMW’s ABS system (which wasn’t working), binning the plastics and simplifying those “brick” lines.

From my point of view, the worst part of the K series is the rear of the frame. I love the tank despite its shape and I have still not needed to change it on any of my builds. But the rear frame tends to sit or drop uncomfortably and most of the simpler builds I’ve seen try to cover this drop with unsuccessful solutions, in my humble opinion. I was looking for that all-important horizontal line without building a complete subframe like I did in my BMW K scrambler. Again, this was due to budget restraints. I wanted the tank line to follow the visual line, too. That was done by dropping the front forks by 30mm, which also gave me the option to use shorter gaiters that I think look better. It also reduces the visual gap between front wheel and the engine, as the stock angle makes this area a little awkward.

I then welded two horizontal tubes under the tank to elevate it a little bit. Cutting the old rear part of the frame was the final step. I added a little up angle in the rear of the bike to avoid excessive straightness in that area. The seat follows the same approximate line and is far less bulky than the original. Other parts on the bike include Renthal superlow handlebars, a round headlight mounted on a handmade bracket, aluminium grips and rear fender, a Bates-style LED rear light, and small blinkers complete the visual set of aftermarket classic-looking upgrades. To give the bike a little touch of the retro-modern look, I had the idea to change the snowflake stock wheels with some BMW original Model S wheels. Dunlop Arrowmax tires were the choice to keep the original tyre measurements – perfect for a street legal bike. Besides, the cardan transmission leaves almost no room to add fatter tires on the rear.

A stainless-steel MotoGP style muffler gives the sport/modern look I was looking for and the ignition key was relocated under the tank to leave a perfectly clean front end on the bike, with just the digital gauge on show. Even the oil pressure indicator was installed in a cap on the steering nut. Most of the under-seat equipment was left in place, but painting the parts black – like EFI unit and battery – complete the colour scheme. A bespoke seat and some custom paint in a matte finish gives the final look to the bike. The best part? Seeing the face of the owner when I delivered the bike and knowing that I had got the balance just right and really nailed his dreams. That face!”