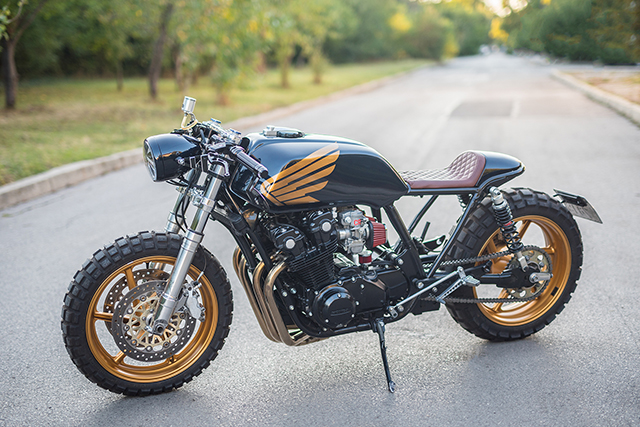 There can be a simple price to pay when you choose to roll with the pack and conform to what the current culture demands; everyone else is happy but yourself! For Victor Dikanchev obeying the rules was never going to be an option, he’d build his bike the way he wanted no matter the reaction. Living in Bulgaria where there is almost no bike scene anyway, his motorcycle would become an extension of himself. So help him bring it all together he enlisted KKKBikes and together they’ve built a brilliant 1982 Honda CB900F2 that’s quite at home dividing opinion. 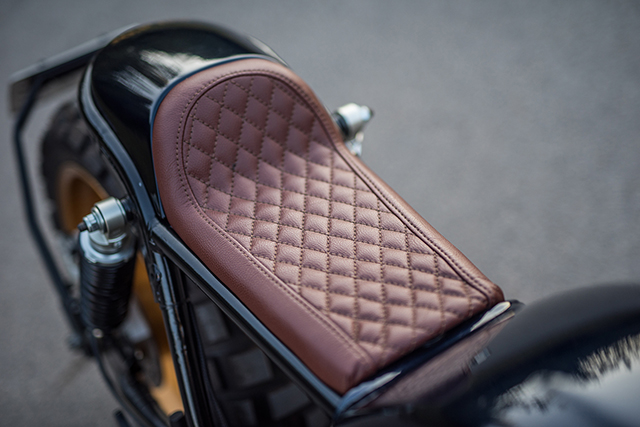 To best understand Victor and his custom you need to know about where he comes from, “I live in Sofia where the cafe racer culture is still in its infancy. There are very few people who own custom bikes in general and even fewer actually ride them regularly. What this means from a practical standpoint is that there is no such thing as a custom motorcycle industry here – you can’t buy aftermarket parts from anywhere and there is just a handful of people who do this for a living.” 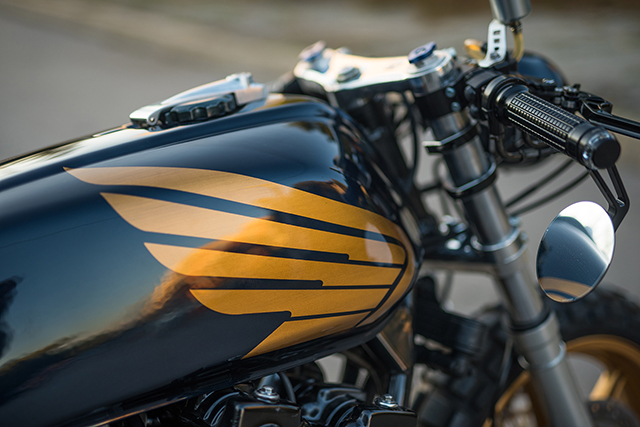 So with all those hurdles in his way, why bother building a bike to please others, “if a decision had to be made, we would give priority to form over function – the single seat, the riding position, the exhaust that is way too close to the ground. Nothing is comfortable or practical, but nothing was supposed to be.” Having previously met Kamen Harizanov of KKKBikes years earlier, Victor bought the CB900 from him in 2018 and enlisted him to help with the build. 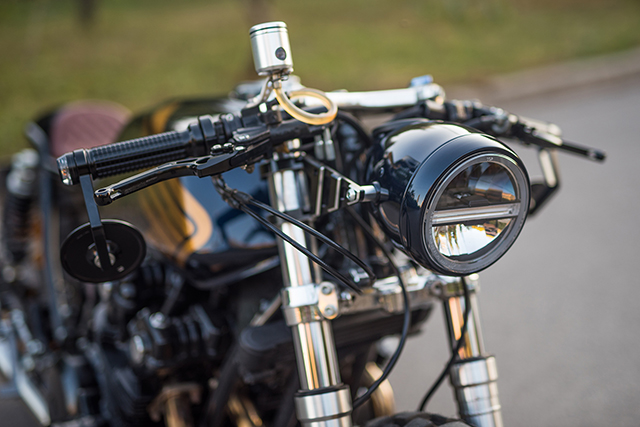 The F2 Bol d’Or was complete with the huge front fairing and extra plastic, but it had seen better days. So together they stripped it down and started to formulate a design that would suit Victor’s taste. The bare frame was in good condition but they cut off the tailpiece and welded in a new hoop with a recess for an LED taillight strip. The swingarm was smoothed out before it joined the chassis at the powder coater before it was all bolted back together with new stainless hardware. 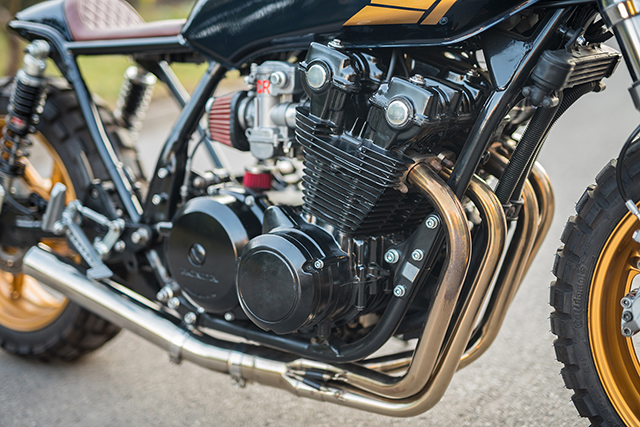 The big factory tank stays on the backbone but has been treated to an internal rust prevention and seal. But out back things have been dramatically slimmed down with the big F2 seat and tail replaced by a neatly integrated cowl. This is topped off with a form-fitting custom leather seat that is beautifully diamond stitched. While the gorgeous paint with a huge Honda logo and Bol d’Or graphics is laid down by Dimitar Nikolov from Picasso Moto Design. 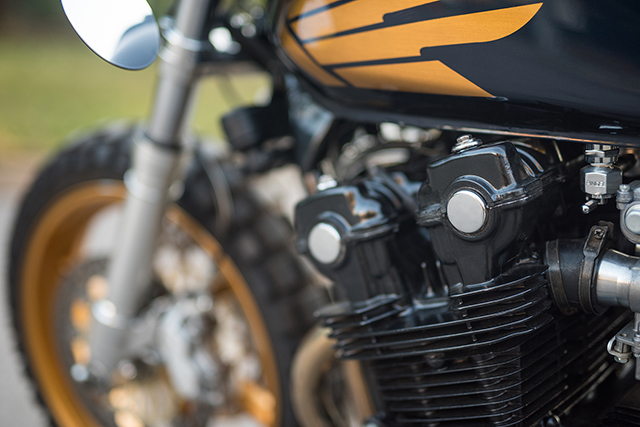 To turn the bike into a roller Victor decided to go with a modern front end, but not wanting to use USD forks, he selected a set of conventional items from a CBR900RR. Not only are they a significant upgrade over stock in the handling department they also came with the big brake package; Nissin 4 piston calipers and twin 296mm discs. The rear end is kitted out with YSS adjustable shocks and progressive springs and brake from the CBR, that also donates its wheels now in gold. 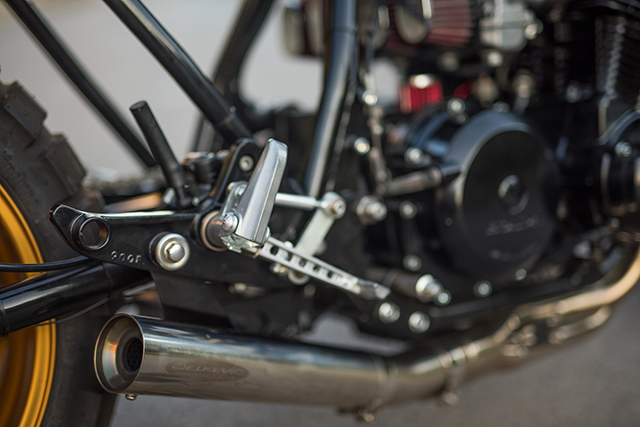 The 893cc engines are ultra-reliable, but nothing was going to be left to chance with a full rebuild undertaken. Keihin CR31 carbs topped with K&N filters provide perfect fuelling while the spark is brought into the modern era with a Dynatec Dyna 2000 digital ignition. A Delkevic 4into1 exhaust system provides the looks, sound, and performance that Victor was after. Before an entirely new wiring loom was built complete with lightweight lithium battery and matching Rick’s Motorsport compatible reg/rec. 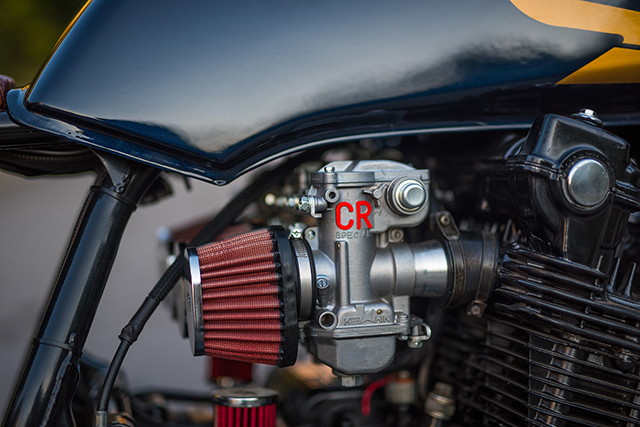 Having to order everything from overseas the guys ticked every box in the Motogadget catalogue to complete the lighting and accessories, with the headlight the only exception, a Daytona Neo-vintage LED. Then there are the Continental TKC 80 tires and Victor knew the controversy was coming, “I put them on the bike simply because I like the way they look, no other reason. They have a certain texture and tactile quality that I just like. People either love them and want to touch them, or consider them an insult to the cafe racer philosophy.” Either way the bike is ridden every day and in a country without customs and a world of conformity, Victor does it all in a style of his very own, Bravo! 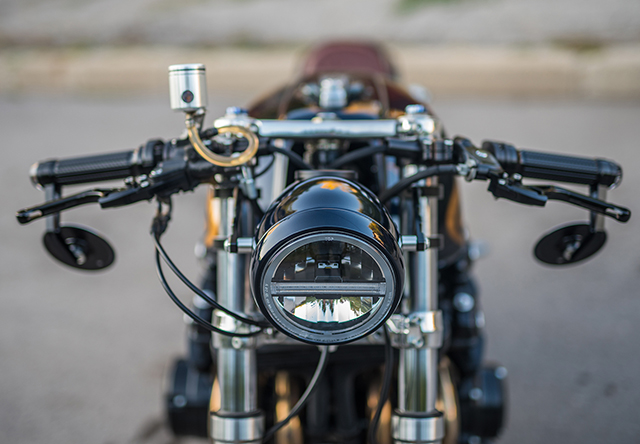 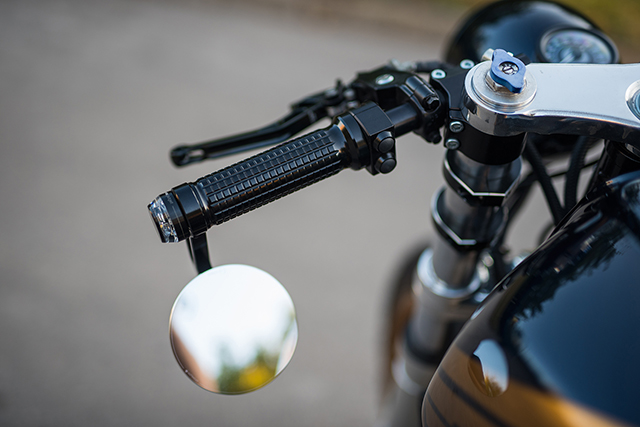 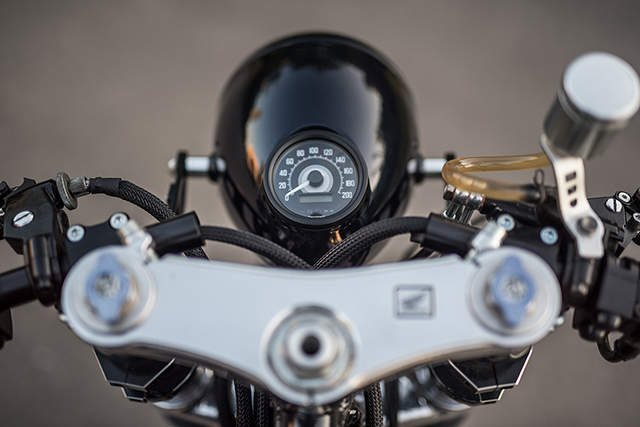 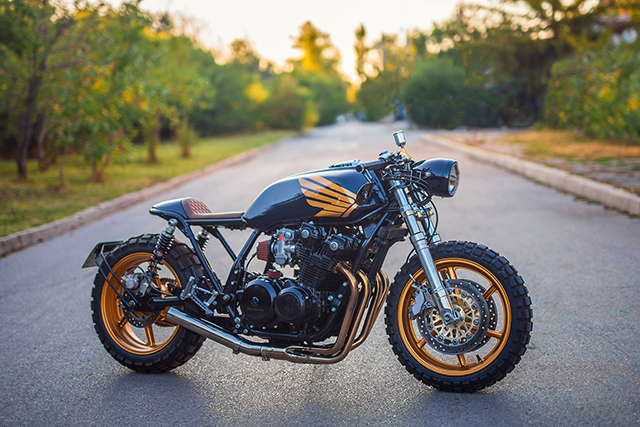