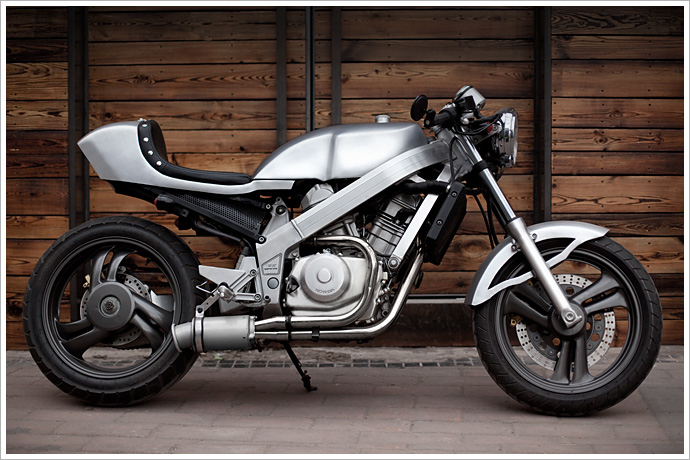 Now it’s time for a bit of education. Fear not, we won’t be attempting any calculus and the chances of us testing you are slim at best. See, in order to fully appreciate the bike you see before you, we’ll have to indulge in a little ancient Greek mythology as this bike has been inspired by a Hellenic demigod by the name of Hephaestus. If you were a metal worker, craftsman, blacksmith or sculptor in ancient times, chances are you would have been spilling a red wine libation to him on a regular basis. And as his symbols were a hammer and an anvil, it makes you wonder if more of us modern types shouldn’t be reconsidering our choice of big man in the sky. And as a matter of fact, there is at least one modern guy who’s done just that. His name is Daryl, and he’s the man who built the coolest Honda Bros this world, or any other, has ever seen. A perimeter frame. There’s something you don’t see on Pipeburn every day

Here’s Beijing’s local custom bike God and owner of Bandit9, Daryl Villanueva. “Hephaestus is the latest creation by our band of two-wheeled pirates at our Beijing-based garage, Bandit9. We named the bike in honor of the Greek God of blacksmiths, fire, and volcanoes.” “It’s an evolution of a 1988 Honda Bros 400, but we lost the bike’s original plastic exterior and refitted it with a modern, armor-like exoskeleton forged from steel. There’s nothing soft about the bike, except for maybe the seat, which is made of hand stitched black leather. The tank, gas cap, cowl, side covers and fender were all handcrafted by us from stainless steel.” Baby’s got back. Lights function both for indicators and brakes

”The tank was designed to have a mid-line bevel that carries through to the cowl and the fender. The side-covers with the dotted grill pattern were crafted from sheet metal. The handlebars were replaced with clip-ons also designed by us. The rear lights function both as turn signals and brakes; when you signal to turn, the corresponding light flashes. However, both rear lights flash red when you hit the brakes.” “However, there was one defining characteristics of the original Honda Bros that we kept. As it’s such a important part of the bike’s design, the diagonal cross beam made of an aluminum alloy guided the overall metal design theme. Besides that, the exhausts were shortened to expose the original single swing arm; thus making the rear wheel appear to float.” “This year, as Bandit9 grows, we are looking to move beyond the Chang Jiang. We are planning to increase our output and build more international custom motorcycles throughout the year. And Hephaestus is just our first step. To finish, we’d really like to thank Sofia and Niamh. Hephaestus would not be possible without your dedication and contribution. Cheers!”