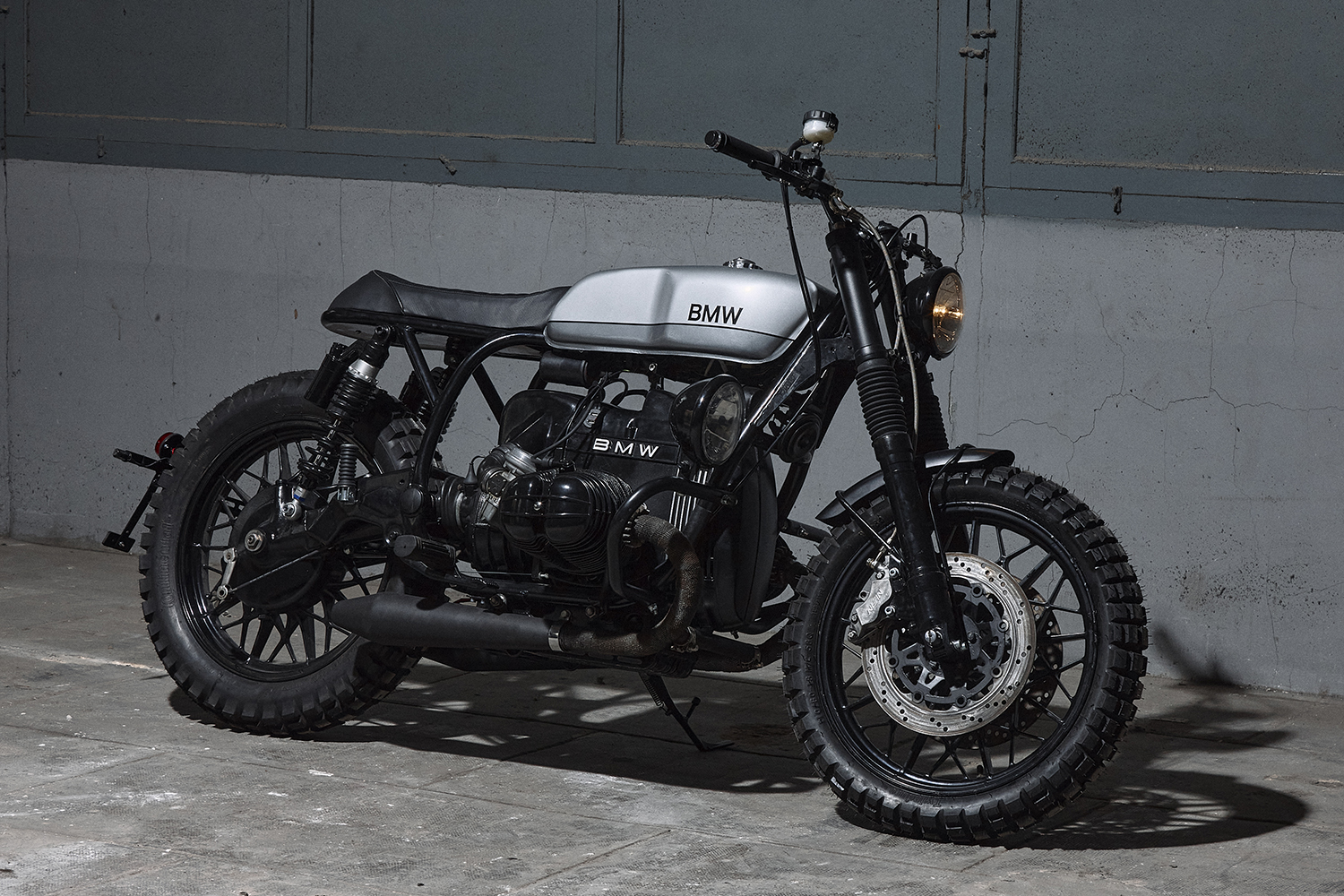 For whatever reason, the Spanish never seem to get the recognition they deserve when it comes to their prominent place in European motorcycle culture. Without a current major manufacturer, people seem to forget the contributions of Bultaco, Ossa, and Derbi to name but a few. Then you cast your eye across any motorsport category and the Spaniards dominate, not to mention their host of world-class race tracks that they fill to capacity with a passion for two wheels like no other. So it should come as no surprise that when prolific custom builder David González contacted us, he had not one but two new bikes to show off. From Ad Hoc Café Racers comes the perfect pigeon pair of tricked out BMWs with the attitude to match.

From his workshop just outside of Barcelona, David combines his diligent mechanic skills with an artistic flair that is fuelled by his passion for motorcycles. Not content just to skate through life, Ad Hoc was opened to feed his desire to do something he truly loved, and the results speak for themselves. The first of the pair is a 1990 R100GS that was to receive the more comprehensive changes of the two builds. Initially, you might think you’re seeing three different bikes in the photos, but to give his client a little extra something, the R100 was completed with two tanks that can be swapped out in a matter of moments.

The first is stock Bavarian brawn in the way of the classic shaped R design that replaces the GS tank that looks great on a Dakar replica but isn’t the sleekest of designs. Finished in a deep gloss black with hand-laid pinstriping and badges it gives the bike a timeless aesthetic. But clamp the fuel line and in a couple of minutes the BMW is transformed into a bespoke beast with attitude to burn. The second of the tanks is a small custom unit that shows off the big twin-cylinder engine for a mechanical muscle vibe. Matte black and raw steel are all business and there is even a hidden enclosure on top to keep your wallet.

“The fact of having two tanks also influenced the general concept of the motorcycle since we have also made a removable subframe in case in the future we want to make another variable or add elements such as suitcases or a luggage rack,” David explains. A set of crash bars has been added and along with the main frame and new subframe are finished out in a matte coating. The seat unit itself is generously padded with foam, hand-shaped, and then topped in Alcantara for a touch of class. On top of the crash bars, a spotlight has been added on one side and the oil cooler on the other for a utilitarian appeal. While a classic café headlight is joined at the front by a small fender on custom struts to finish the look.

The stock rims remain wrapped up in ultra aggressive TKC80 rubber, but the rest of the running gear gets a big overhaul. The entire front end is swapped out for Kawasaki components, the big 41mm forks paired up with 300mm twin disc brakes for a drastic improvement over stock. At the rear, a fully adjustable WP shock transforms the riding experience and allows the owner to dial the bike into their needs. The engine has had the factory exhaust cut down, wrapped and a pair of underslung mufflers fitted. While the carbs now draw air through K&N filters and the battery has been relocated for a clean look.

The 1981 R45 build might not be as comprehensive but it’s definitely filled with character. To instantly transform its appearance David modified a Yamaha RD250 tank to fit the BMW and painted it up in signature Ad Hoc style. The subframe is modified with a hooped rear end, the underside shielded with steel, and a perforated leather seat added over the top. Just like its big brother a set of crash bars has been fitted, painted up like the frame in gloss black, and a spotlight added. The bates style is also used for the headlight and another of David’s handcrafted front fenders on custom struts is fitted.

This mounts off the new forks, massive 45mm units that come from a Honda CBR900 with 320mm discs and the sportsbikes calipers. The twin rear shocks have also been swapped out for adjustable units, while the factory wheels remain in place and wear Continental TKC80 tyres. The formula offers maximum functionality on and off-road, so to ensure the fun never stops the engine has been rebuilt and repainted. The factory airbox remains, but like its big brother, the exhausts are now relatively hidden with the wrapped header pipes fitted up with a set of twin peashooter mufflers that are finished in ceramic black.

Both machines have been completely rewired to the highest standard, with a range of quality Motogadget gear throughout. The R100 gets the biggest transformation with an m-Unit blue mounted under the tank and race style multi-coloured push buttons replacing the switch blocks. LED lighting is also supplied by Motogadget with m-Blaze indicators offering a clean look on the new bars that are matched with Biltwell grips. Both bikes also have new master cylinders and a full array of braided brake lines finish them out, David never cuts a corner. The only thing left to do is fire ’em up and ride and whether your Ad Hoc build is big or on a budget, they’re always badass.