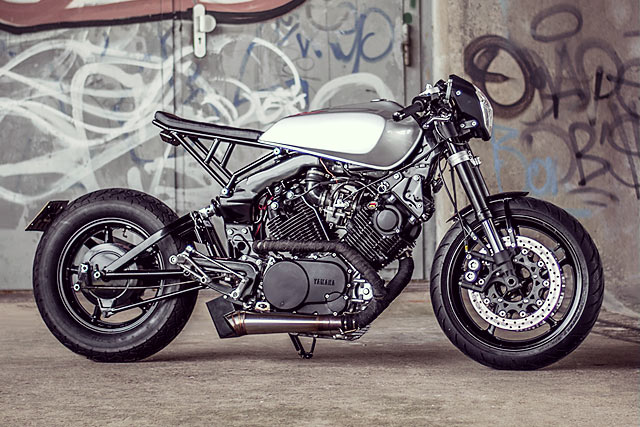 Having owned Viragos ourselves, we know all too well that customising them without treading on anyone’s toes can be a tricky endeavour. With some of the industry’s best builders all making their mark on Yamaha’s innovative stressed-member v-twin, it’s damn hard to do anything that people haven’t seen a million times before. But with this thought in mind, Sergei from Dutch grinders Ruthless Customz took up tools and created this rather cool and decidedly unique XV interpretation. He calls it ‘The Beast’. Sergei started Ruthless Customz in 2015. He’s had a real love for bikes since he was little and he’s been messing around with them for real since the age of 16. So in ‘15, he decided to start building them from start to finish. “Everything I know about building bikes, I taught myself,” he says. “Then one day I was watching Cafe Racer TV and I saw an episode where they were building an XV750. There was something very special about that bike, so I started doing some research on Viragos and they really started to inspire me.” Bitten by the bug, Sergei found himself trawling through the local classifieds for an XV. “I found an ‘83 XV920 close by, but when I got there the bike didn’t even run. Despite my better judgement, I took a gamble and bought the thing there and then. Next, I started building it the way I wanted it to be; there where so many Viragos out there, I knew I had to make mine stand out.”

“It was hard because I had to figure everything out myself as there where no other local builders who knew anything about them. Also I’d never really swapped a front fork before, especially from a new bike to an old one, so I needed to do a lot of research to find out how to get it done right and safe the first time.”

Wanting the thing as clean as possible, his next task was figuring out a way to hide all the cabling. While it was tedious work, there were some hidden benefits to the process. “Halfway through, I decided that I liked the starter button being hidden out of sight under the tank. Now everyone who wants to ride the bike always asks, ‘Dude! How do you start the thing?’ It’s fun to give them a surprise by asking them to try and find it.” “The build was difficult at first because there where just so many custom Viragos out there. I loved them all, but I really wanted to make mine stand out and design it in a way that no one really had done before”. After much thought, Sergei decided to focus on the seat and subframe, the front forks and the headlight. “Most people use a round headlight on Yamaha XVs, but I didn’t want that; I wanted the front of the bike to look as mean and as bold as possible.” “Now that it’s done, I’m able to look back and say that I really love everything about the Yamaha. But the best part for me is how it all comes together: the front forks, the tank and the subframe, to me it looks exactly like the mix of sportsbike and old cafe racer that I had in my head”.