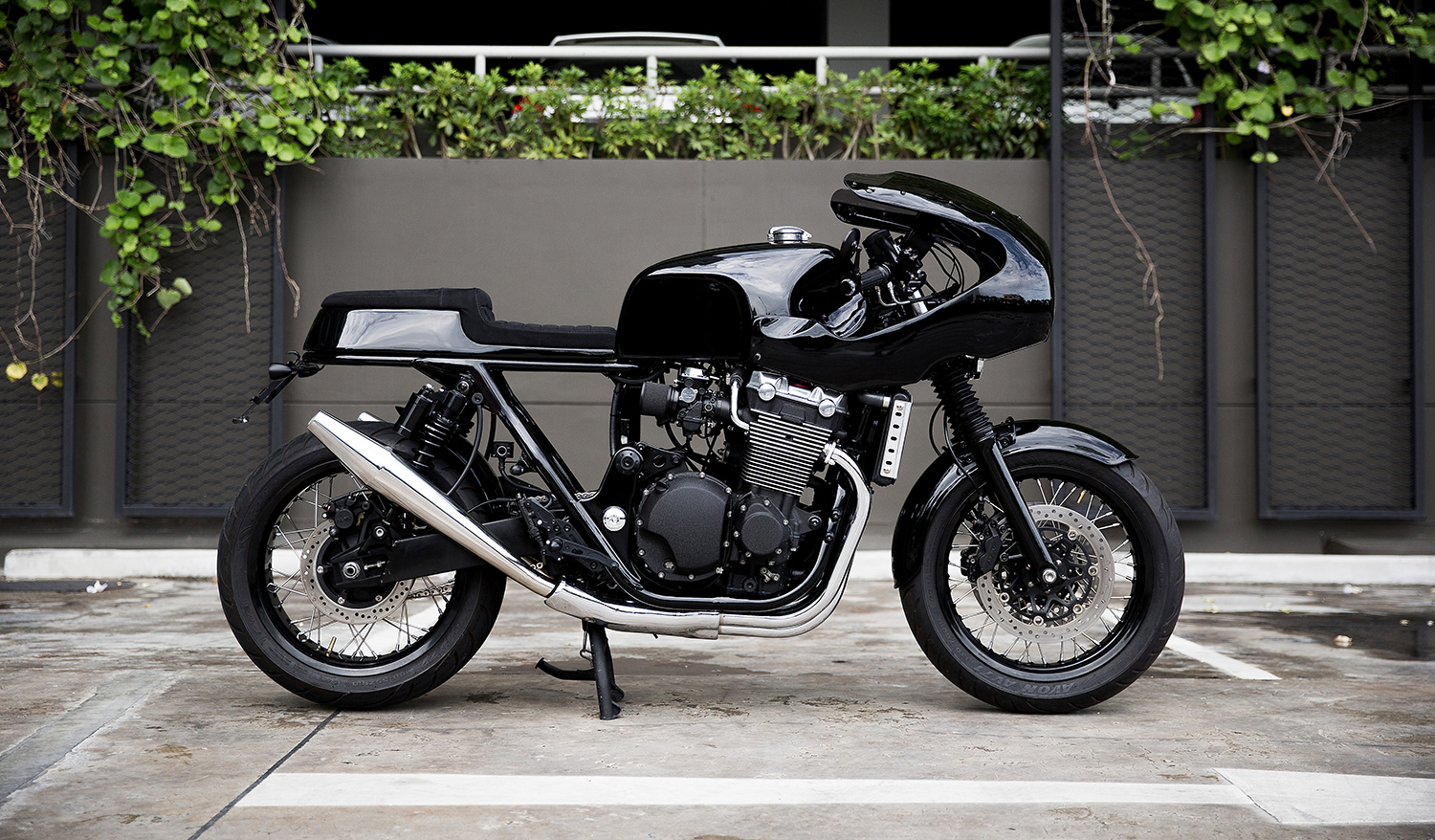 It’s fair to say that Honda’s CB range is one of, if not the most popular platform for customization of all time. And with cafe races constituting a decent chunk of the one-off CB builds in existence, it’s become decidedly difficult to bring something novel to the table when working with one of the iconic Japanese donors. So, when Thailand-based amateur builder, Thomas Danet opted to take on a “City Bike” project, the French ex-pat, selected one of the least-commonly modified variants out there; a first-generation JDM Honda CB1300.

“The first-gen CB1300 was a muscle-bike-era machine, made to compete with the (Yamaha) VMAX. It is carbureted and quite brutal with a 0-100km/h (0-62mph) in just shy of three-seconds, and 93ft-lbs of torque on tap. The later generations had EFI and were tuned down for a more ‘civilized’ ride,” Danet tells us.

Right off the bat, Danet knew the biggest uphill battle he’d face over the course of the project would be finding a way to get the donor’s behemoth size to jive with the traditionally nimble and performance-focused cafe genre. So, rather than trying to turn the 1.3-liter CB into something it’s not, Danet leaned into its muscular nature, going with a hot-rodded meets cafe’d design that he calls a “Muscle Racer.”

“The main concept was to scale everything up to match the engine size. So, pretty much everything had to be fabricated in an effort to harmonize the proportions as much as possible,” he explains.

Before Danet could dive into customizing the Honda, the bike was in dire need of some serious attention, after having been left to rot for the better part of the last two decades. “Everything was caked, rusted, and/or broken, so the engine had to be torn down to the last screw then rebuilt, with every single part restored, changed, or upgraded along the way. I’m not a professional builder and this is just a hobby for me, so the entire build, all told, took a little bit over two years,” recounts Danet.

With the 1,284cc inline-four now overhauled and resealed, Danet moved onto the chassis, first de-tabbing the structure before hacking off the original aft-end. In its place, there’s now a new subframe, following a straight, slightly-upward line before looping at the tail. Directly beneath, the stock swing-arm has been jettisoned in favor of a more contemporary unit off of a late-model specimen that’s now paired with a set of adjustable Nitron shocks.

Wanting to further play with the CB’s stance, Danet modeled the bike’s stock hubs in 3D before CNC-machining new spoked replicas that enabled him to lace up larger 18” wheels — consisting of bare stainless steel spokes laced to Excel rims, shod in Avon Cobra rubber — while still utilizing the stock calipers and discs. Out in front, the original fork’s been shortened by 40mm (1.5”) to partially balance out the increased wheel size. And, on top of being stripped, anodized, and rebuilt, the stock braking system’s also been treated to top-shelf Beringer master cylinders and levers, and HEL lines.

Before being dropped back into the frame, the 16V four-banger was powder- and ceramic-coated, resulting in a fortified coating that looks like it should be lining the bed of a contractor’s pickup. Polished and ceramic clear-coated valve covers and cooling fins were added to the mix to contrast the bevy of blacked-out elements that comprise the majority of the build. The carbs were also torn down, rebuilt, and re-jetted, before being powder-coated and chromed. The frame, rims, fork-tubes, and swing-arm have also received the powder-coated treatment, albeit in a glossy black.

Over the course of the restoration, it became clear the stock electrical system was well beyond saving, so Danet went about whipping up his own from scratch, calling on a custom-built harness, a Motodadget M-unit, and an Antigravity battery, amongst numerous other minor aftermarket bits. “The only original electrical part kept in the build is the rear brake switch, and even that had to be rebuilt,” says Danet.

Next came the bodywork, where European-born Thai transplant looked to Grand Prix racers of the ‘60s and ‘70s for visual inspiration. Using aluminum sheet metal, the talented hobby builder fashioned a low-profile tail section which shrouds a skeletal structure that houses much of the CB’s new electrical system between its best of ribs. The tank is a more bulbous item, though recesses for the handlebars and pronounced knee-dents result in an unmistakably vintage, performance-focused cell that shares the same visual theme as the build’s other bodywork. Completing the suite of new bodywork is a pair of one-off fenders with a larger more retro-style item out in front and a smaller more contemporary tire hugger in the back.

The tail section also sports a custom fiberglass seat pan and a pressure-molded foam seat. Following the curve of the seat before extending up onto the top of the tail cowl where it serves as a passenger seat, the bike’s bespoke saddle’s been upholstered in black marine-grade Alcantara and given grey accent stitching.

Also composed of aluminum sheet metal, the 1300’s half-fairing is undoubtedly its most modern-looking addition, with the top capped off with a smoked windscreen and either side of the bottom feeding into the front half of the tank just beyond the knee dents — a la the half-fairing on Ducati’s Sport Classic and Paul Smart 1000 LE. The fairing also houses the build’s LED headlight setup and boasts a surprisingly involved bracket and mounting arrangement.

“Built by Purpose Built Moto, the headlight is part of the front fairing mounting to the bike. The nose cone has a rim sandwiched between the two halves of the headlight’s CNC’d housing, while the housing itself is bolted to a three-point bracket welded to the frame neck,” elaborates explains.

The taillight is comprised of a stacked trio of tiny 6mm LED lights sunken into the back of the tail cowl, while rear turn-signal duties go to a pair of small circular Kellerman items protruding from both sides of the license plate bracket. The front indicators consist of a set of Motogadget bar-end LEDs supplemented by the same brand’s M-Blaze Pins on the sides of the fairing.

The cockpit is another thoroughly impressive affair, starting with a custom-made set of Clubman-style bars fitted with high-end Renard Speed Shop aluminum switches and Motogadget grips and bar-end mirrors, Set on powder-coated risers, the handlebars feature a mini idiot light display and a quad-gauge Smiths instrumentation setup (tach, speedo, fuel, and temp) mounted in custom 3D-printed carbon cup brackets. The custom-fabricated handlebars are also equipped with 3D-printed wire trunking, and see the entirety of the wiring routed internally through the bars and down through the triple tree, making for an incredibly neat and uncluttered rider’s quarters.

Popping against the blacked-out background of the build is a polished custom four-into-one exhaust culminating in long reverse cone mufflers. Made in the UK, the pipes rest in bespoke brackets at a 45-degree angle, furthering the Muscle Racer’s cafe’d aesthetic. Other top-shelf touches are found throughout the build, with black-anodized adjustable rear-sets and matching pillion pegs, a billet brake reservoir from Driven Racing, and carbon fiber chain and heel guards. “There’s no more plastic on the bike, and with the exception of the carbon pieces, it’s all metal,” Danet proudly states.

Matching the frame and swing-arm is the aluminum bodywork’s coat of deep gloss black paint. Danet says the climate where he lives in Thailand is known to wreak havoc on even the best stainless steels, so pretty much every part on the build has been powder-coated, anodized, ceramic-coated, or a combination of the finishes. Most of the screws and bolts on the bike were also replaced with highly-corrosion-resistant titanium hardware for the same reason.

“The result is a very classic cafe racer with a cruiser wheelbase, that’s much bigger than the average (Triumph) Thruxton or (Royal Enfield) Continental GT. In total its weighs in at around 270kgs (595lbs), and by comparison, makes Harley-Davidson Fat Boys look small,” states Danet.

Now fully completed, the Honda currently serves as Danet’s daily commuting bike, and with more torque than most MotoGP bikes, the thing almost certainly goes as good as it shows, even with its rather hefty weight. It’s also abundantly clear that Danet being a designer by trade hugely benefitted the outcome of the project, with each individual element and modification being calculated and considered both alone, and collectively as a whole to generate a single cohesive design. We certainly wouldn’t mind if Thomas Danet’s CB1300 Muscle Racer kicked off a new trend within the cafe category.