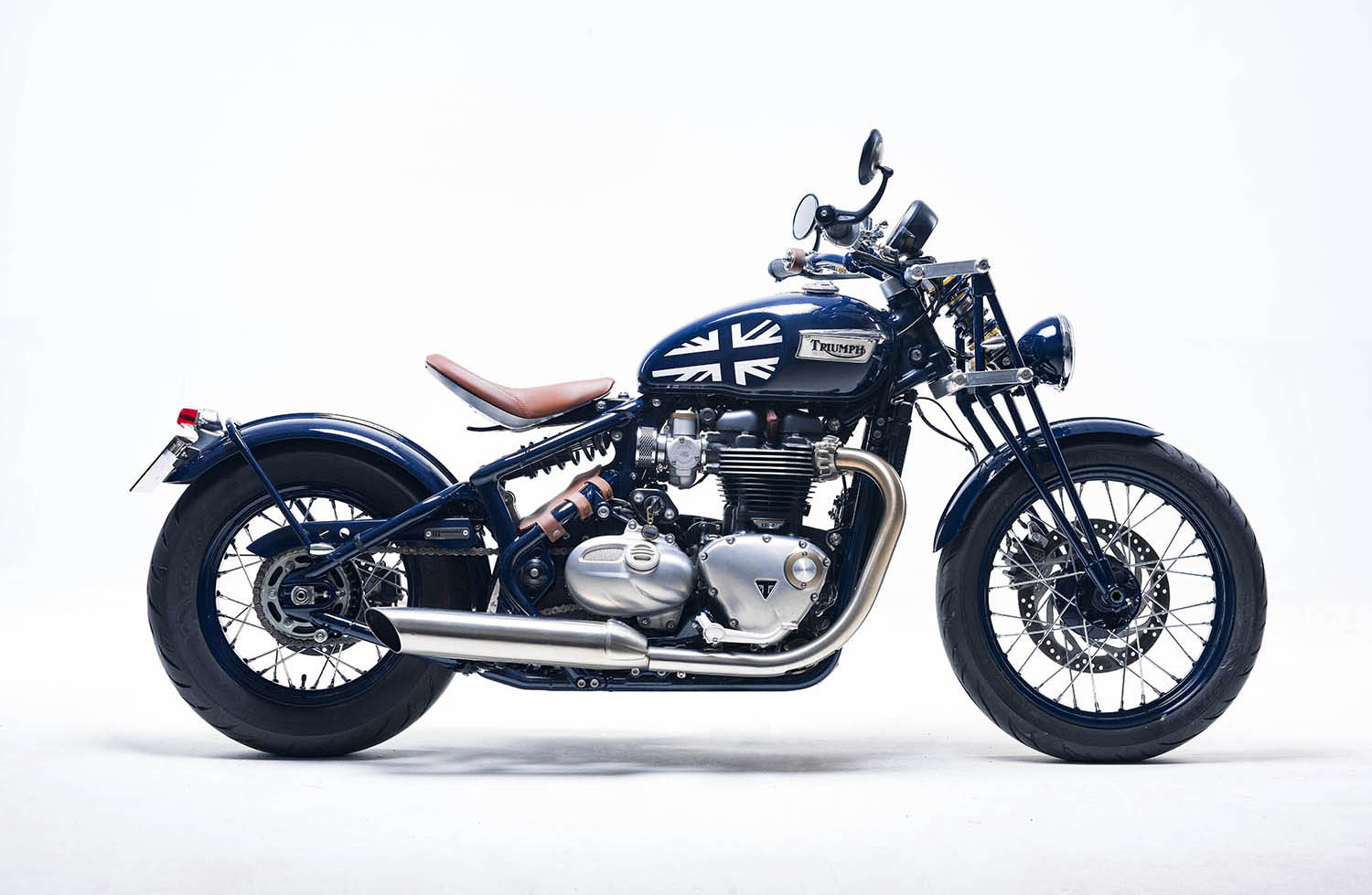 To say that Triumph’s retro range of modern bikes has been the saving grace of the company would be an understatement. Back from the dead and the company is booming, with the Bobber the fastest-selling bike in the history of the firm. But for some, there is a certain je ne sais quoi missing, perhaps the lack of raw and mechanical feel of those original British beauties. Away from the influence of a crowded scene, China’s Mandrill Garage has been producing a host of truly inspired custom machines and when presented with a brand new Triumph Bobber, they knew exactly the direction to take. Lou Hao and the boys have gone back to the bare bones of the ’30s to give the modern machine a real retro makeover.

No stranger to the Triumph brand, Lou has mixed feelings about the new water-cooled retros “This generation design is much better than before, frame, engine, detail all good, but it’s too ‘perfect’, there is nothing left for modifiers.” Having had a few Bobbers come through the garage they’ve noticed a trend of clients simply wanting a few things added here and other pieces taken off there. But no real comprehensive design or change to truly reimagine the bike in a way that really spoke to them.

Flipping through the history books and the British Bobbers of the ’30s really stood out to them, Norton, Matchless, and many others offered sweet looking rigid rear motorcycles and all featured a girder front end for a machine with a real mechanical presence. A far cry from the plastic fantastic look of the modern market. It is clear that Triumph too drew a great deal of inspiration from this period in their design, the soft tail frame is made to look like a hardtail, the injection like a carb and so on. So the Mandrill crew simply saw it as their job to take the bike all the way and stripped the new machine back to every last nut and bolt.

This is just how they do their full custom builds and it means that every detail is picture perfect! At the front of the bike is the most obvious change, a new custom girder front end that totally transforms the look and feel of the bike. Having previously built a similar unit for a BMW the crew took a different path than before, with the machined linkages on the outside of the legs in a more traditional design. Not impressed with any off-the-shelf offerings they also spent a great deal of time on the geometry, integrating proper steering stops and modifying the steering stem for a perfect fit.

A big dollar Gears Racing shock allows the front end to be properly tuned and dialed in to match the factory rear. Having previously adapted twin radial Brembo brakes to their girder front ends, this time they decided to stick with the traditional vibe and make mounts to use the single disc from the factory bike that offers more than adequate stopping power. At the top of the new fork, a custom set of bars and risers put the hands of the rider in the right position, with a clever mount allowing the factory cluster to remain.

But when it came to the controls Lou wanted to go truly old school, “The left hand switch I used wood on a CNC machine. A furniture designer friend helped me, the right hand switch cannot be made small because of the electronic throttle, but I made a CNC shell.” To match, retro-styled chrome levers were fitted up and an aftermarket polished master cylinder was added to complete the look. The remainder of the electronics follows the theme with a Lucas tail light and a Bates style headlight for that truly traditional feel.

Having had the bike in a million pieces allowed the crew to ensure the paint was able to be applied to just about every part. This was an important part of the build, as it follows the way bikes were built before aluminium and fancy coatings were available. The non-gloss blue is the perfect pick and allows the small amounts of chrome, like that on the ’60s tank badges, to really pop. Even pieces like the modified chain guard with custom badge and front spring were given the old blue treatment. With a tasty contrast coming in the way of the retrimmed tan seat and electronics cover.

With bikes from the ’30s not featuring side covers, Lou was determined to ditch them, which meant the airbox also had to get tossed aside. Now feeding the twin throttle bodies is a pair of chromed and meshed filters that allow more of the blued out frame to be exposed. To finish the build off a new number plate holder was mounted and a tiny set of bullet indicators and bar end mirrors keep the authorities happy. “The modification concept of this bike is low-key,” Lou tells us. But the change is immense and truly gives the Triumph Bobber the very best of both worlds, old and new, East meets West.