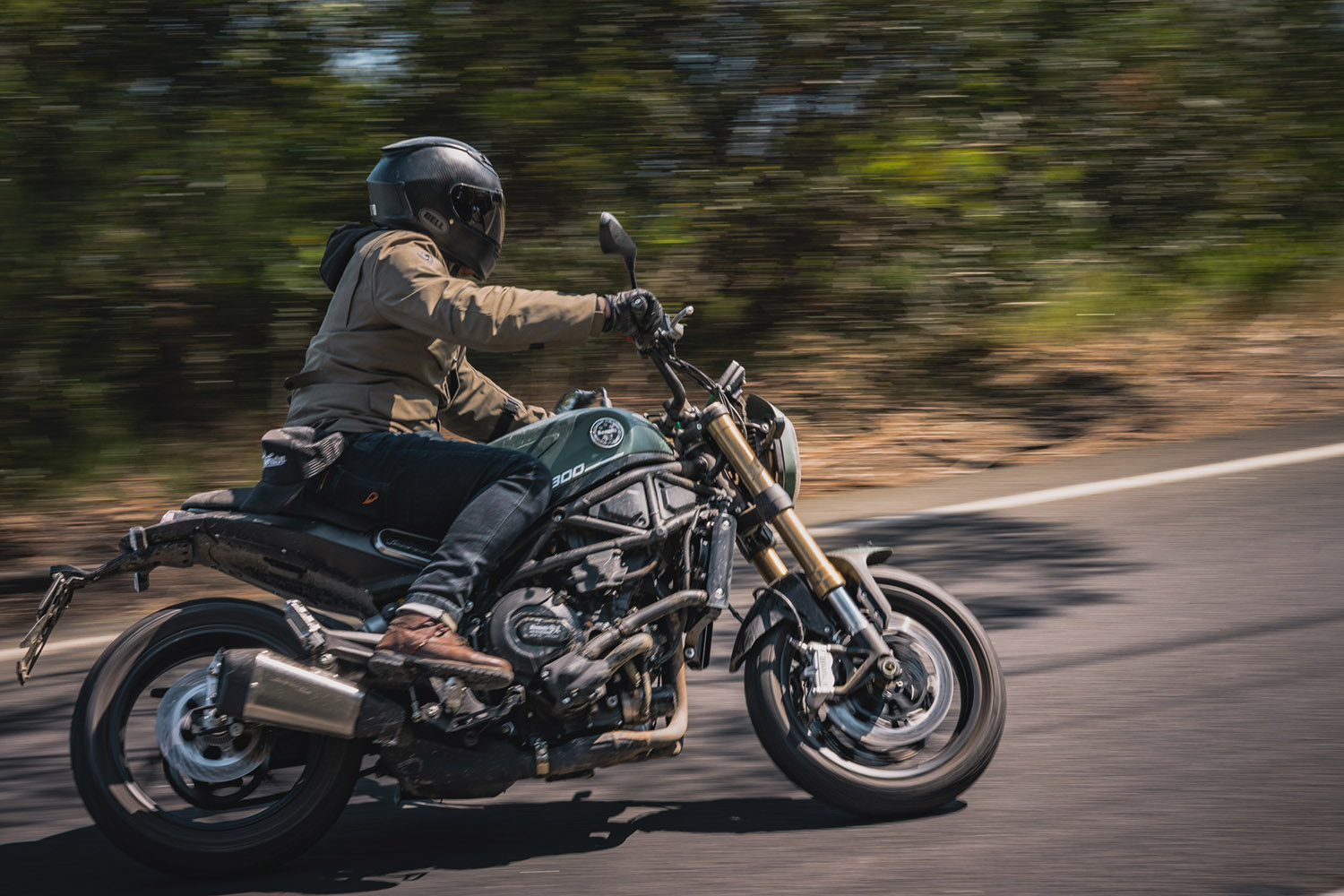 If there is a God, he obviously loves the Italians. He blessed them with an eye for design, a beautiful-sounding dialect and an abundance of self-confidence. So whenever the Italians build a motorcycle, it’s usually easy on the eyes, sounds amazing and is obviously sold with a lot of hand gestures. Which brings us to the latest offerings from one of the oldest Italian motorcycle manufacturers still making bikes today – the Benelli Leoncino 800 and Leoncino Trail. We spent a few days putting the duo to the test, and I mean it: we pushed these bikes to their limit on some of the best and worst roads in Australia.

To be honest, I was surprised that the Benelli team took us riding on these extreme conditions, because in reality the Leoncino Trail isn’t an enduro or adventure bike – it’s a naked road bike that has some high scrambler pipes and dual sport tyres. This could have gone two ways: either we destroy the bikes and write about how bad they are, or they survive the stress tests and we rave about how impressed we were.

But before I go into more detail about the Leoncino – which in Italian means ‘little lion’ – let’s talk about the little elephant in the room. While Benelli is one of the oldest Italian motorcycle manufacturers in the world, none of their bikes are made in Italy anymore, although they still design the bikes at their head office in Pesaro, Italy. It’s obviously become common practice for moto brands, as the Chinese are leaders in mass manufacturing and make it much cheaper and therefore easier to turn a profit. Especially when Benelli is owned by the Chinese company, Geely Holding Group, who also own Volvo and Lotus.

Which brings us to the burning question – how do they ride? We picked up the bikes in Melbourne and headed down south along one of the most beautiful roads in Australia – the Great Ocean Road. But we had to ride along a freeway to get there, which in hindsight was a good way to see how these bikes handle at top speeds. I chose the Trail from the line-up of bikes – only because I prefer the scrambler look with its high pipes. The Trail sits a little bit higher than the 800 model, and you can notice a slight difference when it comes to cornering with its higher centre of gravity.

Straight away, I felt comfortable on the highway with loads of torque and power at my disposal to overtake the multitudes of massive trucks on this busy highway. Both bikes don’t have much of a fairing; even though the Trail has a small shield, it’s not big enough to provide any wind protection at high speeds. The upright riding position is perfect for longer rides and for guys like me who have lower back issues and can’t be hunched over on crotch rockets for extended periods without seeing a chiropractor afterwards.

Riding the bike on the freeway at over 110 kph (70 mph), I was surprised by how smooth it felt. There are some vibrations over 6000 rpm, where you mainly feel it through the bars and tank area, but overall, it rides well and sounds even better. The high-mounted dual exhaust made a beautiful throaty bark as I twisted the throttle.

After eating up many miles on the freeway we finally make it down to the Great Ocean Road. As it says on the tin, it is a great road along an ocean with many twisties and the perfect place to start to get a feel for the Leoncino. With its Pirelli Scorpion Rally STR tyres, the Trail version felt very capable riding around corners, packing plenty of grip for a dual sport tyre.

We then took a right turn off the Great Ocean Road and headed down a little sandy dirt track. This was the first time riding the bike on soft sand and the Trail version handled really well. The dual-sport tyres came into their own with more grip and I felt I could ride this little lion with loads of confidence off-road.

After stopping for photos and having a bite to eat at a cafe in Lorne, we were encouraged to swap bikes so we all got a chance to ride both models. I ended up swapping with another journo. As I soon found out, this turned out to be a rookie move. You see, there were only a certain number of Trail versions and I decided to take one early on the highway and twisty parts of the ride. Now I was swapping the scrambler Trail for the 800 street version just as we were about to ride along the off-road part of the ride.

We hit the dirt, and things started to get interesting. The Trail clearly would have been better suited to these unsealed roads, having a larger 19-inch wheel and higher ground clearance compared to the 800 I was actually on. Despite this, the 800 still felt fairly capable, and after getting a feel for the bike it really didn’t feel that much different. The road version has Pirelli MT60RS tyres, which weren’t too bad on dirt – but obviously not as good as the Scorpion’s.

After riding across the dirt for what seemed like an hour at high speeds, we eventually came to a single trail that was off the dirt track. There were a couple of random guys unloading brand new KTM enduro bikes off their trailers getting ready to ride this trail while we’re pulling up on street bikes. “Surely we’re not taking these down there?” I thought to myself. “We will destroy these bikes.” Next minute the group all heads down this sandy single track, and so I follow with a little bit of hesitation.

Then I came around the corner to see a substantial water crossing. Most of the riders had already crossed, so I didn’t see how deep the water was or what lines they took. There was only one thing to do: pin it and hope for the best. As I hit the water I realised that it was a lot deeper than I thought and most of the engine went under water, and after coming out the other side I was completely drenched like the rest of the guys. The bikes were still running, albeit splattering water out of the radiator and exhaust.

The brakes never sounded the same after the water crossing – making a squeaking sound whenever they were used. Both models use a Brembo double 320 mm diameter semi-floating disc on the front and a four-piston radial-mount monoblock calliper, and a 260 mm diameter disc on the back with a double-piston calliper. The 17” aluminium alloy tubeless spoked rims mount 120/70-17 and 180/55-17 tyres. The Trail has the larger front 19” front spoked tubeless rims with Pirelli Scorpion Rally STR tyres. The tank on both models have a solid 15L capacity and sits pretty on the frame.

The suspension on both are Benelli branded units. Reading the international press release on the bikes, I was expecting them to have Marzocchi front forks, but it looks like the Australian model comes with house units. The front forks are seriously chunky upside-down forks with 50mm diameter legs, adjustable in rebound, compression and preload with a 140 mm of travel. On the back there is a central adjustable monoshock. The suspension was a little soft, which was good for the off-road riding section but could have been stiffer for the twisties.

When it comes to the TFT display screen, it has a great interface that has a very functional design. It’s a really decent size, which reminds me of the Indian FTR display, and I happened to have the same issue with the both of them: if you wear polarised glasses while you’re riding, then the screen is pretty much completely black. Not sure why, but it’s very annoying and can be dangerous when you can’t read how fast you are going.

The Leoncino comes in three distinctly rugged and earthy colour options: Rock Grey, Terrain Brown, and Forest Green. They almost sound like the colour range for the latest Land Rover Defender or something. My favourite was the Forest Green, it just looks so damn good – it also complemented my green Rev It! jacket perfectly (sorry, shameless plug).

Overall I was impressed with the build quality of the bike, considering how we pushed the bike further than most people would using this motorcycle. The Leoncino is definitely not a ‘Lemoncino’ and I think Benelli knew this or they wouldn’t have let us abuse them the way we did.

For the price point it looks great value, and I think design-wise the Trail is my pick of the bunch – I’m a sucker for a high mounted scrambler pipe. The Leoncino 800 Trail is $13,990 AUS ride away, which seems very reasonable, and I can see why they are already becoming one of the best-selling naked bikes in Italy. After the hell we put the bikes through, I’m surprised to say that the only thing that broke was the licence plate holder – and it’s probably the first thing I’d replace if I owned one anyway.