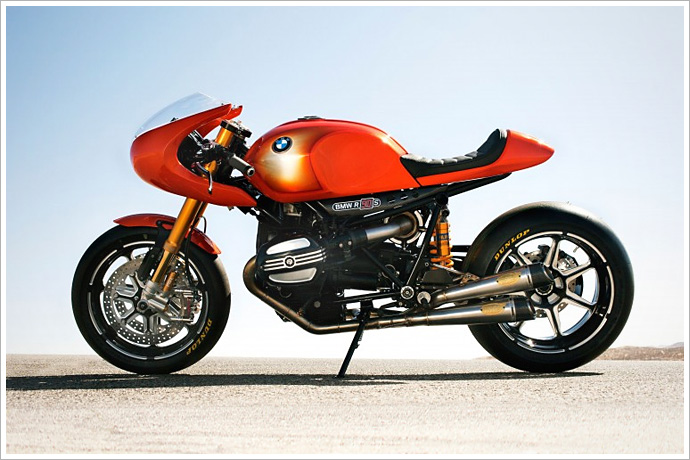 When a bike manufacturer commissions a special edition bike to be built outside of their factory, they don’t just put their creation in the hands of any nuff nuff who can swing an angle grinder and crimp terminals together. As part of this new trend to work with outside customisers, Yamaha approached Wrenchmonkees, Triumph went to Icon, and now BMW has collaborated with Roland Sands to create a homage to the BMW R90S – the German marque’s bad ass bike of the 1970’s. Forty years after it’s launch, BMW & Roland Sands have reimagined the R90S in a modern vein, while still retaining such touches as the blended paint job, ducktail and bikini fairing the original bike was renowned for. The spirit of the original is retained, with some awesome new design ideas thrown into the mix, making it clear that BMW has chosen the right bike builder for the job. Visually, the bike is striking. The upper components are painted up in bright Daytona orange as a nod to the original bike. The lower end is splashed with black, R90S badging and othe aluminium hand crafted highlights breaking up the dark visual effect. An LED headlamp, wrapped in a bikini fairing envelops a two gauge meter cluster, RSD clip-ons and levers. The custom tail end is a healthy mix of Moto2 & café racer ducktail, with the paintjob blended from the psychedelic orange of the Daytona paintjob through to a white stripe running up the centre, adorned with a BMW badge. Roland Sands has crafted a lot of the componentry inhouse, but the most standout aspects are RSD wheels wrapped in Dunlop rubber making up the rolling stock. With a café racer styled aesthetique, the Beemer features an almost wedge shaped outline when viewed from the right angle. It features tank cutouts to grip your knees against when testing the flat twin to it’s full capability, and according to BMW’s press release, ‘an attack stance like a sprinter about to explode into action’. The BMW R90s concepts first public outing is to be at the Villa d’este Concorso Eleganza, generally a car based event but this year with the R90S in attendance, more attention will be given to the motorcycle class. 40 years after the original R90S was released, this collaboration could be the start of something beautiful. A lot of people are asking if BMW could be using the concept as a gauge of public reception, to make a special run of bikes a la Paul Smart LE1000. With no technical specs released, if the bike was to go into production it would have to be able to live up to the name, reminding everyone of what bike it was that won the first AMA superbike championship, and an amazing homage to the bike that broke the mindset that BMW only made good touring bikes.