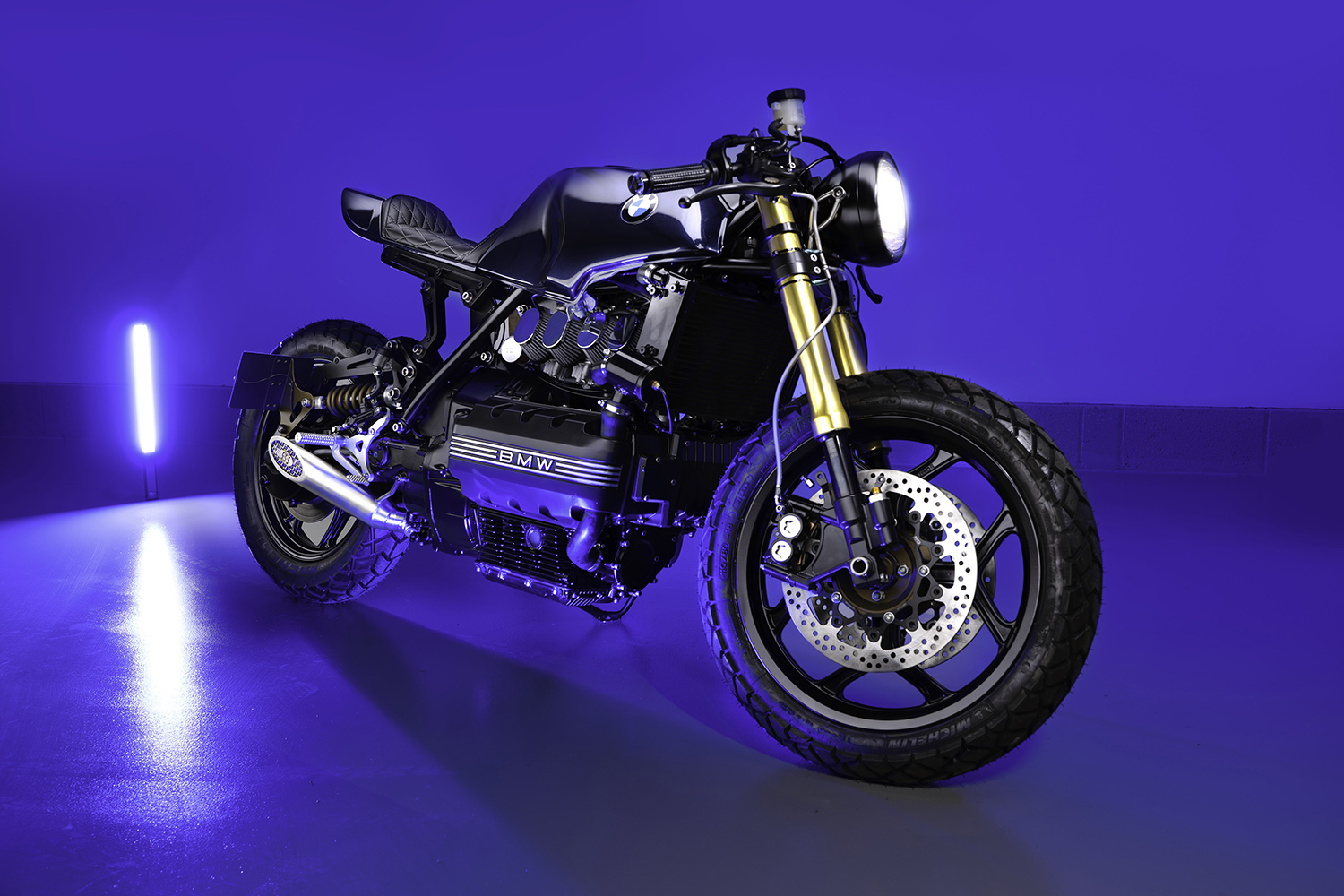 Building bikes to such a level that you’re invited to display at the biggest show in the United Kingdom takes serious skill but building a brand that’s just as successful at the same time, that takes genius. Luckily, Tommo and Dav from Spitfire Speed Shop have both in spades and as their apparel line continues to fly off the shelves, in true Spitfire style, they have never taken their eye off the fact that killer customs are at the core of their business. So having built one super slick BMW K100, the crowd literally begged for more, and willing to take on the challenge they set about trying to go above and beyond perfection. Introducing Projekt K2, the Emperor is back with new clothes and like the brand, it’s cut from the finest cloth.

The shark mouth logo of SSS is the first thing to catch your eye, part psychological warfare, part fighter pilot self-expression, it adorned numerous aircraft in the early part of the 20th century. Then there is the Spitfire name, the plane designed by R. J. Mitchell that powered by a 1500hp Merlin engine dominated the Battle of Britain and instilled hope and pride across a beleaguered nation. This all draws you in and whets the appetite for the Speed Shop element, that doesn’t fail to live up to the hype and delivers the sort of custom cool bikes to match the company’s range of apparel. Cleverly ensuring that while we can’t all have one of the bikes, we can at least look the part in the gear.

But it’s the bike we’re here to talk about and Tommo explains how it came to be, “After the creation of Projekt K and the release of the bike at our winter show on the cobbled streets of Kensington at London Morgan, the interest to build another was too high to refuse.” So on the hunt for another donor the boys struck gold, “The bike had been used as a summer commuter and extremely well looked after. We were so lucky to find such an example only a stone’s throw away from our workshop.”

With help from their friends at MRSracing, a plan of attack was plotted, and a design drawn up. “Something new was needed to be done and the bike needed to look more impressive and cleaner. The appearance was to be as simple as possible, anything un-needed gone and everything on show immaculate.” It certainly is that and starting at the pointy end of the bike, a complete Yamaha R1 front end has been adapted to fit the BMW with a custom set of aluminium triple trees. But before it was bolted on it was rebuilt to perfection, from brand new brakes to re-dipped forks, it has it all.

The rear end is the same as their last K creation, this time with the suspension centring around a new YSS product for the K100 using a half air, half oil shock. From the mounts to the linkages, allowing the shock to run horizontally, there is an absolute beauty in the functional parts being on full display and creating a form that gives the old bike some serious modern technology. Above, the subframe is made in the same style and ensures an ultra-clean look that is only further enhanced by the custom electronics box that sits below the seat.

On top sits one of Spitfire’s picture-perfect tail units, the pinched sides offering a neat match to the knee dents of the tank and the slim profile allowing the suspension modifications to take centre stage. Then there is a generously padded seat, with the upholstery going up the tail and tank for extra comfort and finished in a heavy diamond pattern stitch. Before it was time for the painter to work his magic, the photos struggling to do justice to the finished result with its double silver stripes. “The paintwork is outrageous. It needs to be seen with the naked eye to truly be appreciated.”

The frame, swingarm, and wheels have all been painted or powder-coated, those stock wheels wrapped up in aggressive Michelin rubber. The new number plate holder, shock and engine all get finished out in cerakote and the parts that are thirty years old, look brand new. Speaking of the engine, to simplify things the fuel injection is gone and, in its place goes a bank of Mikuni carbs. Requiring a host of custom parts it’s not a job for the faint-hearted, but the stripped-down look and equally smooth running were worth the time. With the handmade exhaust system letting the fully rebuilt engine truly come to life.

“The electrics are completely hidden and simplified with the help of a full Motogadget wiring loom.” That is then complemented with a flush fit speedo and lights in the top triple, Motogadget switchgear and grips, and a Domino throttle. To finish out the build a traditional front headlight from the legends at Cognito Moto gets the job done in style.

It’s another home run for Spitfire Speed Shop, maintaining a level of quality that started with build 001 and simply hasn’t let up. With Projekt K2 finished and someone no doubt keen to order number 3, a new Honda on the way, and an expanding apparel empire, the boys with the shark mouth are a fearsome proposition.