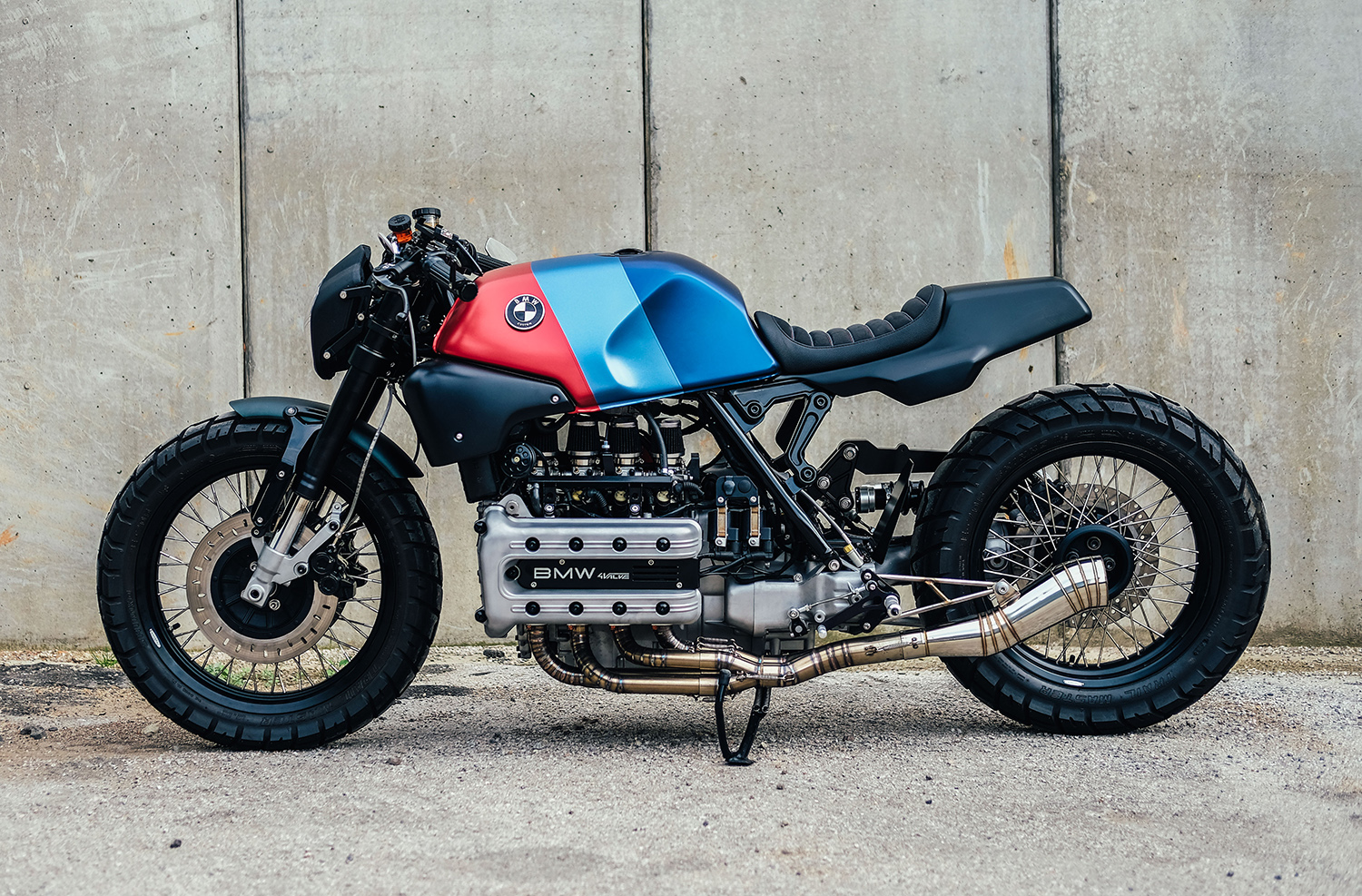 I used to love walking through scrap yards picking through old rusted wrecks, trying to find that one needed part in amongst acres of metal. But truth be told, you often ended up going home with a bunch of junk you didn’t need and without the one thing you were truly after. Well, the internet has changed all of that and made the world our parts finder, and despite being on the other side of the world, with just a few clicks, businesses like Cafe4Racer can have parts on the way to my back door. So to show off their wares The Slovak Republic based business turns out some pretty damn cool bikes, their latest, this beautiful Bavarian big block in the BMW Motorsport signature colour scheme.

Truth be told, when someone mentions the BMW Motorsport colours of Blue, Purple and Red, I tend to summon to my mind images of an old 2002, maybe an E30 M3 or the M1 Procar of Nelson Piquet. But with the launch of the new M1000RR, the famous logo has come to the two wheeled versions of the brand with all the extra goodness that entails. In this creation by the Cafe4Racer.eu shop, Radomir Petro allows us to imagine what might have been if the M magic wand had been waved over the bikes 30 years ago with this cool as can be 1991 K100RS.

Having been in business since 2015, the company has an enormous catalogue of parts at its disposal, with a special focus on BMW bits. The first of which is the horizontal shock conversion, which combines machined billet supports with a YSS shock designed for the job. Having sold plenty of the kits to others, Radomir knows them well and set the bike up so that the support, shock, and swingarm all run perfectly horizontal to the ground. To beef up the rear braking he then added a caliper from an 1150GS and attention could turn to the front of the bike. There a set of Yamaha USD R1 forks have been slotted in with a slick upper triple clamp. But not before they were rebuilt with the big dollar F20 Matris fork cartridge kit for insanely good handling.

Keen observers will notice the clever front brake combo that allows for a set of BMW spoked hubs to be laced up to blacked-out rims and then they’re wrapped up in aggressive Shinko E705 Trail Master tyres. The rubber helps to set the mood and the bodywork begins at the front with a BMW R nineT front fender mounted onto a set of 3D printed ABS supports. Above the UB1 headlight combo gives the bike a street fighter sensibility thanks to the Highsider brackets and Urban headlight, the cowling for which brilliantly picks up the lines of the factory tank.

The big K fuel tank has been left relatively standard, apart from a smooth out of the metal, custom badges and a race filler. Then over the top goes the M Sport colour package laid down in a matte finish, which allows the hues to make their point without being stupidly over the top. A set of printed radiator covers gives the whole bike some extra bulk on its already big frame and it was time to find the right tailpiece. Looking through his stock, Radomir knew the perfect part, from his fellow European, JVB Moto.

Their racer rear end has been featured on a host of their own bikes and its pumped sides help to pick up the lines of the broad tank. It’s a trick-looking piece of kit and pre fab’d to accept a recessed LED tail light just makes it that much more appealing. But it could never have been mounted to the stock subframe, so a RetroRides CNC cut subframe was swapped into place and they make for a very pretty pair. Over the top, a generously padded and perfectly stitched seat was added into place and below a rear hugger was mounted to the swingarm.

Of course, you can’t build a K bike and not spend some time on that silky smooth engine and Radomir first got it performing at its best and cleaned up a treat. On the intake side the quad individual throttle bodies have been adapted to run vertically, while on the other side of the cylinder head, the exhaust begins by flowing in the exact opposite direction. This further use of precise symmetry is a theme across the build and the stainless system with ultra neat hanger ends in a GP-style muffler. The mounts for which run from the bolt in location for the race like BSK rearsets.

Yet it is only when they’re illuminated that you noticed bolted to those very racy rearsets are the mo.blaze tens1 turn signals. This is the beginning of a Motogadget fiesta, as the K cops a full rewire based around the m-unit Blue. An m.lock and motoscope mini are also part of the cocktail and take instructions from the backlit RebelMoto switch blocks. New clip-ons, radial master cylinders, and JVB Moto front turn signals help to finish out the build.

It’s one hell of a bike, built with parts that are all available from the Cafe4Racer online store. But this is not just a catalogue dump, it’s just that in assembling his excellent inventory, Radomir has ensured that modified M motorcycles can be built with bits all from the one place.