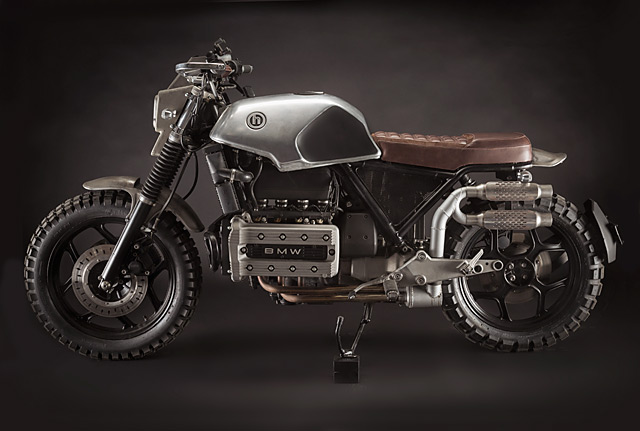 The relationship between client and creator is always a tricky one. Just ask any designer; their customers always want a game-changing creation for nix, and they usually want it yesterday. But great work always takes time. Time, and the patronage of someone who understands that the bike builder might actually know more about, you know, building bikes. When this happens, art often follows. Art like this, for instance; the latest and dare we say greatest from Kentucky’s best custom bike builder, Scott Halbleib of H Garage. Moonlighting as a bartender to get some time outside of the workshop paid off for Scott in off more ways than one. Enter ‘Coop’, a regular drinker for the past 6 months or so who, after a few vodkas one evening, said he’d like to get himself another motorcycle. We’re guessing someone like Scott could probably help him out with that. “A couple more vodkas, some discussions on makes and models and he leaves telling me to see if I could find him something,” says Scott. “Two days later I emailed him an Ebay ad for a fairly rough K100. 3 days later it was being shipped.” Scott’s not typically inclined to do commissioned builds – mainly because he says he always feel constrained by budget, but times are tough and Coop seemed like a good guy who, unlike most, understood that building a solid, bespoke custom bike is no cheap or simple process. In the end, Scott was up for the challenge and Coop was on board. After a brief test ride on dry rotted tires and with a handy self-detaching mirror, Scott took it back to the shop and stripped it down. “I was hoping I could convince Coop that, while we would most likely go over budget, I really wanted to do a little more with it. A dual-sport headlight shroud, an engine guard, some high pipes and a rear hugger would make for a nice build. And one that I would be willing to badge with the h garage emblem, too. Luckily, he agreed.”

The first big task on the list was the headlight shroud. Scott had an idea in his head, but he wasn’t sure where he’d seen it before. “At first I thought it was an old GS design, but now it seems a little closer to an old KLR.” A headlight from an FT500 and some posterboard mock-ups gave Scott the basic shape was looking for. He then formed the frames out of 1/4″ round bar and welded on the panels. The ‘windscreen’ is a separate piece that can be removed; four fork clamps attach the shroud to bike.

Two fenders were sourced; the rear unit was chopped and welded to the frame, while the front was shortened and channeled. A slimline, arched LED taillight was then built into the underside of the new dirt catcher. Rectangular aluminium turn signals we also added while Scott was down there.

“Things seem so easy on paper,” Scott laments. “In this case, it was the hugger. New units were very expensive, but a friend suggested we try one from a Ducati Multistrada, which turned out to be half the price of the unit from a BMW GS.” It was an easy decision, but mounting it to a cast aluminum housing was a hell of a lot harder. After much faffing about, Scott decided to use the brake caliper mount and the shock mount as anchor points, with a tabbed band running around the wheel housing that secures the actual hugger. Can’t you just imagine the cussing? Next, the exhaust. Cue a pesky little clutch arm that extended directly into the path of the new mid-pipe section. It was slotted, then turned, then welded to a custom-bent 1 1/2″ section which then attaches to two Emgo mufflers with some pretty fancy heat shields.

“After a long search, an aftermarket ATV guard I found on Ebay looked like it had potential to work with the build. Once it arrived, I realized I would have to mod the cross-bar to allow it to fit. I designed a bracket on the computer and sent to Metal Supermarket to be plasma cut and bent accordingly.” One of Coop’s requirements was to be able to haul around the occasionally lady friend. Scott chopped the frame as much as possible while leaving just enough room for an extra set of moneymakers and then fabbed up a seat pan out of multiple pieces of metal. Then, with the tire selection made beforehand, he wanted to match up the ‘tread’ pattern on the seat. “I measured and laid out a few patterns on the computer, but ultimately Ginger at New Church Moto worked her usual magic.”

Other miscellaneous niceties include fork gaiters up front, a RAM Xmount for phone & speedo duties, a push-button ignition switch, Moose handguards, low-rise dirtbike bars, a pair of mesh side panels and some low slung, non-detachable mirrors. All told the project took a little over three months, which isn’t bad considering there was another build happening and the aforementioned bartending gig to deal with. “It’s meaty, raw and the exhaust note matches the look. We went 70% over budget, but it’s good to have a client that shares your vision and realizes that time is money. It’s renewed my interest to take on commission. Bring ’em on.”