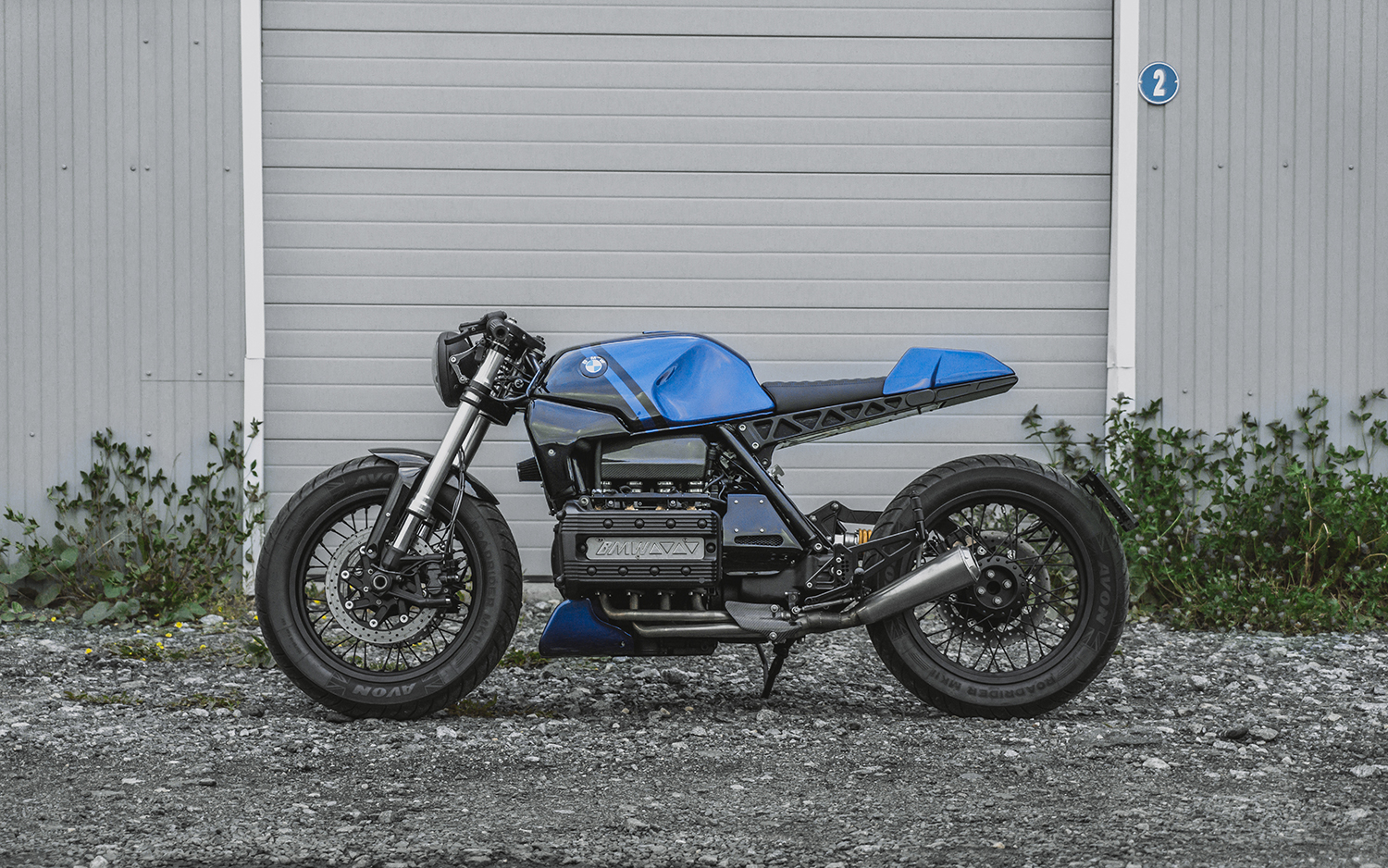 A downturn in the global economy can be a scary time for a custom builder, motorcycles might be essentials for many of us, but with less spare cash in the back pocket, lashing out on a new build might not be possible. The last time we checked in with Nikolai of Motoizevro and Leonid Skakunov of Drive-In Workshop, they’d come to share a workspace to reduce overheads as the financial crunch set in. But rather than it be a negative, it’s been anything but, with the two now able to work separately and yet combine their skills to produce some incredible results. The latest machine to emerge from behind the roller door is this incredible 1990 BMW K100, that seeks to perfect the ‘flying brick’ in every single way.

Three decades on from when this machine rolled off the line at the German plant, it is easy to forget just how ahead of its time the K really was. Very few other motorcycles used full electronic control of both fuel and ignition, let alone sported ABS braking. The car-like engine was and is incredibly reliable, so too the drivetrain and basic maintenance meant trouble-free motoring that far exceeded anything else on the road. But weight and the suspension were never ideal and well, let’s just say the styling hasn’t aged well either, so it would be in these departments that the greatest efforts would be spent.

The ’90 model donor was far from complete when it arrived in the workshop, the lads tell us there was only about “half” a BMW there. But this wasn’t a concern, as even aspects of a build most would never bother themselves with, were going to come in for customisation. Having previously built a horizontal rear shock setup for a K, the guys decided to refine the approach further, and reduce the setup down to its absolute necessities. Based on a fully adjustable 300mm shock, the progressive linkage has a new mount off the back of the frame, and the rest of the components are machined to tie it all into the swingarm.

But it was always the front suspension that let the K down, not having the dampening control to deal with all of that weight. So the obvious choice is to go big and beefy and a set of Showa USD fork legs from a modern Kawasaki were chosen. To get the geometry spot on, the factory BMW steering stem has been retained and is clamped between a custom set of triple trees that were designed and machined for the job. It’s only in small increments at this stage, but the use of billet alloy over steel begins to bring the overall weight down.

With most K builds sticking with the stock wheels or shifting to later model BMW items, the decision was made to go for a left-field approach. But when nothing in the aftermarket really blows the wind up your skirt, you really only have one choice; design and make your own! A set of custom hubs has been machined, no easy task for the shaft drive rear, and then each end is laced up to black rims with 36 individual spokes a piece. On a bike this complex, one change usually throws up at least one more problem to solve, and an offset BMW GS rear caliper was required with a new rear disc to clear the new wheels.

The front would prove to be even more of a challenge, but this was partly by design, with the desire to rid the bike of the very heavy factory ABS setup. It would be easy to just stick with conventional braking, but where is the fun in that. So, a whole new control unit and associated ABS parts were taken from a more modern Honda, new front discs had to be designed and constructed to work with the radial calipers, and then a Suzuki ABS sensor was adopted as it is the smallest they could find. The controller, a new battery, and the computer are then hidden in the space between the tank and the subframe.

The factory tank remains for the classic K look, but a completely modular rear subframe, tail, and seat assembly has been designed and fabricated. The design not only looks incredibly cool but is very functional! There is an internal locking mechanism so that the seat itself can be removed, and this then exposes twin compartments, one for the aforementioned electronics, and another to store your wallet, gloves, and phone. To help balance the visual weight of the bike, a lower pan has been added, before the black and blue seat was matched by the always brilliant paintwork of @octopus_art_aerografia.

The engine wasn’t going to miss out either, and with more weight saving in mind, the airbox and a host of heat shielding, and panels have been replaced by hand-finished carbon fibre parts. A small filter allows the air to run down an induction tube, and the increased airbox capacity ensures the 1000cc motor is never out of breath. On the exit side, a four-into-one stainless system spits flames out of a Leo Vince muffler. And everything from the rearsets, to the levers, perches, and switch blocks have been custom built for the bike.

It seems even in a crunch, the guys are making the most of things, and as advanced as the K was in 1990, the Drive-in/Motoizevro custom is better in every single way.