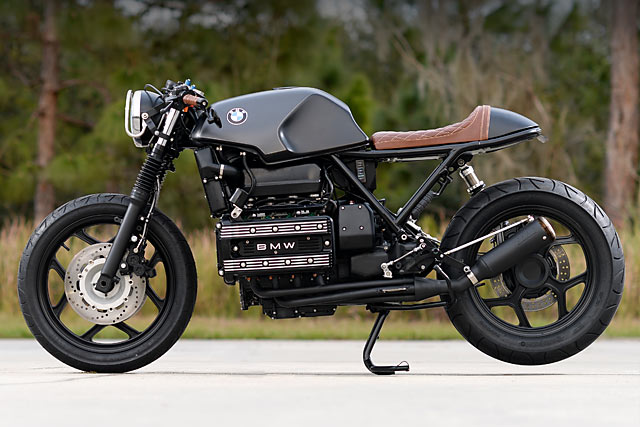 You don’t have know Hageman MC to recognise their work. Seen those Virago cafe racers? Greg Hageman helped create that look. Oogled the Yamaha SCR950 Scrambler? That was a shameless riff on his builds. His work is clinically excellent and his influence on the scene is profound – he’s like a motorcycling Bono, but without being an insufferable dickhead. This time around he’s tackled his first BMW, a 1983 K100RS. And he wasn’t confident it would come out looking this good. The customer for the cafe’d BMW was on a tight budget, which worried Greg a little. “Having never worked on a K bike I had no idea what the cost of parts and labor would be,” he says. “So it was a gamble to build one.” And things didn’t bode well the first time he laid eyes on the donor bike. “I wasn’t sure if it was the best platform for a build,” Greg says.“It looked so bulky and heavy, it looked mammoth even with the bodywork off.” It wasn’t just the size of the bike that presented problems. In standard trim the BMW doesn’t have the right stance for a cafe conversion. “The lines of the bike weren’t the greatest. The forks were way too long and the bike sat high in front and low in the rear.” [superquote]“It tucks the nose of the bike down and offers complete suspension control, including more rebound options than a dumped freshman cheerleader.”[/superquote]

So Greg scoured Craigslist and haggled out a ‘98 Yamaha R6 front end. It serves two purposes – it tucks the nose of the bike down and offers complete suspension control, including more rebound options than a dumped freshman cheerleader. At the rear, Greg fitted a specially made Hagon shock, 20mm higher than standard. Rounding out the stance is a new frame from the tank rearwards, which mounts a seat from Nevada company Tuffside. Prior to delivery the K100 had already been serviced. But Greg went over the whole thing, replacing every rubber component on the bike. It also received new 4 hole Bosch injectors, plugs, a thermostat and cables. Along with the frame, most engine parts were powdercoated satin black, which makes that 975cc blacked-out stressed member really stress my member. Members of the K-series fanklub will notice that the big autobahn bomber still has a centre stand and lifting handle, and they’ll be nodding quietly into their steins. When leaning over on it’s side stand the big ol’ K leaks oil through the rings causing it to dump a big belch of smoke on startup. “Unless you work for some mosquito pest control company, I recommend parking on the center stand,” Greg says. The biggest challenge provided by the K100 was it’s overly-complicated wiring. “I’m pretty sure somewhere in the world the letters BMW stand for ‘Way Over Complicated and For No Reason,” Greg says. “Connecting the aftermarket gauge nearly required an electronic engineering degree.” But after much head scratching and tracing of wires everything was made to work flawlessly. Things were much easier when it came to the Tarozzi mounted switchgear and lever assemblies. “I decided to keep the standard controls and refurbish them. These are built so much better than any I’ve seen before. You can tell they were made to last”. Completing the hunched-over stance are BSR rear sets, which tuck the rider down behind a 7” headlight with blinding H4 bulb and traditional-style guard. All that hard work paid off in the end, with Greg surprised by the way the slab-sided K went around corners. “It actually handles very, very well,” he says. And that big inline four has a surprising amount of torque “Other than a lot of vibration around 2,000RPM it revs high and smooth… I was easily able to bring the front end up.” Greg Hageman has created another custom motorcycle that not only looks good, but handles like hell. And this time it was all done on a budget. Well, sort of. All that electrical head-scratching slowed the build down. “In the end I blew way past the budget in both parts cost and labour,” he says. But looking at that big slab-sided cafe racer I think it’s all worth it.