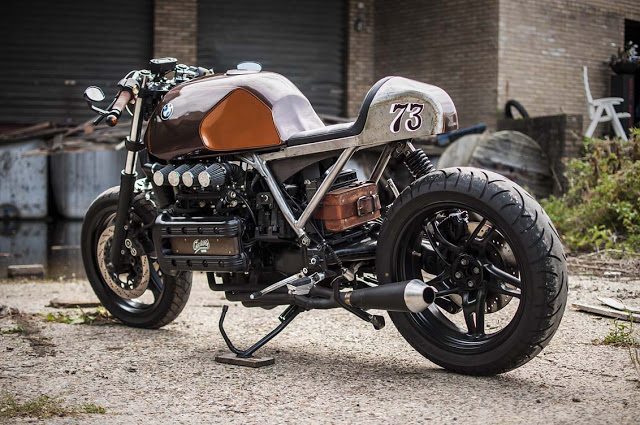 “Breaker one, Breaker one, I might be crazy but I ain’t dumb, Craaaazy Cooter comin’ atcha, come on.” Growing up watching the Dukes of Hazzard with his friends, Eric Kalter was given the nickname of the wild mechanic Crazy Cooter from the hit show and although he might not be a mechanic you’d never know from what he’s achieved with this stunning 1994 K1100rs. Many would argue you’d have to be crazy to pick a “flying brick” to turn into a stripped down custom machine, but although he is a service manager in the printing industry by day when the shed lights come on Eric becomes one hell of a builder under the moniker Cooter’s Café. If there is an argument to be made against turning a K series BMW into a Café Racer it’s the weight, the K1100RS is a big ole girl at 268 kg fully fuelled but that didn’t put Eric off and he has done more than a few things to get that figure well down! Instant weight saving is achieved by ditching all of the fairings that covered almost the entire bike. The bulky instrument cluster is gone, so too the huge two up seat and the rear fender, its accessories and heavy metal supports. To shorten the bike overall and further remove more weight the subframe was cut off at its mounting points and a new item fabricated and welded in its place. The frame was then smoothed out and detabbed and left in a raw metal finish that beautifully contrasts with the low slung blacked out engine that works as a stressed member. The choice of aluminium for the seat makes perfect sense in the quest to keep weight low and it hugs the frame with hot rod quality fabrication. While much of the seat remains in raw metal the café hump is treated to some tank matching paint work and number decals for that racing look all of which is laid down by Eric himself. The slim line seat is finished in a diagonally stitched leather and topped with the Cooter’s Café logo all done by Miller Kustom Upholstery. The tank mounts have been modified and lowered at both front and back so that the lines are more befitting of a café racer. The tank itself has been extended at the front, raised 2cm, before Eric generously coated it in a vintage style two-tone brown paint scheme with small BMW logos added to the curved steel with exceptional skill. There are four cylinder motorcycles and then there are the BMW horizontal four’s that leave the high revving superbikes to do their thing and instead focus on punching out obscene amounts of torque. At 2000rpm the big four is already making 75% of its torque and just continues to pull like a freight train to redline. To improve fuelling, Eric has installed the injection system from a K1200 that utilises the common Bosch Motronic ECU. Feeding air to the system are the four menacing chromed pod filters poking out the left side of the bike with the air sensors neatly relocated. The big rear cans known to dominate most BMW’s from the factory has been ditched and saving weight and sounding mean is the new shorty reverse cone muffler in its place. With such a unique engine that dominates the look of the bike Eric chose not to ignore its aesthetics or try and hide it in anyway. Rather it takes centre stage and shows off its bulk thanks to an all-black paint job that further accentuates its size. For a neat custom touch the spark plug cover is hardwood and finished with hot rod style lettering to spell out the Cooter’s Café logo. The catalytic converter has been removed to clean up the look further and the installation of a Li-Ion battery reduces weight and adds reliability. The final touch to the engine area is the beautiful ‘50s leather bag that keeps the battery company, once used as a safe bag for small businesses it’s now the perfect place for Eric’s wallet and phone. To get the stance right and further lower the centre of gravity, a vital handling change with a big horizontal engine, Eric lowered the standard 43mm front forks with a brace replacing the fender. The rear of course is one of BMW’s brilliant Monolever swinging arms and with a full face of a wheel to show off a visual more appearing R1150 item replaces the standard fare. BMW didn’t skimp on the braking either and Eric had no need to mess around with the already superb 305mm twin drilled disc front and 285mm drilled single disc rear. The factory switch blocks have been mounted to a set of chrome clips that have neatly wrapped leather grips for more of that vintage look and feel. The front indicators are mounted to the end of the bars while the rear is kept minimalist with a small taillight mounted above the numberplate holder. While Eric still has plans for the bike – a new mount for the rear muffler for one – to truly appreciate what he has accomplished you have to look at the way a standard K series 1100RS appears in factory form. It’s one of the last bikes you would ever pick to be converted into a café racer but Eric’s a mad genius and even his name sake Crazy Cooter would have to concede this is a hell of a machine for fleeing Sheriff Rosco and running rings around big Boss Hogg.