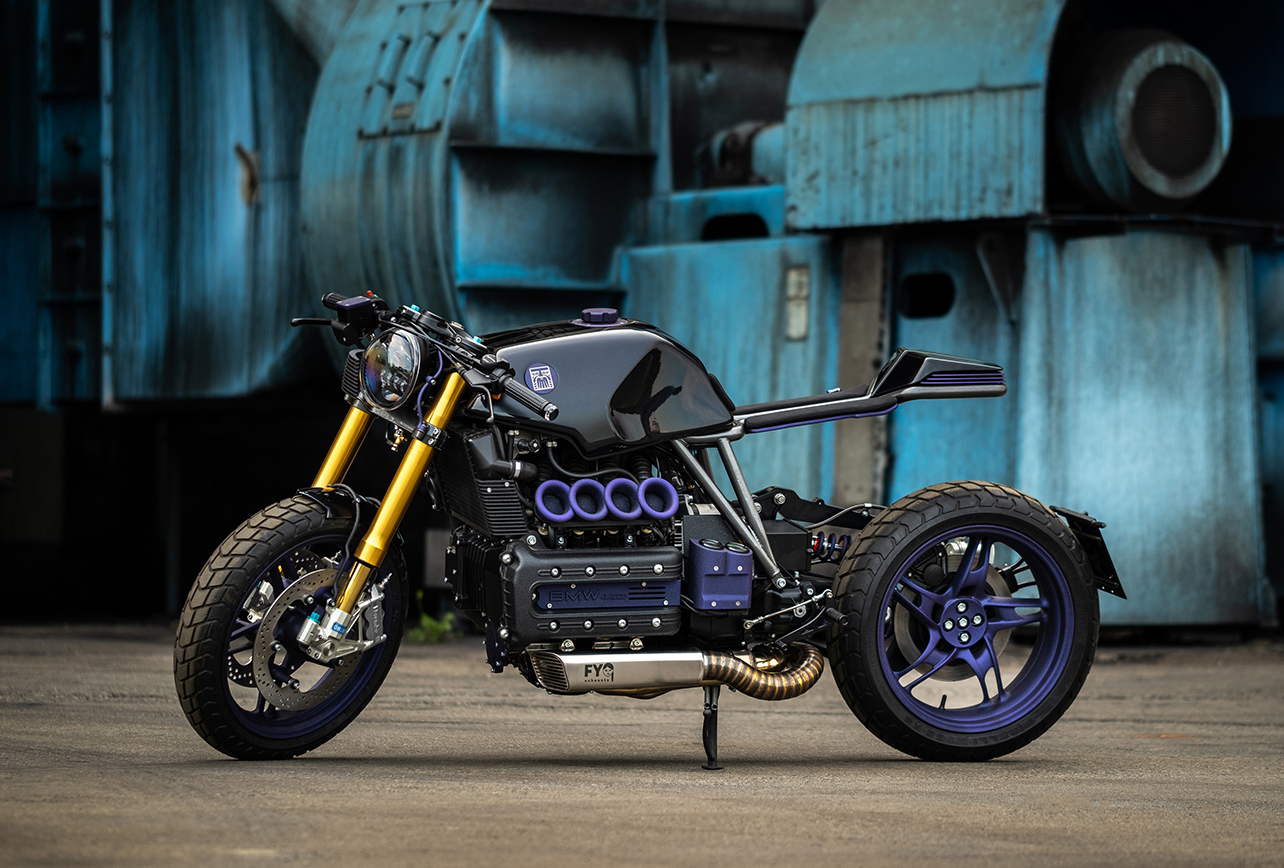 You have to hand it to BMW’s motorcycle division, they just don’t do things like the rest of the pack and have always done engineering their own way. From supercharged twin-cam engines in the ’30s to hulking big straight-six transverse-mounted donks on their modern tourers; they can’t help but do things a little differently. In the custom world their most ‘conventional’ bikes still feature a unique boxer twin, but hot on the heels of the R series bikes of late, comes the weird and wonderful flying brick. And few have been built as brilliantly as Incerum Customs’ latest K-Bike creation from Croatia.

Having been on the scene for the past decade, Incerum have built themselves a reputation for ultra-clean designs. But they don’t just play it safe, as lead man Antonio Ferhatović also has a flair for the dramatic and uses bold colours to help show off his handy work. His most recent build, this BMW K1100 RS, is perhaps the most understated work he’s done in a while, but that purple just catches the eye from every angle and there are a host of clever touches to keep the owner entertained.

All of which is well and good, but the bike itself has to perform perfectly in every single way for Antonio to be happy and this bike is no exception. Starting with the stock motorcycle it was stripped down till the last washer was left spinning on the floor and a plan of attack was hatched. Knowing he wanted to go with a unique subframe and mono-shock conversion, Antonio started drawing up the design. The K bikes are no lightweight machines, so to ensure there was more than enough rigidity, the new subframe features a twin-centre post construction.

Even the rear hoop comes in for some extra thought before the new steel tube structure was coated in a hard-wearing dark silver. To get the bike rolling the back of the machine was to stay the focus, and parts from a BMW K1200RS, including the wheel, were plucked and give that stunning open look on the single-sided swingarm. The bike is then converted to a lay down horizontal shock setup, with a machined alloy support arm finished in black and a YSS shock to handle dampening duties. Here the first splash of purple is supplied with the spring finished in the crinkle-cut hue.

The front end had to be a serious piece of kit to match and with the weight of the bike in mind, the over-engineered Ohlins forks and triple trees from an Aprilia RSV Mille were adapted to fit. It’s no simple bolt-on job, but not only do you get a high quality suspension but the radial Brembo brakes make for a hell of an addition too. The wheels were painted purple and then wrapped in Pirelli rubber. While up on the bars is a host of new components to ensure the rider is well catered for and then Antonio put together a set of custom rearsets to complete the controls.

Moving to the bodywork and the factory fuel tank was modified to work with the new forks and a custom filler cap was welded into place. The tail unit begins the futuristic feel and beneath the twin bodywork sections are a trio of metal slats. It is a design element that is added to other areas of the bike, but in the rear and painted in purple, it gives the LED lights a sinister feel. The seat too is straight from the Sci-Fi realm, with the frame running down the middle and twin pads on the perimeter.

“We custom made a glass container for the cooling liquid,” which is of course finished in purple. So too is the custom steel housing that fits over the coils and holds the temperature and fuel gauges. There are almost too many detailed pieces to mention, but study the bike long enough and to your delight, they keep appearing. One thing you can’t miss however is that thumping four-cylinder engine. And from the crinkle black paint to those triumphant purple velocity stacks and the state-of-the-art exhaust system with FYG muffler; it is truly a feast for the eyes.

Did we mention that the stainless exhaust, that’s perfectly TIG welded, also vents to the front of the bike? It’s cool stuff. The wiring is something that Antonio takes great pride in and to match his custom made loom he chose parts from Motogadget and Kellermann to finish the job. Finally, the paint could be laid down and nothing goes with purple like black. But rather than a single look, both gloss and matte finishes were applied and a tyre mark graphic also graces the tank. Just like BMW, they do things outside the box at Incerum Customs, and for all its crazy creativity this K-bike creation is also one hell of a fast cruiser.