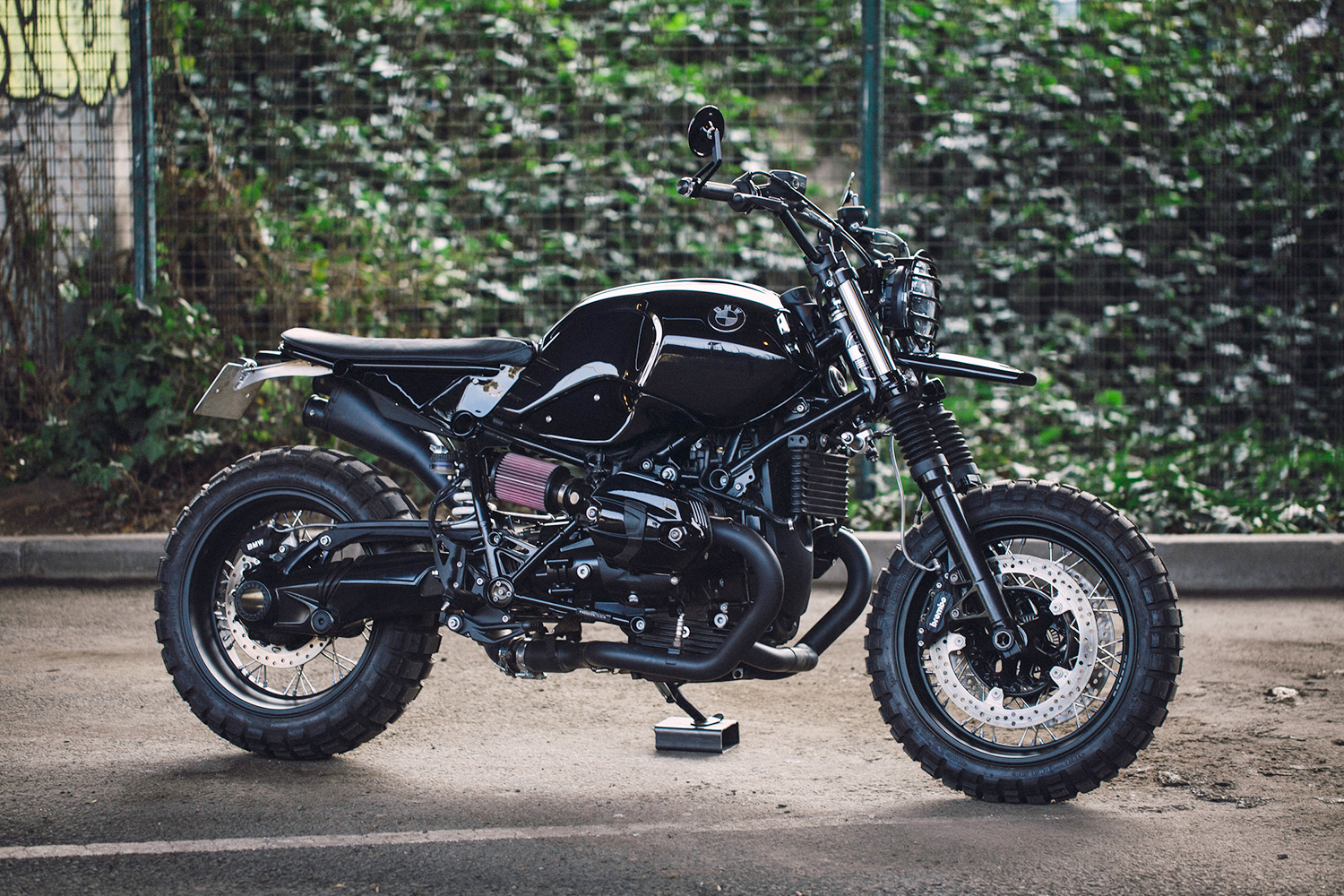 The philosopher Mick Jagger once proclaimed to the world: “No colors anymore I want them to turn black”. These legendary lyrics by the Rolling Stones pretty much became the brief for Zombie Gelato’s latest BMW R nineT commission. “The client wanted as much as possible to be black,” says Chris Martin from Zombie Gelato. Being their client’s first motorcycle, he also wanted it to have all the bells and whistles. What started life as a stock 2017 R nineT ‘Pure’ in matte black ended up leaving their Belfast workshop as a murdered-out street tracker with multiple layers of contrasting black paint, packed with the latest technology and custom parts.

The R nineT has been one of BMW’s most successful bikes of the last decade. Part of its success is the fact that it gives custom bike builders a high quality blank canvas – and this specific canvas would be black. “Originally he wanted a matte black bike,” explains Chris. “But I convinced him that it would be ugly and hard to live with, so we settled on metallic black on the body work and a range of matte, satin and gloss on the rest of the bike, giving contrast across the bike.” First, they had to remove all the parts that were going to be painted in black, sending them to Landspeed Auto House, and they used a metallic black on the body work to highlight the lines and satin cerakote on the exhaust and foot controls.

To give the bike a modern dirt bike feel, a custom subframe was constructed with design nods to the nineT frame. They also hand-shaped aluminium side panels, which were flared out towards the rear of the bike for a motocross look. In keeping with the tracker vibe, a high front mudguard made from aluminium was used, along with the matching rear mudguard. The front mudguard was mounted above the bottom yoke along with the headlight, which was contained in a custom cage to allow it to sit close to the neck. Fastec Racing made the perfect top yoke to fit the scrambler front end and a Motoscope Pro completed the cockpit.

To open up the airflow to the engine, the air-box was replaced with K&N filters and a discreet cover panel was fabricated using aluminium to match the flow of the tank. This allowed the frame to be opened up and the controversial charcoal fuel filter to be removed, reducing the visual weight of the bike.

The stock handlebars were swapped out for some tracker-styled units, streamlined by replacing the standard switch gear and gauges with Motogadget units. This required some help from an electronics expert, Thomas, at ‘Dev Moto’ in Marseille. Using his custom CALIN module allowed the push buttons to work with the ECU and the Motoscope Pro; this is pretty much just a plug-and-play adaptor and is straightforward to install.

To finish the bike off, the stock seat was ditched for an eye-popping custom seat which was fastidiously finished by Holy Goat Motorcycle Seats. The seat gurus worked their magic using black suede in the centre, leather on the outside and white diamond stitching.

The end result is a tricked out and blacked out Beemer that is ready to hit the streets of Belfast and beyond. “It’s just the second modern bike I’ve done,” says Chris. “So, it’s nice not to have to restore and make the thing run before getting to the customisation.”