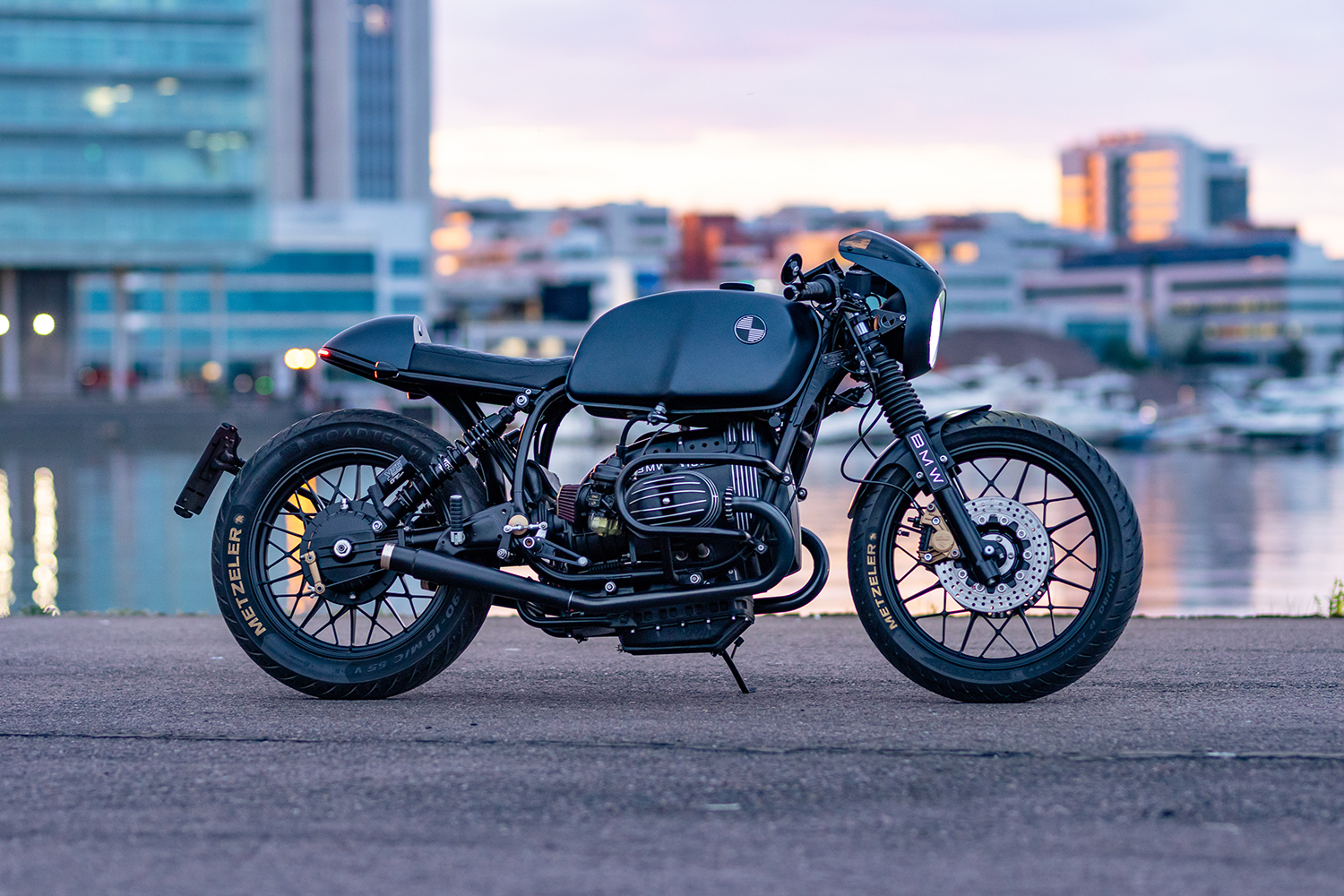 When you’ve been immersed in a subculture for what feels like a lifetime, you quickly forget that by its very nature few people on the outside will ever really understand what it’s all about. But nothing reminds you more vividly as to why you’re in so deep than to witness the joy and overt passion of a newcomer. Welcome Finland’s Tito Toivola to the world of custom motorcycles; a man who just over a year ago had never heard of a café racer. Now he’s gone and built his very own beauty, a stunning 1978 BMW R100/7 with all the trimmings. The fog has finally lifted, and Dark Shadow Garage has stepped into the light.

It was at the Motorcycle Fair of Helsinki in January 2020 that Tito, walking amongst the many machines, spotted a BMW R nineT. His friend turned to him and explained, “This is what café racer Style is. Before that statement, I’d never heard of it, let alone knew anything about it, but the spark had ignited,” Tito smiles. So as soon as he returned home, he fired up his computer, typed the term into Google and spent days browsing, admiring and learning everything he could about the style of bike we’ve all come to know and love. Then Covid-19 hit, and like so many, he thought a period of lockdown would make for the perfect time to roll up his sleeves.

Hunting for a BMW R of the older variety, he soon discovered the pain that so many know, their price has risen to ridiculous amounts. So, he put the call out on the internet and soon had a message from a man with just such a bike at a reasonable price. Only one problem, Tito couldn’t get to the bike because of lockdown, but eager to secure the machine, he paid the price and waited for lockdown to end to take delivery. He was rewarded with this US import ’78 R100, which needed a little work but could be ridden while he built up a good supply of parts before attempting a full build.

But as they often do, things snowballed and a simple carby overhaul revealed other issues that needed addressing. But when I say Tito had been bitten by the bug, I mean the biggest bloody cockroach you’ve ever seen. He wasn’t going to be deterred and started buying tools to fill his garage, parts for the bike and learning everything he could about every part of motorcycle maintenance and customisation. His Brother, witnessing what was going on had some sage advice, set a budget, and then multiply it by three, set a timetable and multiply that by two. Tito laughs now, knowing how accurate his brother’s predictions would prove to be.

He was determined to stick to a true Cafe Racer in his build and follow the 2+1 rule, “That’s two main colours and one accent colour.” Now the build could begin! The bike was totally stripped, and every last component pulled apart until all that was left was the engine case and the final drive. The frame and other pieces went out for blasting and Tito focused on cleaning up the smaller parts in his newly acquired blast cabinet. Then checking out that final drive he realised it was stuffed and couldn’t find a replacement 2.91 gear. But as luck would have it a 2.75 gear from a race bike was available in Germany and with Covid rules lifted a little, it was into the car and returning to his home with a bounty of Bavarian goodies.

The rear end was rebuilt, then the gearbox, Tito learning at every step, and then onto a full engine build. Being a US model, it had low compression pistons, but having come home with a full powerkit from Siebenrock, the engine was treated to new slugs, rings, gaskets and just about everything you can possibly name. The rebuilt carbs score a set of DNA pod filters and clear fuel bowls. With the exhaust a stunning custom set of pipes, with small baffled mufflers. The engine was all painted by Tito and the finish is out of this world.

This began his journey of learning to paint each part, baking it at home and then adding a colour accent or file finish. Following his initial rule, the two main colours used across the bike are a BMW Black, Frozen Arctic Grey and a natural Gold. For his first time on a paint gun the quality is superb, only requiring some small help from Autoväri Vuori. From the re-worked factory tank with the custom badging to the overhauled front forks, brake calipers, fenders and everything in between, it looks like new. Sticking with the true Cafe Racer style; he’s added a front cowl, a sweet custom tail unit and then had the seat diamond stitched for a stylish finish.

Having come this far there was no way the factory wiring could stay in place and so a flick through the Motogadget catalogue had a host of parts on the way. The brains of it all are of course the genius m.Unit and utilising Bluetooth, a smartphone now acts as the instrument cluster with an infinite array of displays, data feedback and trickery all at the rider’s fingertips. Custom rearsets, adjustable YSS shocks and gold-lettered Metzeler tyres are just some of the additions to the build that has seen this BMW touched in all the right places.

Starting an Instagram page to document the process, Tito already has a host of people lining up to take advantage of his obvious skill, and the BMW Cafe Racer known as Dark Shadow has launched a new career for this talented newcomer to our culture.