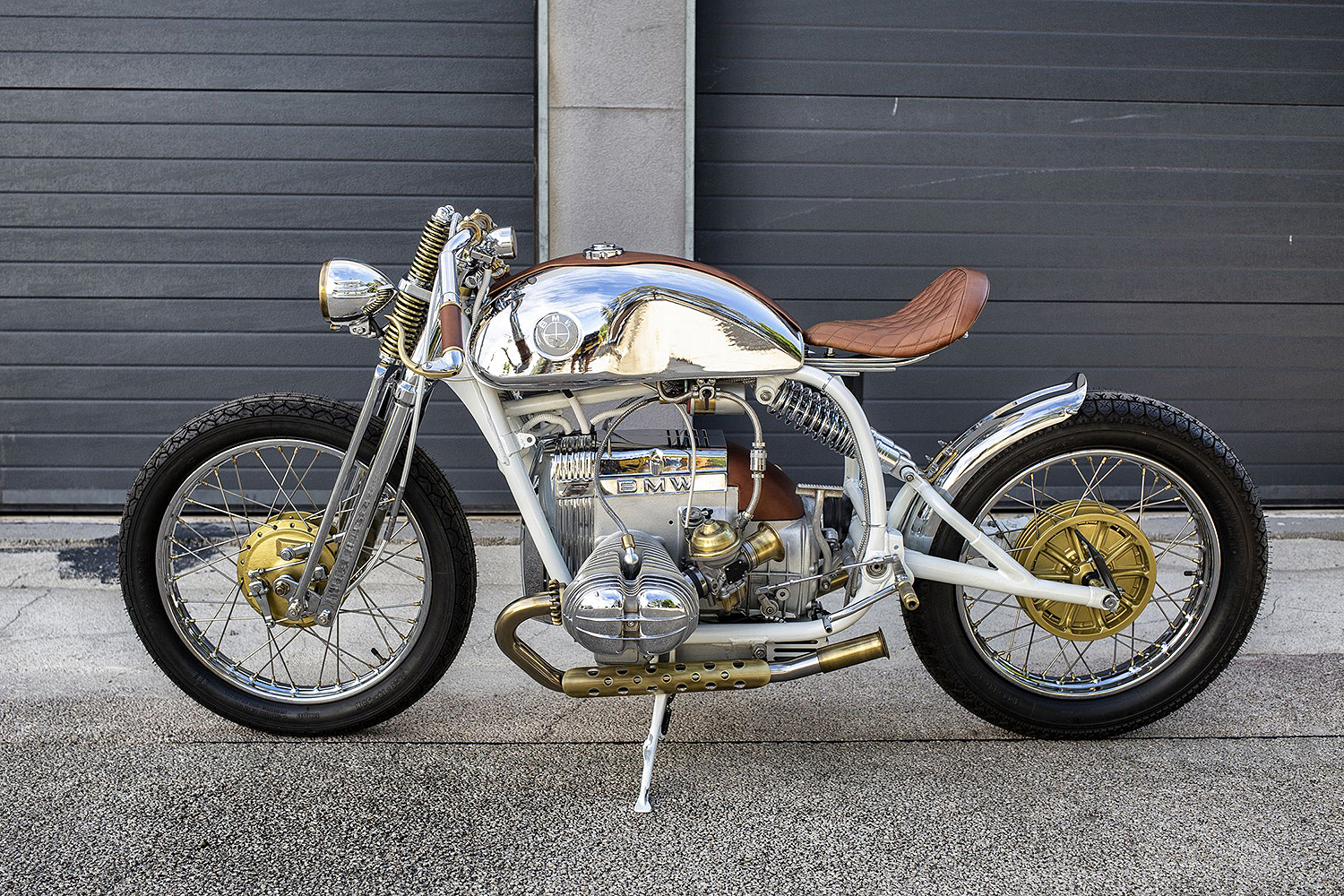 If there is a discernible trend in the custom scene at the moment, it’s not any particular style of bike taking off or a major model in favour, but the shift of large workshops towards developing their own limited production run machines. The success of this approach has been undeniable but it often results in more conservative builds to capture the eye of more than one client. Well, Lord Drake Kustoms has joined the party but as usual they sure aren’t conservative, with head honcho Fran Manen throwing convention to the wall and opting for a non conforming a la David Bowie style of motorcycle. And they’re already running out the door, with his BMW R100 ‘Survivor’ range finding homes around the globe.

It was at the beginning of 2020 that Fran began to seriously consider a full production run of bikes, having built more one-off customs than most people have had hot dinners, it was the challenge he needed. With workshops in Spain and Miami, Florida, it was the European winter that had his creative mind ticking over. But the decision was made to head to his Miami facility to build the bikes. Then Covid-19 hit and rather than give up on the dream, he hunkered down in his Málaga facility and launched into work.

“The idea was to create a piece of art on two wheels and above all a custom BMW R that had not been seen to date. It is well known to all lovers of the world of custom motorcycles, that the BMW R100 series are possibly the most demanded and customized cafe racer motorcycles in recent years, but if you look at the end, they all have the same patterns…,” Lord Drake tells us. So what better way to instantly switch things up than to piece together the perfect Springer front end for the builds.

With a bare R100 frame in front of him, Fran began the process of adapting an existing springer design to work with the German chassis. With a tendency to either hoist the headstock into the air or tighten up the rake to an obscenely acute angle, LDK’s own unit allows the lower link to hold the axle an inch out from the front strut. But not content with the already radical new design, the decision was made to convert a drum brake hub as well, to give the entire forward half of the bike a truly mechanical aesthetic.

This meant the vertical twin factory shocks at the rear were always going to look way too conventional and the creative fluids got flowing again. What LDK came up with was the obvious decision to go with a mono-shock styled rear, but to utilise twin centralised shocks in the process. Based on a standard swingarm, the BMW steel has been converted with perfectly welded round stock for the twin-mono conversion and a new mount was added to the main frame to accept the top eye of the blinged-out shocks. A BMW drum rear in place and the roller was taking on serious shape.

The aesthetic approach of the design would again gender-bend styles and it starts with the very Cafe Racer like reproduction Benelli Mojave fuel tank. This too has been modified in house to not only sit over the completely different backbone of the BMW, but to extend rearward to exactly where Fran wanted the all-important tank/seat junction to be. That seat is definitely in true Bobber style, but the way it’s supported is a little stroke of genius, no hard-mounted central post or twin springs here; but a custom and chromed out leaf spring support.

The diamond-stitched traditional leather pops hard against the generous use of chrome and polished metal across the bike. With the leather running up and over the tank in a vintage strap style and the same hide used to wrap the grips. These sit on a set of seriously cool bars that take on a board tracker vibe and the old school brass finished inverted levers with the cables running through the tubes deliver a clean as can be look. That vintage brass finish extends to the front ring of the small headlight, the details on the custom pegs , and a host of other components.

Many of which take pride of place on the all-important Boxer twin that lays at the heart of the build. A custom set of individual pipes gives the burble out the back, with hand-made heat shields and a set of machined velocity stack matching trumpets on the end. Even the Bing carbs get the brass treatment and the rear cover of the engine has been finished, like we’ve never seen before, in leather. The wiring runs through braided lines to match the chrome and finally the 19in front and 18in rear rim ensure a very low and level machine.

So has this wild creation found fans? You better believe it, with the first three sold to clients on three separate continents and LDK is fast on its way to having the entire globe covered.