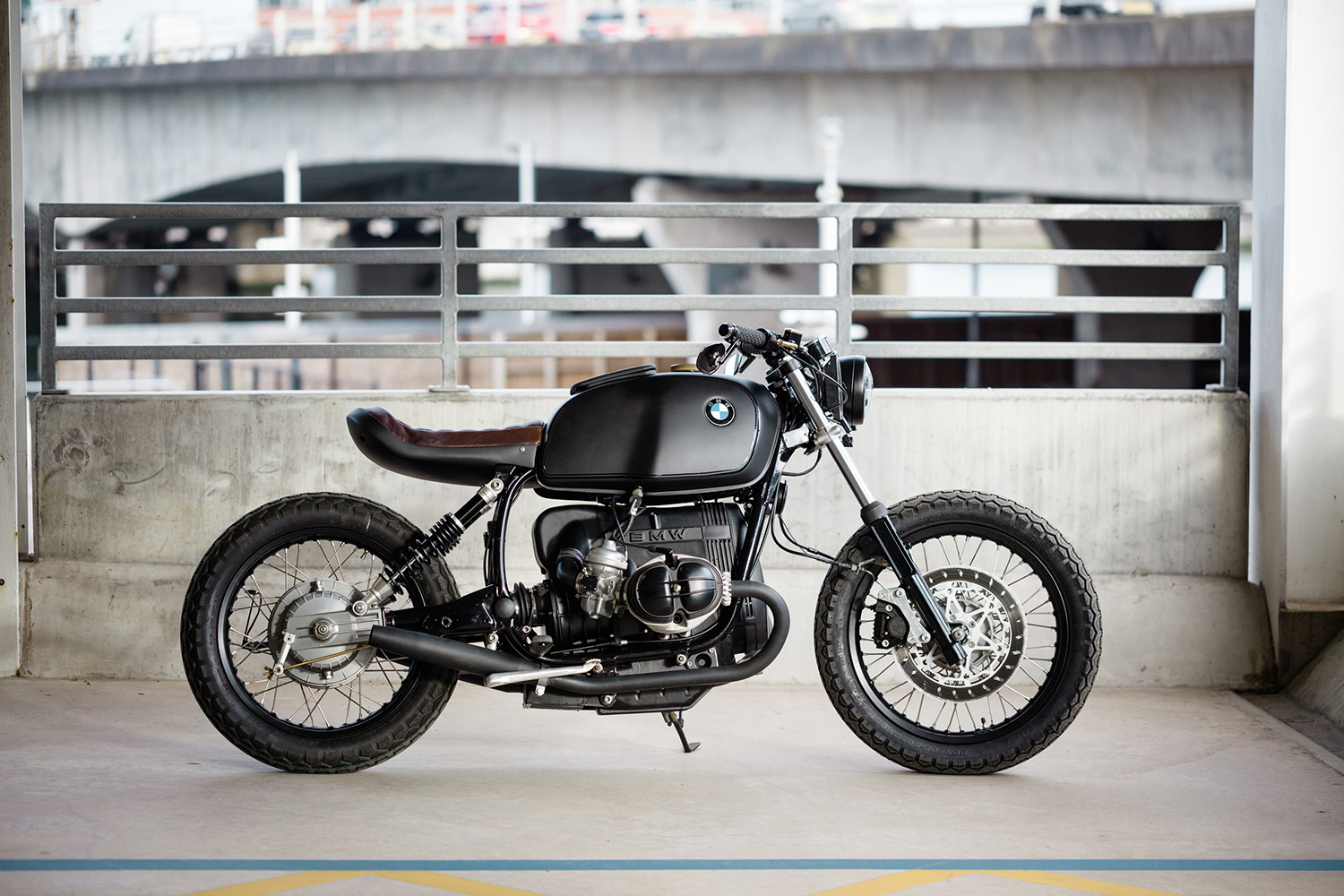 Assumption, they say is “the Mother of all F@#k Ups!” These and other great lines can be found in the nearly, but not quite, Oscar-worthy movie Under Siege 2 with Steven Seagal. Terrible films aside, one of the great assumptions made about the brilliant custom bikes we feature is that the donor motorcycle must have been in great condition to begin with and the cosmetics are all it takes. Dealing with old bikes, nothing could be further from the truth, and Chris Martin of Belfast’s Zombie Gelato takes us behind the scenes. Revealing the struggles to get this glorious 1982 BMW R100 operational before he could make it stand out from the pack.

“This bike was built for Anthony a long-standing figure in the Belfast hospitality and drinks industry. He came to us with a very specific build in mind, a R100, flat black bobber with spoked wheels and upgraded brake discs,” Chris explains. But even in bike mad Northern Ireland, the supply of good condition R100s has all but dried up, and sourcing a donor proved to be the first major hurdle. Then Chris got word of a bike he was told would work well for the project, and that despite its snowflake wheels, everything else was A-ok.

“The reality however was that the bike was in a much worse state than anticipated, but knowing everything was going to get blown apart and redone or replaced we’d take the risk, which turned out to be quite an extensive list.” With the bike stripped down Chris could see some of the problems but more would be revealed. First, the BMW had to be converted to spoked rims and a set from eBay was sourced, blasted and the rims finished in black before they were laced to a hub with stainless spokes. A new rear drive had to be sourced from the US, but “the drive spline was so worn it would require replacement with a new spline from Motoren-Israel being welded onto the bevel gear.”

With the wheels taken care of the brake package was next and more parts were sourced from Germany’s BMW experts, Motoren-Israel. The 320mm discs provide massive stopping power, but with the kit designed for a R80G/S, a new set of caliper brackets had to be fabricated by a local engineering firm so that everything would line up. The rebuilt forks get the front end handling as it should, with the back end now running a pair of adjustable coil-over shocks to soak up the bumps and allow Chris to dial the bike in for the new owner. With those new spoked rims wrapped up in classic Dunlop rubber, the roller was in perfect shape.

“Wanting a floating seat but not being a fan of the saddle-style seat just stuck out the back of the tank, we fabricated a subframe to mount the M unit Blue and house the seat. We shaped an aluminium tail cowl to wrap around the subframe for a sleek look, then the brake and indicator lights were recessed into the backside of the cowl.” It provides for a slick-looking finish, with nothing left exposed in any direction. Over the top, the seat unit itself was generously padded for a comfortable ride and then Kev at Holy Goat Custom Seats stitched up the vintage leather to perfection.

“From the start Anthony wanted asymmetric headlights, we didn’t want to weigh up the front of the bike too much and when we found the long-running light from Shin Yo we knew it would be cool mounted vertically beside the halo of the headlight; along with a couple more miniature spotlights make sure everyone will see you coming any time of the day.” The fuel tank was next on the list and having been restored to perfection and given a brass filler cap, the paint was expertly handled by Noel @landspeedautohouse. Laying down the gloss black, then masking it off for the pinstripe, before shooting the satin black over the top!

“Everything was painted or powder-coated black; engine, frame, forks, swing arm, tail cowl or was supplied black, even Cerakoted the exhausts black, we did keep the heads raw though, often as the hottest part of the engine they peel and they line up nicely with the freshly vapour blasted carbs,” Chris tells us. All of which allows for that iconic Boxer twin to really take centre stage and with the carbs left to draw air through the standard box, it’s neat as can be. Starting that engine is just as fun, the Rebel Moto steering stem nut with illuminated push button a clever party trick.

You can turn the bike off with the same button, thanks to Chris taking full advantage of the Motogadget m.unit’s keyless go. “The handlebars and controls were a labour of love, squeezing all the wiring for the Rebel Moto switches, Motogadget mini gauge, Motogadget bar end indicators, and the moto sign mini took quite a bit of patience but the final minimal look is pretty rewarding when you are out on the bike.” An extra hint of brass in the form of Kustom Tech levers and lathe turned rear brake rod just add to the class.

Known as DRAGONFLY MENUKI, the owner can fit fenders when the Irish summer ends, but for now Zombie Gelato ensures he’ll stand out from the crowd on a killer BMW Bobber that not only looks good, but thanks to Chris’s tireless work ethic, runs like a dream too.