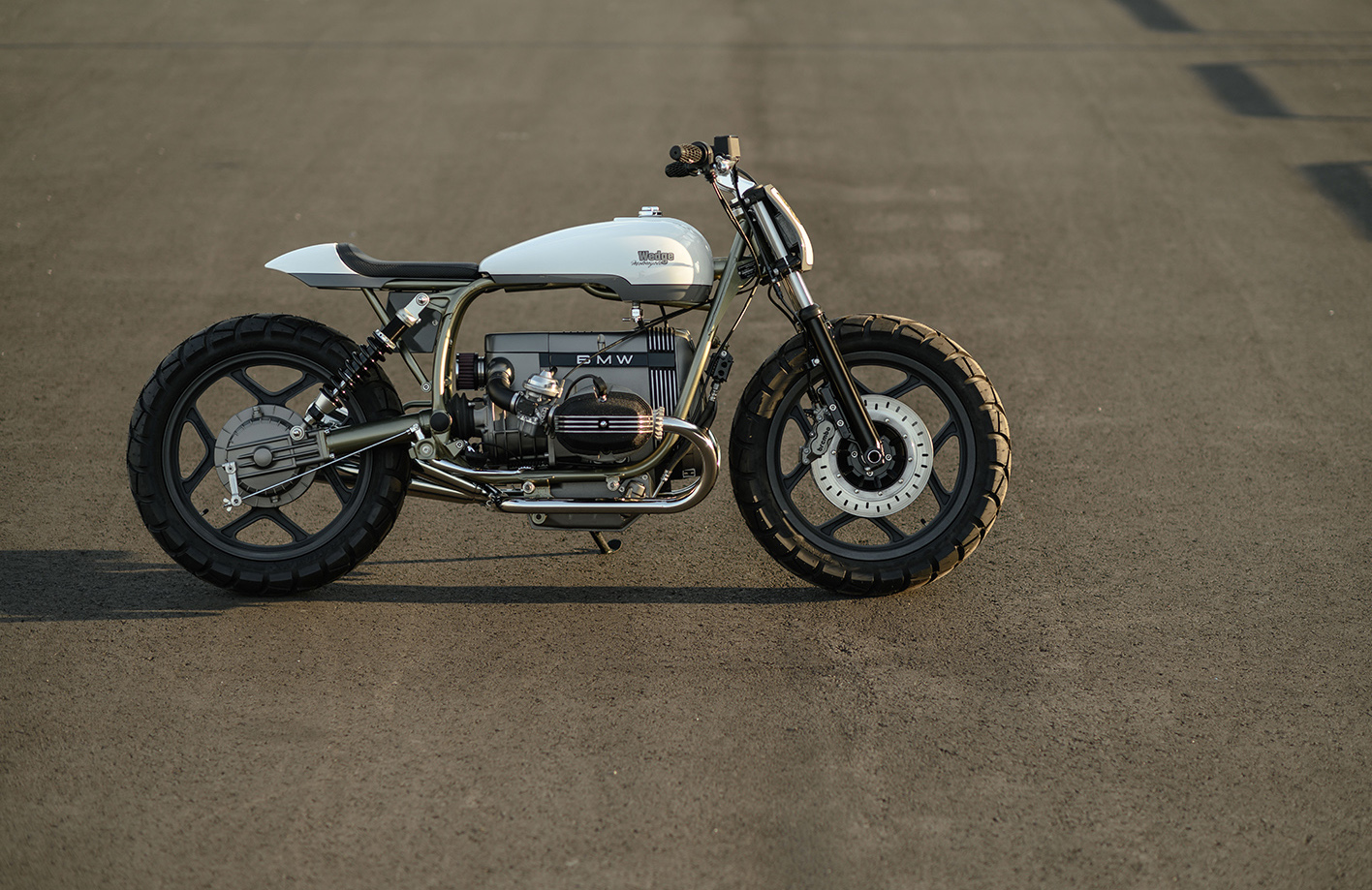 If you’ve seen the documentary series “Our Guy in Japan”, you would have witnessed the sheer childlike delight that Guy Martin had when spending time with an 83-year-old engineering grandmaster and 70-year-old master swordsmith. It’s the same giddy joy that we get at Pipeburn HQ when a bike comes in from one of Japan’s best builders, so astonished that one man can possess so much talent and skill, you simply have to smile. Deep in the suburbs of Tokyo you’ll find Wedge Motorcycle where a man that can do it all plies his trade. Takashi Nihira takes his first shot at building a BMW Boxer and like the country’s favourite pastime, he’s hit it out of the park.

“Previously, I participated in the official project of BMW Motorrad and customised the G310R. However, it is the first time I have customised flat-twin engine. So, I learned a lot about BMW in advance after I took the order. Without understanding its mechanics and the history, I can’t inflate the imagination of custom styles and details,” Nihira-san explains. Having previously worked at a car dealership where he was a mechanic, painter, and metal fabricator, there is simply nothing he can’t do. So the customer left the requests brief and allowed the the master builder to work his magic.

What they did say was they wanted a BMW R, that could be daily ridden and was fenderless. From there Nihira-san had free rein and immediately honed in on a tracker or scrambler-styled machine. With the cost of twin shock BMW R’s on Japan’s used mark being simply astronomical, the hunt was on for a cheaper mono-shock bike that would keep more money in the kitty for custom work. With the right bike acquired it was time to take it all in and the angle of the engine, sitting skew-whiff as they do in the frame was not to Nihira-san’s liking. First he tried suspension changes, but the reality was, that only pitches the backbone of the frame into an equally funky pose.

For a permanent solution, it was decided that the top half of the engine had to be modified and in doing so, also create increased space between it and the fuel tank for a less cluttered look. Putting his metal making skills to good use, Nihira-san modified the front section of the engine case and then built the top from scratch, to produce a stunning airbox and battery compartment that must have old Bavarian engineers wondering why they didn’t do it like that in the first place. Inside the engine has been given a refresh, before a K&N air filter was fitted for the re-jetted carbs and a hand-built stainless exhaust emits the boxer burble out of a set of SuperTrapp mufflers.

The bodywork is simply beautiful, there is no other way to describe it, and here Wedge’s head honcho is able to show off his years of metal work and spray painting experience. Wanting a certain look for the tank he decided to make it by hand, gaining extra capacity that was lost in reduced depth by building a wider piece that is perfectly at home above a horizontally opposed engine. Committed to giving the owner serious longevity, it’s been crafted from steel but the rest of the body would be made from lightweight aluminium.

As requested by the owner, the fenders were ditched, but the front end instantly draws your eye with a perfectly made cowl that transforms the look of the bike. While the outside is square, it is the rolled effect with a round light recessed in that helps to soften the lines, perfectly picking up the shapes from the tank. Moving rearward the tail unit is in true tracker style sitting above modified frame rails, with the alloy brilliantly shaped over the frame for a factory-like finish. Spray gun in hand the master went to work, laying down the resplendent white and grey colour combination, with ultra neat pinstripes and the perfect gold leaf numbers.

Turning his eye to the suspension, and no longer needing to use it to get the lines of the engine right, Nihira-san focussed on producing a ride that would handle a mixture of surfaces and be plush enough for longer journeys. The front forks are modified internally with new springs, with the rear receiving a model specific YSS rear shock that has been setup to suit the rider. To bring the brakes up to spec, adapters were made to affix bigger Brembo calipers to clamp the BMW discs, with a Brembo master cylinder for a better feel at the lever. Before the 18in wheels were repainted and then wrapped up in Dunlop Trailmax rubber measuring 120 wide, front and rear.

Throw a leg over the perfectly stitched seat and the cockpit that greets you is the classic minimalist vibe of the scrambles machines that Murray Walker used to call on BBC Grandstand in the ’60s. Vintage grips on a classic set of chromed out crosser bars, with matching risers and levers; its just all so well done. To add the final touch, a neat piece of metal was cut and shaped to slot in between the front cowl and top triple clamp, and now houses a Motogadget mini to feed back the vital signs to the rider.

The finished product is a master class in simplicity, craftsmanship, and a well thought out design. It’s easy to see why Nihira-san is a multiple-time award winner at the Yokohama Hot Rod Custom Show. Now we’re just going to prepare a drink and kick back on Friday to feast our eyes on Wedge Motorcycle’s latest wonder.