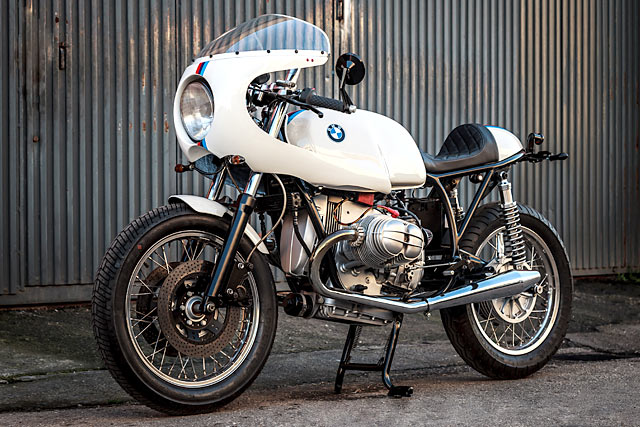 Reviving clapped-out road bikes from sheds and garages is all fine and good, but spare a thought for the old racers of years gone by. More likely to end life upside down than right-side up – and probably on fire – it’s a tough gig to survive without some serious war wounds. So when Spain’s Macco Motors had a customer bring them not one but two BMW R100RS ex-racers, they feared the worst: for the bikes, their budget and their sanity. But what’s a few broke, manically babbling customisers when you have an end result like this, a cafe racer they call the ‘Great White’. “Our customer bought us twin BMW R100s,” say the Macco boys. “He made a deal and got these two bikes that had been competing in classic races competitions for some years. The bikes had been left in a shed for four years and we had no idea what state they were in.” When Rafa, the customer, told Jose and Tito about his plan to buy these bikes and customise them to ride on Spanish streets, they were more than a little sceptical. Clearly, Rafa had fallen in love with the racing mods done to the bikes: the worked engines, R1 fronts and their overall look. “But the other one had a broken engine and this one was a completely unknown quantity. His build budget could vary wildly.” Despite their fears, Jose and Tito had always wanted to build an old BMW sporting a classic fairing, and this seemed to be the perfect bike to make it happen. Experience dictated the one sensible approach – a ground-up rebuild and resto. “Then we’d convert it to a more classic style mixed with the racing look the bike had already. This way, we could put our customer’s preferences and ours, plus the soul of the bike together in the same pot and cook it all together.” “In our experience, some bikes are much easier to build than others. This one was definitely one of the others. We began by rebuilding the engine completely. The bike was missing all the electricals at the front: there was no cables for lights and no speedo, so everything was built from zero.” Next they dealt with the bike’s unwanted racing mods. Its original tank, stand, pipes and exhausts were all missing, and in some cases even the mounting brackets had been removed. It was a similar story at the front end; pretty much everything was built from scratch, including the fairing and brackets, headlight, speedometer, brake master and hoses, controls, mirrors, grips… the list goes on and on. “Once we’d fitted the new fuel tank, a new complete subframe was welded in place and two seats were built: one with a cafe racer tail section and another plain one so Rafa could ride two-up. The engine has been tuned up, refreshed with some new carbs and air filters, and then painted silver. “We also retained the upper racing position of the engine, to which we added new standard chromed pipes and exhausts.”

Perusing their build shopping list reveals even more tasty bits. There’s some Biltwell Thruster grips, an Acewell speedo, Hagon Nitro rear suspension, two K&N filters, and some choice Metzeler Lasertec boots. “Every single part has either been replaced, restored or reworked.The result is a bike that is just pure and utter fun; it has very little in similar to the standard R100. The response of the bike and the feelings it stirs up for someone who loves these kind of classic machines is amazing.”

[superquote]“Every single part has either been replaced, restored or reworked. The result is a bike that is just pure and utter fun.”[/superquote] And what about the challenges? “The front, the electricals, the brakes… even the stand. All of this BMW was a challenge, to be honest. But when you look at the bike parked, and you see the mix between the classic and its racing look. Wow. But without a doubt, the best part is how it rides. It’s an absolute killer.”