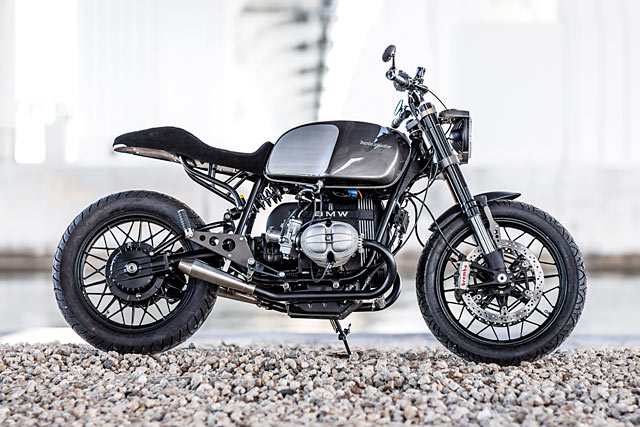 While motorcycle riders tend to prefer one brand of bike over another, it’s much trickier for custom builders to do the same. If you’re trying to put food on the table, limiting your builds to just one manufacturer will automatically rule out many potential customers who might love what you on, but maybe not the bike you do it to. So, after many years of doing mostly Moto Guzzi builds, America’s Bruce McQuiston has swapped his pasta for pork knuckle and taken a little trip to Munich. Here’s his ‘Das Moto’ BMW R100RS that’s eine kleine cafe unt eine kleine tracker. Our chat starts with Moto Studio’s Bruce in a decidedly ‘biz dev’ kind of mood. “While we continue to build bikes that are unique,” he says in opening, “Our shop is evolving in terms of production techniques and design. While cafe bikes are our true passion, clients requests have had us considering bikes with more versatile riding positions: mainly scramblers, trackers and even some supermotos.” Enter stage left a BMW with a decidedly big future ahead of it. “The build, which we call ‘Das Moto’, started life as an ’81 BMW R100RS. The objective of the build was to provide a practical platform for two-up operation, yet stay within the ‘design vocabulary’ of the previous Moto Studio builds in terms of engineering and aesthetics. The build process also sought to improve on the original bike’s performance wherever possible.”

“We wanted to create a seat that would be more sculptural than a standard bench as well as a subframe that would show it off. Redesigning the swing arm and frame to accommodate the Sachs Formula Matrix damper also lead to improved functionality as well as really cleaning up the rear of the bike.” But what about those performance boosts? We think it’s fair to say that Bruce didn’t exactly cut corners on that one, either. “To improve the platform at the front end, a set of USD forks were tweaked and mounted along with a proper set of Brembo brakes that were sourced from a Ducati 1098.” Hopefully the Ducati’s owner had finished using them. Yes, these mods do have a decidedly modern bent to them. But Bruce didn’t leave the old school touches by the side of the road. “With a nod to BMWs of the past, I decided that a really nice touch would be to mod the headlight mount so that it could also house the speedo unit.” And as with all Moto Studio builds, the electronics are sourced from German instrumentation gurus, Motogaget.

[superquote]“In its new life, this bike can be ridden aggressively and responds as required.”[/superquote]

“The Bing carburettors were replaced with a set of Dellorto PHM 40s and the ignition to the twin plugged heads is now provided by Sachse Elektronik. Both of these changes conspire to really liven this tourer up. In its new life, this bike can be ridden aggressively and responds as required. It can also handle a two-up mission around town easily.” Bruce says his favourite part of the build is the overall integration of design; from the foot peg hangers to the fender mount, the Dellortos to the shorty mufflers, everything on this cafe tracker seems to work together as if it left the factory just as you see it here. And with looks like this, don’t you kind of wish it had?