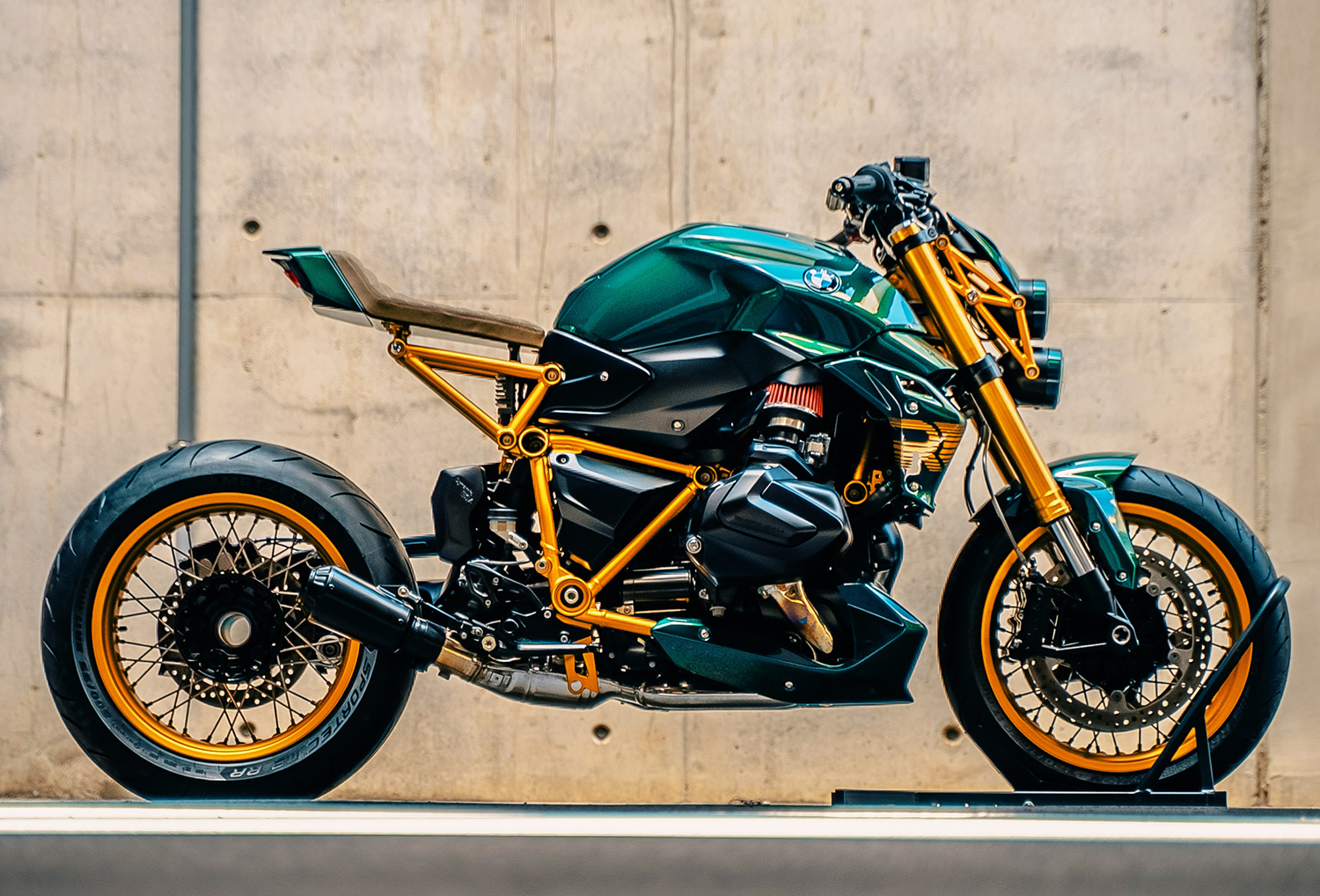 There is absolutely no doubt that BMW is one of the coolest brands in motorcycling right now, but it’s a bit of a case of the chicken or the egg. Did the fine folks in Bavaria make some smart marketing move or has the custom scenes long embrace rubbed off and primed the big German? That we may never know, but the once anorak only badge is now appearing on the most badass bikes and Tossa R has entered the fold in a big way. The boys from Bulgaria have taken a new BMW R1250R and given its excellently engineered foundation one hell of a brilliant makeover.

For those not in the know, the R1250R is a naked that is best described as a roadster, not as brutal in performance as the KTM Super Duke, but still delivering that roar power experience in a more refined package. The chassis is excellent, the ride is comfortable, the braking is superbike level and the engine is BMW’s high-tech Shift Cam Boxer twin that combines endless low down torque with serious top-end grunt. It’s just a bloody good bike, but where the KTM and other naked’s in the class deliver incredible looks straight from the factory, the BMW is well, bland.

Never fear, the team at Tossa R led by Asen Zahariev have years of customisation and racing experience and had a plan to transform the big R into a bike with the looks to match its performance. Not at all intimidated by ripping apart a new bike they had it broken down in no time and could see where the changes needed to happen. One of the major tasks is something that you don’t see and that’s by design. The CAN bus system that allows all of the electronics, different ECUs and electrical components to talk to each other is highly complex and doesn’t like any single piece of the puzzle to be disturbed.

So simplifying it all is not as easy as cutting wires and removing the bits you don’t need, but Asen has ensured all of the amazing electrical functions remain while creating a clean as can be look. This was essential with the new tailpiece that is fabricated to replicate the main design of the frame, only in a slimmed down version that sits the rider in a far more aggressive position. To complement the look a unique tailpiece was hand-formed that picks up on the lines of the tank and yet gives a dramatic visual and is all topped off with a custom stitched seat.

Moving to the front and the same philosphy has been applied, where the once bulky stock headlight has been given the flick. In its place is a trick setup that makes use of a small subframe style mount in the same design as the rear, which then supports a pair of Shin Yo projector lights to shine the path forward. Above a slimline custom cowl finishes the look and the bike takes on a sinister streetfighter vibe. To bring it all to life the main colour is taken from the BMW catalogue, Aurora Diamond Green metallic from the M8 Competition road car and combined with Gold it looks simply incredible.

Some alchemy was employed for the wheels too, but with the R1250R coming from the factory with mag style rims, first they had to be changed out. Back into the BMW catalogue and the guys found the perfect solution with a set of R nineT spoked items that not only fit but don’t interfere with any of the other gadgetry. The hubs are blacked out, stainless steel spokes laced in and then those stunning gold rims are wrapped in Metzeler’s best Sportec RR tyres. Stopping power is just as impressive with the radial-mounted Brembo calipers blacked out to fit the colour scheme.

Getting up to speed is where the big R excels and the ShiftCam technology makes this the best Boxer engine yet. Yes, it’s basically the same variable valve timing that Honda and Toyota have been using for decades, with the intake cam featuring two lobes that are placed over the valve by an actuator. So you get the right valve timing for epic torque down low and then a shift to screaming top-end power as the revs rise and the more aggressive lobe takes over. All of which can now be heard via the induction roar of the new K&N air filters the boys fitted.

On the other side of the engine, the excellent factory headers have been retained but the hulking and heavy box muffler has been sent to the bin and replaced with a lightweight and screaming Leo Vince end can. With all of the wiring having been sorted out, replacing the blinkers with small Motogadget m-Blaze Ice indicators was a breeze and really cleans up the lines. Before an all-new number holder was fashioned to sit to the side of the rear wheel and is illuminated with an LED light.

The finished product has earned itself the name the BMW R1250 Hulk Edition, and Tossa R have given it the muscle, power and physique to wear the name with pride. For sale, they’ve ensured the factory warranty is retained and suddenly the question as to why BMW is now so cool is answered in the best possible way.