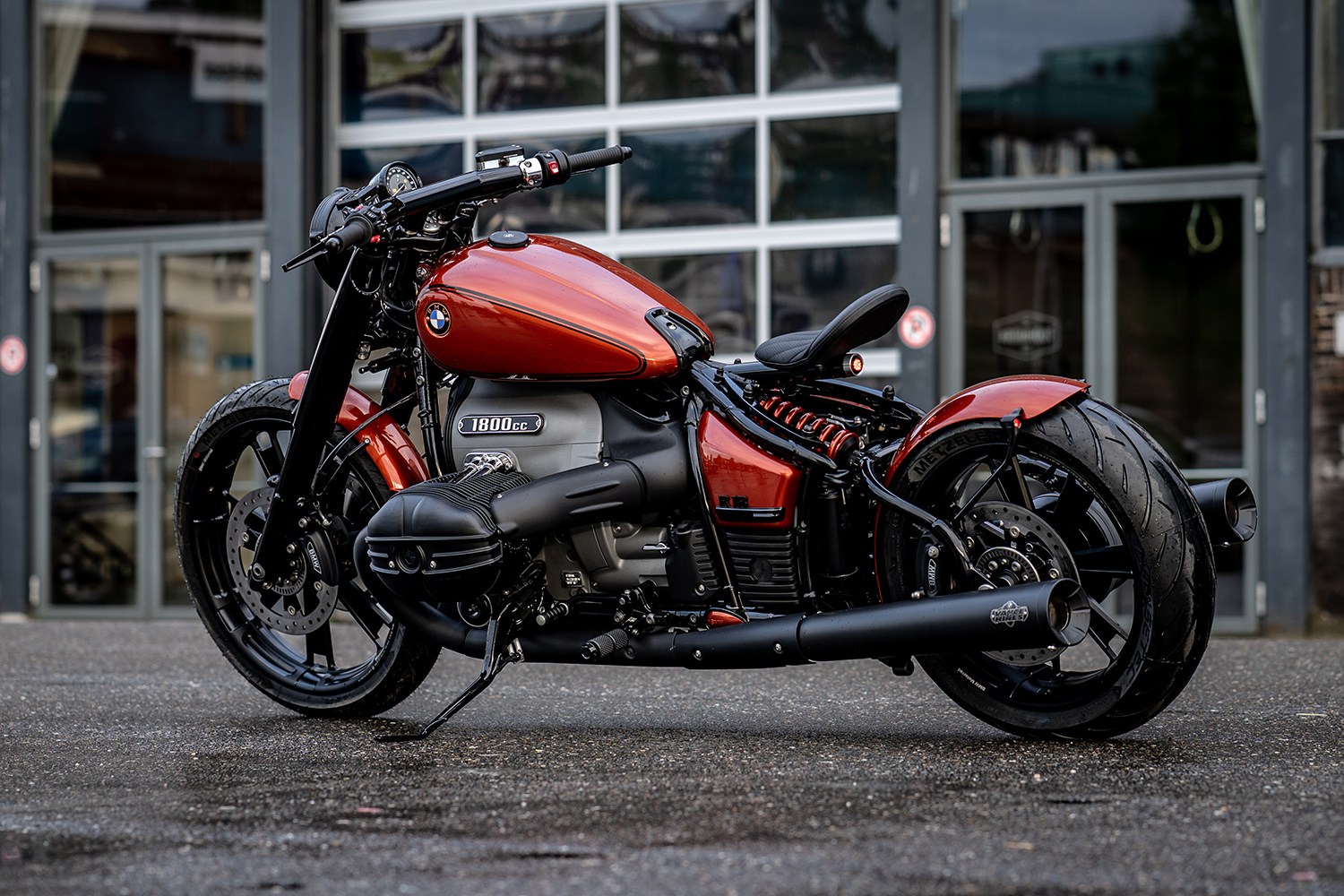 For the corporate folks at large multinationals, who happen to own motorcycle brands, those tattooed and bearded folk of the custom bike scene must be a terrifying bunch; of which I include myself. Sure we buy their products, but counter-culture people are not really those you want front and centre in your billion-dollar industry. Thankfully for the the boardroom at BMW Motorrad Nederland’s, their unofficial ambassadors include the supremely talented team at Ironwood Custom Motorcycles. So picking a builder to craft them a 2021 BMW R18 First Edition that could look good on showroom floors was as easy as picking up the phone to head honcho Arjan van den Boom.

“BMW Motorrad Nederland asked us to spice up the First Edition within a reasonable budget, short deadline and with the use of custom parts from their website. Basically, make it stand out at the dealer and be desirable for doubting R18 buyers. Not too radical and completely street legal but still with an Ironwood touch,” Arjan explained. With their bikes all over the internet, a partnership to sell Ironwood bikes in the US and more than 50 custom BMW R100 builds alone under their belt, it would have been impossible to find a better match.

Doing things in a conservative fashion has never been Arjan’s style, but on this more restrained build, he had in mind two elements that would bring a signature touch to the R18. First is “the custom seat post (designed together with my welder & friend Mervin) with pure Ironwood DNA as we have done 50 plus times on R100 Deathstars with our signature floating bobber seat.” Then it was over to Miller Kustom Upholstery who wrapped the handcrafted seat base. Instantly the bobber vibe is infused into the R18 and with the huge factory seat gone, the frame is allowed to shine through.

The second touch that Arjan wanted on the bike? “Thick handlebars, in collaboration with Harley Davidson custom handlebar specialist Paul from Agid.” But these aren’t just a bigger set of bars, they’re a thumping 1.5inches in diameter and make a visual statement all on their own, that’s a perfect match for the beefy factory fork covers. To continue the cohesive theme, the fork top covers were powder coated in a matching black by King Custom Coatingz. Onto the bars, the boys also added Black BMW R18 brake and clutch master cylinder covers, painted the speedo ring black and added a Roland Sands Design black headlight cover.

With the black piling up there needed to be a touch of colour to catch the customers eye and to spray it on, some new panel work was needed. At the front of the bike, the Ironwood team built a custom front fender to suit with an uber neat set of struts designed to mount on the stock location. The rear fender comes from ABM/Wunderkind and it too gets a cool set of struts, these with their own tail lights built-in. Then it was over to Jacco from Royal Kustom Works who waved his gun like a wizard in spraying down the gorgeous BMW Sunset Orange.

To show off the surprisingly good handling of the big BMW, the decision was made to improve it a step further and BMW suspension experts TFX Suspension were contacted. They put together a rear shock for the R18, excited to be able to be a part of the project, and even had the spring painted to match the bodywork. The rolling stock on such a project has to make a statement, it’s go big or go home and few do it better than Roland Sands Design. With Roland another custom builder working with BMW, he sent over a set of his wheels, 21-inch front and 18-inch rear. These are then wrapped up in a 120 section tyre at the pointy end and a fat 180 for the back, big, without ruining the handling.

Of course you can’t look at an R18 without seeing that thumping great big boxer twin and it too got some dress-up help from Roland. RSD supplied a black engine front cover and a set of blacked-out valve covers. To match the airbox side covers were given a hard-wearing cerakote finish in black with the airbox top cover finished in the same, this time applied with paint. The factory exhaust pipes were pulled off and cerakoted along with the heat shields, before a bolt-on set of Vance & Hines black exhaust mufflers, in the long configuration, finishes out the engine and unleashes a roar unlike anything else on the road.

Wanting to show the public the extent of the aftermarket that already exists for the bike, the levers, brackets & footpegs are all from Wunderkind, and are the sort of high-quality components everyone has come to expect from them. Finally, having pulled the majority of the stock lighting off, a set of Kellermann bar end indicators handles the turn signals, with the twin tail lights in the struts complemented by one of Ironwood’s own custom made 3rd brake lights in an aluminium holder under the seat. The build is killer and although constrained by the brief, Arjan has still managed to leave his signature mark, while demonstrating to the world that the BMW R18 is just begging to be made a kick ass custom.